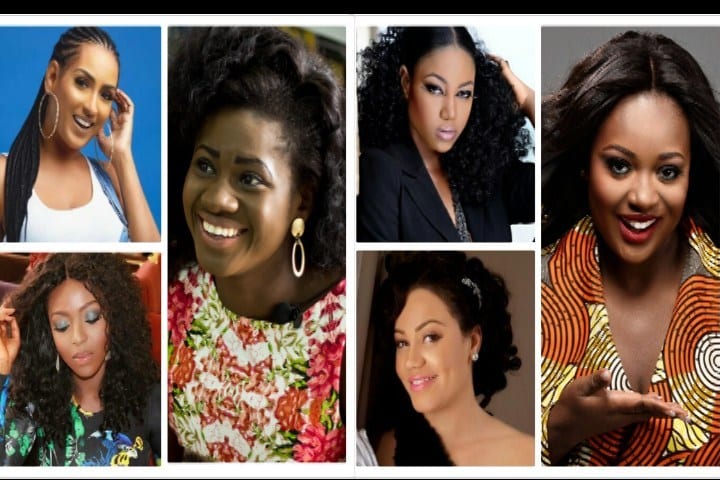 Richest actresses in Ghana 2023: Many know the Ghanaian movie industry as a home to some of the most beautiful and curvy women in Africa. They are not just beautiful only, they are also blessed with talents and they earn a lot from their awesome works on screens. Grab yourself a drink and keep reading as we unveil to you the top 10 most richest actresses in Ghana for the year 2023.

Read about the top 10 Richest Actresses in Ghana in this article.

Yvonne Nelson net worth is currently put at $900,000 making her the richest actress in Ghana. Yvonne Nelson is a Ghanaian actress who won the Miss Ghana 2005 Beauty Pageant, she has strived so hard to become one of the sought-after actresses in Ghana.

Nadia’s net worth is estimated at $800,000. She has starred in several movies both in Ghana and Nigeria. She has starred in over 100 movies. Nadia has also received several accolades including the  Special Recognition Award at Africa Magic Viewers Choice Awards.

She made her first acting debut in the 2007 film Crime to Christ starring Majid Michel. Juliet’s first Nollywood film was Yankee Boys and she has since featured in more than 50 films afterward

Joselyn believes in giving back to society, especially where children are concerned.

Her passion for philanthropic work led to the establishment of The Joselyn Canfor-Dumas Foundation (JCDF) to help address the needs of vulnerable children from all backgrounds and regions of Ghana.

The JCD foundation is currently undertaking a project with focus on Autism.

The ‘Madam Moke’ actress has acted in many movies and has numerous awards to her credit which includes Best/English Actress, Best Actress in Leading Role, Best Traditional movie and Best Story at the 2011 Kumawood Awards.

She made her screen debut in Sticking to the Promise. She has since starred in over 50 movies . she also owns her own company Desamour Company Limited. As well as other transport business.

In 2014, Ankomah signed an endorsement deal with Vitamilk Viora. Dusk Capital Limited, a Ghanaian Investment Bank in 2017 revealed Ankomah as their brand ambassador.

She has also worked with Globacom since 2018 as a brand ambassador. In 2018, Ankomah was named the brand ambassador for Ghana Textiles Printers’ (GTP) new fabric ‘Adepa Dumas’.

Ama is the founder of the “I Love My Natural Skintone. Say NO to Skin Bleaching” campaign, which she launched in 2014, it seeks to address issues of colorism and encourage Africans and people of color to embrace their natural skin tones and resist from the often harmful practice of skin bleaching.

She is an accomplished television presenter with over two decades experience. Ama K started her TV presenting career in her teens at YCTV in London. She has presented on BBC2, OBE TV, Viasat 1, TV3, Ebonylife TV and many more.

10th of the Richest Actresses in Ghana

Lydia was the 2010 winner of the African Movie Academy Award for Best Actress in a Leading Role. Forson’s acting career started with a cameo role in Hotel St. James in 2005. She is also a writer, and a producer.