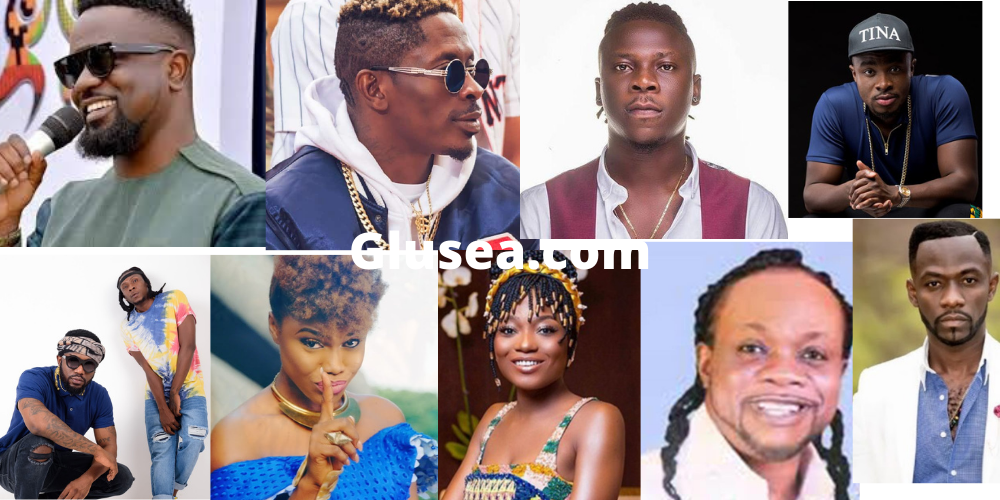 Michael Owusu Addo known professionally as Sarkodie is a Ghanaian rapper, songwriter and entrepreneur from Tema.

His contributions to the Ghanaian music industry have earned him numerous accolades, including the Vodafone Ghana Music Award for “Artiste of the Decade”. He was announced the first winner of BET’s Best International Flow artist at the 2019 BET Hip Hop Awards. He is also considered one of the major proponents of the Azonto genre and dance.

Shatta Wale has also set an example for other musicians in Ghana. He has been featured in a movie titled, Never Say Never where he has showcased his many talents as well. Shatta Wale’s net worth is estimated to be about $12 million. Being one of the most decorated artists in Africa, Shatta wale has featured on several international platforms. He is also the , most awarded dancehall artist in Africa

Shatta Wale attended Seven Great Princes Academy at Dansoman, a suburb in Accra, where he demonstrated an affinity for arts and acted in a popular drama series, By the Fireside, at the National Theatre of Ghana.

Shatta wale net worth is $15 million

Okyeame Kwame was born in Kumasi, Ashanti Region of Ghana. He is the third of six siblings.

He gained interest in rap music from a very young age, when he wrote his own songs and performed at local shows since his days at the Anglican Senior High School in Kumasi.

Kwame is a product of Kwame Nkrumah University of Science and Technology where he studied Akan and Sociology for his first degree with formal education in music under the tutelage of Dr Daniel Amponsah a.k.a Agya Koo Nimo. Agya Koo Nimo taught him Classical Guitar and Philosophy in African Music.

R2Bees is a Ghanaian hip hop and hiplife duo from Tema made up of two cousins, Faisal Hakeem (Paedae da Pralem/Omar Sterling) and Rashid Mugeez (Mugeez)

Both born and raised in Tema, east of the country’s capital city – Accra in Ghana, West Africa. Omar Sterling is the CEO and leader of the group, whilst Mugeez is the lead vocalist.

The two cousins, who have been together their whole life, lived in the same house and also attended the same primary, junior and senior secondary school in Tema.

Beginning their career early, they started off representing their school in rap competitions as well as inter school music contests. This led them to participating in popular radio competition Kasahare, which they won most of and also performed at most shows; gaining them more buzz under their stage name at that time.

R2bees are also recognised in the Ghanaian music industry as legends because of their outstanding achievements.

Livingstone Etse Satekla, better known by his stage name Stonebwoy, is a Ghanaian Afropop, dance hall and reggae singer. He is the CEO of Burniton Music Group.

Stonebwoy was born in Ashaiman in the Greater Accra region of Ghana and began making music in his early school days.

He realized his talents and abilities as a lyricist and scriptwriter at an early age, remembering writing and acting drama pieces as far back as his fourth year in primary school.

He studied at Methodist Day Secondary School the same year with rapper Sarkodie where he obtained his High School Certificate.

He continued his tertiary education at the University of Professional Studies to earn a degree in Marketing in 2013.

Stonebwoy net worth is $10 million

Nana Richard Abiona better known by his stage name Fuse ODG, is a Ghanaian-English afrobeats recording artist. He is best known for his singles “Antenna” and “Dangerous Love”, and for featuring on Major Lazer’s “Light It Up (Remix)”.

Born in London and raised in Ghana, Fuse returned to London for his secondary education, where he attended the Archbishop Lanfranc School, Croydon. He grew up in Mitcham, South London.

The stage name “Fuse” comes from his fusion of musical styles, as he is known for his unusual combination of genres such as Afro-pop, hip-hop, R&B, funk and rock. “ODG”, meanwhile, stands for ‘Off Da Ground’.

Fuse ODG net worth is $8 million

more on the Top 10 Richest Musicians in Ghana

Charles Kwadwo Fosu  aka Daddy Lumba is considered by many as the greatest Ghanaian musician of all time. He has released about 33 albums through out his illustrious career.

Daddy Lumba’s music career started at the age of 16. He was the leader of Juaben Senior High School choir from 1983 to 1984 academic year.

In Juaben SHS, Lumba formed the Lumba Brothers group with his friends Yaw and Kwabena and girlfriend, Theresa Abebrese.

After school, with the help of his girlfriend Theresa, Lumba travelled to Germany to seek greener pastures. His music career began during his stay in Germany.

He owns his own studio where he does all his work and also owns machines for mastering, cassette duplication, loading, printing and shrink wrapping exclusively for his works.

His music has evolved over the years to reflect the changes in taste and demands for music; he can currently be described as a contemporary highlife artist.

Rebecca Akosua Acheampomaa Acheampong is a Ghanaian singer, songwriter and actress. She first gained recognition as a contestant on the second season of TV3’s annual singing competition Mentor

Becca was born in Kumasi, Ghana. She is the first girl and fifth born of nine children.

She attended Morning Star and Wesley Girls’ High School. She took an interest in showcasing her vocal dexterity at talent shows held at the latter school. She graduated from Croydon College and became a child care and education worker.

Becca relocated to Ghana and signed with Kiki Banson’s EKB Records. She studied at the Ghana Institute of Management and Public Administration.

As a professional musician, Becca has released three albums and several hit singles. Currently Becca net worth is $7 million and she is among the top 10 richest musicians in Ghana list

Desmond Kwesi Blackmore  known by his stage name D-Black, is a Ghanaian anglophone hip-hop and Afrobeat musician and entrepreneur from.

D-Black began his career as an independent artist in the group D-Black & Kwaku T releasing a group album ‘Target Practice’. In 2010 D-Black and his rap partner both went solo.

He went on to release three albums (Music, Love and Life, The Revelation, Lightwork’ 1 E.P (Smoke and Mirrors) and 1 mix-tape (Hunger & Thirst) over the years. He has been nominated for numerous awards and won several, including the 2011 BET Awards.

D-Black is among the most successful Ghanaian musicians. He has a net worth of $7 million

Samini has released seven studio albums, with all being highly successful on the commercial market. Samini’s success and recognition began when his first single, Linda, was released and subsequently appearing on other successful singles by other artists.

Sammini started singing in a church choir at the age of 14 and became a professional musician after a musical collaboration with another musician in 1999.

His debut studio album, Dankwasere, was released in 2004; it topped the local music charts for weeks and won two awards at the Ghana Music Awards.

Jane Awindor better known by her stage name Efya, is a Ghanaian singer, songwriter, and actress from Kumasi. She is the daughter of Nana Adwoa Awindor, a filmmaker and celebrity host of the late television show Greetings From Abroad.

Efya got her first exposure to fame when she participated in the maiden edition of the Stars of the Future talent show. She has since become one of the best and most successful musicians in Ghana

Efya net worth is $4 million

Summary of the Top 10 Richest Musicians in Ghana 2022

Have any question about Top 10 Richest Musicians in Ghana? leave it in the comments section below