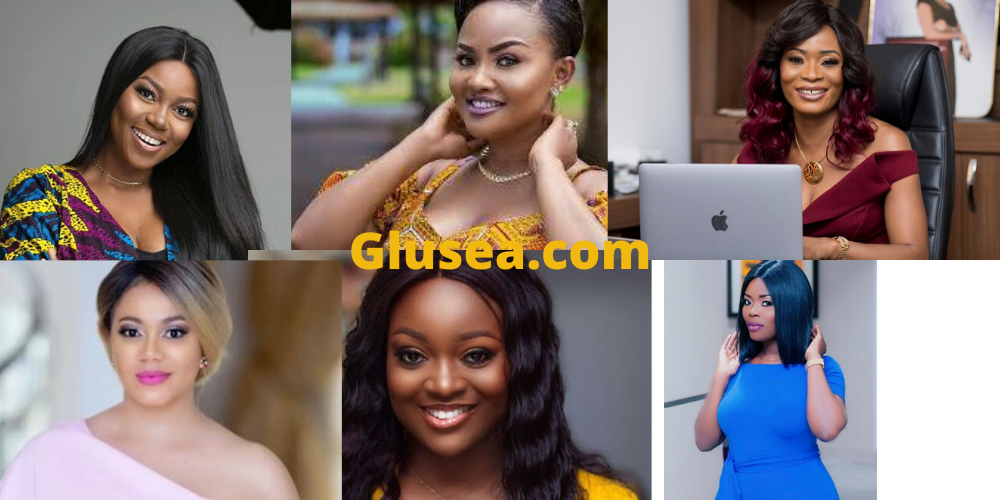 Nana Aba Anamoah is a seasoned journalist. She was the newscaster and host of the morning show for TV3. Nana Aba is currently the General manager of one television. The celebrated Journalist is also a member of the Women’s Premier League committee in Ghana. Nana Aba is one of the richest female celebrities in Ghana with a net worth of about $500,000

Joselyn’s started her career as a practicing paralegal in the States before moving back to Ghana. She has since become prominent in the entertainment industry both as an actress and a television host.

She is one of the most awarded actresses in Ghana under the “best actress category”. Dumas is worth $500,000. She also runs a YouTube Channel where she engages other celebrities on social issues.

Juliet Ibrahim has starred in over 50 movies since 2005. She is undoubtedly one of the most adored celebrities in Ghana. Juliet is also a movie producer and humanitarian activist. Juliet is among the wealthiest female celebrities list with a net worth estimation of $550,000

Nadia has been acting since 2005. She has made appearances in a lot of movies both in Ghana and Nigeria.

She has contributed a lot to the Ghanaian movies industry with her talent. Among her most outstanding recognitions is the  Pan African Actress award in 2013. Nadia is worth $800,000.

Jackie Appiah has starred in several movies. She been on many billboards and Tv commercials in Ghana. Jackie is one of the wealthiest female celebrities with a net worth of $800,000.

Yvonne Nelson has been active in the movie industry since 2000. She has starred in over 100 movies. She is also a successful movie producer.

Yvonne Nelson was awarded a special award at the “MTN Heroes of Change” in recognition of her charity work in fighting glaucoma. Yvonne Nelson is worth $900,000.

Nana Ama is best described as the most successful actress in Ghana. The madam “Hisense” TV ad diva stumbled into acting in 2001 after she was invited for a costuming job. She has since risen through the ranks to become the highest-paid Kumahood actress. She is worth about $ 1 million.

Delay is one of the celebrated TV personalities in the county. She started her career as a presenter at age 17 with Life FM in Nkawkaw.

She has been keen on her campaigns aimed at debunking assertions suggesting that African women are helpless and cannot stand on their own across the world.

Delay is currently the CEO of Maxgringo productions, owner of Delay mackerel and sardines, host of “the Delay Show”, among others. She is worth about $1.5 million

Her excellent performance around the world has earned her lots of awards and nominations. Becca has a net worth of$6.2 Million.

Joana Gyan is the wife of a popular Ghanaian musician, Keche Andrew. Joana is the  Founder and CEO of Golden Empire Legacy Limited. She is the founder of 15 companies.

She disclosed in an interview with Delay that her net worth is about $700 million. If the figure is so, Joana is the richest female celebrity in Ghana.