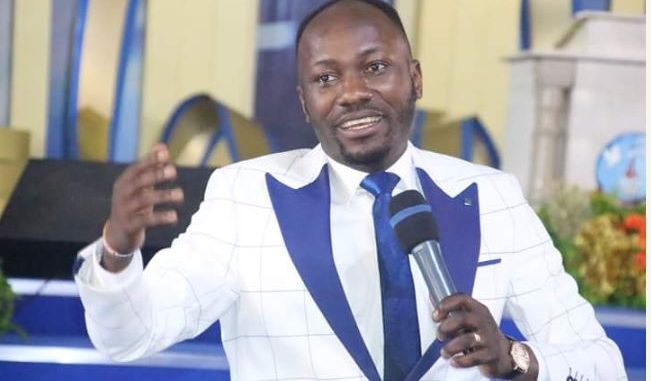 Apostle Johnson Suleman net worth is over $100 million. He is one of the richest pastors in Nigeria.

Johnson Suleman is a Nigerian televangelist and the senior pastor and general overseer of Omega Fire Ministries International, a church with its headquarters in Auchi, Edo State.

He was born on born 24 March 1971. After working as an assistant pastor in the Armor of God Church in Lagos from 1998, he started Omega Fire Ministries in 2004.

Among the fortunes owned by the man of God includes; record label, water manufacturing, printing press,oil & gas,group of schools and real estate. It is estimated that Johnson Suleman net worth is over $100 million. He own a mansion woth over N400m mansion

How Did Johnson Suleman Become a Preacher?

Callings and divine elections are purely products of predestination, which are conceived before the very foundation of the world and hatched into reality.A few days after he was born, some Prophets came from Warri to Benin (the place of his birth) with a message from God.When his parents desired to know what the message was, they said God told them “a prophet who would minister in God’s presence has been born.

His parents refused to listen further because they were Muslims and did not see the possibility of their son leaving their fold. As the young Johnson began to grow, his parents noticed that he was a bit strange in the way he did his things.

He had a soft spot for the things of God, even while he was going to the mosque with his father; he knew he was not on the right path. He was in Auchi his hometown for his secondary education and encountered CHRIST but pressures mounted on him made him to withdraw for a little while. But he returned to Benin where he finally reconnected with DESTINY. He started moving out with the brethren for evangelism and prayers.

On June 20th, 1994, he had a revelation; the image of the globe was being given to him with Acts 10:38 written on it. Prior to this time, he had read through the entire Bible three times because his thirst for God was insatiable but all through his study, he had not given special attention to Acts 10:38. He was so shocked when he recovered from the vision and checked out what the scriptures reveals.

“How God anointed Jesus of Nazareth with the Holy Ghost and with power: who went about doing good and healing all that were oppressed of the devil, for God was with Him” — Acts 10:38. That was when he understood the Mandate given to him by God to take the gospel around the world with a Power Ministry