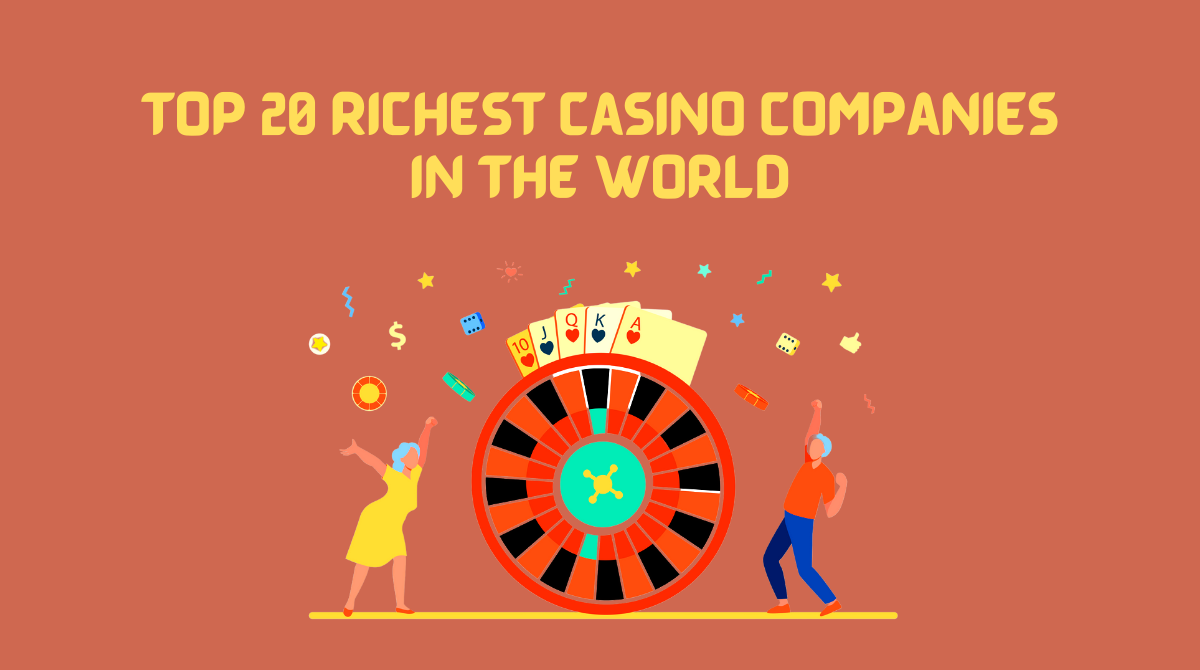 Gambling has been around since ancient times, and it has never lost its popularity so far. There are millions of people who prefer to play casino games, sports betting, or even poker in real money mode on the Internet than going to land-based casinos because they feel more comfortable in the virtual space with no limitations in place as long as they have access to the web and their credit cards or e-wallets ready.

Since this type of online entertainment has gained popularity, many online casino companies have emerged over the years, and some of them are considered leaders in their respective markets. Read Top 10 Richest Betting Companies in the world

Here’s a list of the top 20 richest Casino companies in the world as per the data of 2022.

Flutter Entertainment is a major industry player in Casino. The company is well-represented in the online and retail segments and has merged with The Stars Group. It owns Adjarabet and BetEasy, FanDuel, Fox Bets, FanDuel and Fox Bets, and Full Tilt Poker. Paddy Power, PokerStars.com.au, Timeform.com.au, TGV Network.

Caesars Entertainment is a leading online casino companies. In the wake of the acquisition of Caesars, its namesake brand, Eldorado Resorts, was rebranded.

Evolution, another giant, was a victim of M&A fever in 2020. They completed the acquisition NetEnt. This caused some controversy. Evolution laid off employees following the acquisition of NetEnt and closed the NetEnt Live Studio.

Catena Media is a respected and successful affiliate and marketing company in the online Casino. The business generates revenues of approximately EUR100 million annually and EUR106.0 million for 2020. However, Catena Media is still at the forefront of promoting gambling products responsibly, safely, and value-addedly.

Better Collective is a media company in the iGaming, sports betting, and gaming industry that has created numerous platforms to educate consumers about responsible gambling and safe gambling options.

Sheldon Adelson, a late casino mogul, founded Las Vegas Sands in 1988. Adelson was a pioneering gambling visionary. He believed that conventions could drive gambling interest. This led to a series of ambitious megaprojects that gave rise to Las Vegas Sands dominance not only on the Las Vegas Strip but also in Macau.

Bet365 is one of the most successful privately held betting companies. Denise Coates is the boss of Bet365 and is the highest-paid female executive in the United Kingdom.

Kindred Group is among of the largest casino companies on the globe. The group currently owns nine gambling brands, including Unibet and 32Red. These brands have attracted steadfast interest in the largest gambling markets worldwide, including the United States.

VGC Holdings issues and speculation about a probe into possible Wirecard connections led to Entain’s rebranding. Entain has been doing well since then. Entain is committed to sustainability and player well-being.

Scientific Games, one of the oldest US gaming companies, is a leader in providing unique products for all kinds of players. Although the company was originally a manufacturer for pari-mutuel wagering and totalizator systems, it soon adapted to digital technology. It brought its OpenGaming content aggregate platform to the table and provided many opportunities for consumers and businesses.

Also Read: How to Choose a Reputable Real Money Casino

888 Holdings, one of the largest casino companies worldwide, is the first to launch its products. These include technological solutions, game development, and dedicated gaming sites. The 888 brands are well-known for their online casino, sports betting solutions, and poker rooms.

International Game Technology, also known as IGT, is a leading manufacturer of online and physical slot machines. IGT continues to form partnerships in many global markets and has increased its presence in the interactive gambling and iGaming sectors of the United States.

Tabcorp is Australia’s largest gambling company. Tabcorp has many operations in various sectors, including lotteries and casino gaming. It also operates in media. Several companies have made numerous buyout bids to acquire the company’s media- and wagering division, including Entain.

Genting Group is a among the leader casino companies worldwide, focusing on establishing a physical presence throughout Asia and the rest. A global lockdown has impacted the company’s properties around the globe, including Malaysia, Hong Kong, Singapore, and the Philippines.

Wynn Resorts is one of the most important casino companies worldwide. It has global operations as well as a strong presence in the United States. Wynn has dedicated, state-of-the-art venues in Las Vegas. Wynn Las Vegas is home to Encore Las Vegas as well as Encore Macau, Wynn Palace, Wynn Palace, and Encore Boston Harbor.

Penn National Gaming is well-known because of its large casino in the United States. Penn was founded in 1972 and had 43 properties across the United States and Canada. The company’s most prominent brand is Hollywood Casino. The company was founded by racehorse track builders and capitalized on new opportunities for thoroughbred horse racing, pari-mutuel betting, and thoroughbred horse racing.

The casino is stunning inside and out. The casino’s exteriors are stunning and beautiful at night. You will find it hard to find a spot inside that doesn’t offer beautiful views. The Venetian is not only a casino, but also a hotel. It offers several luxurious rooms to its guests. There is also the casino. The Venetian boasts 550,000 square feet in gaming and gambling space.

DraftKings was one of the first companies in North America to offer daily fantasy sports (DFS) and is the only company licensed to operate in the United States. DraftKings can quickly establish a presence in almost every state of the country, thanks to local regulations. This allows them to offer a familiar and intuitive product for sports betting.

Boyd Gaming, founded alongside other notable gambling companies in 1975, has a strong presence in the gaming sector. Boyd Gaming’s most recent report shows that the company has generated $4.68 billion.