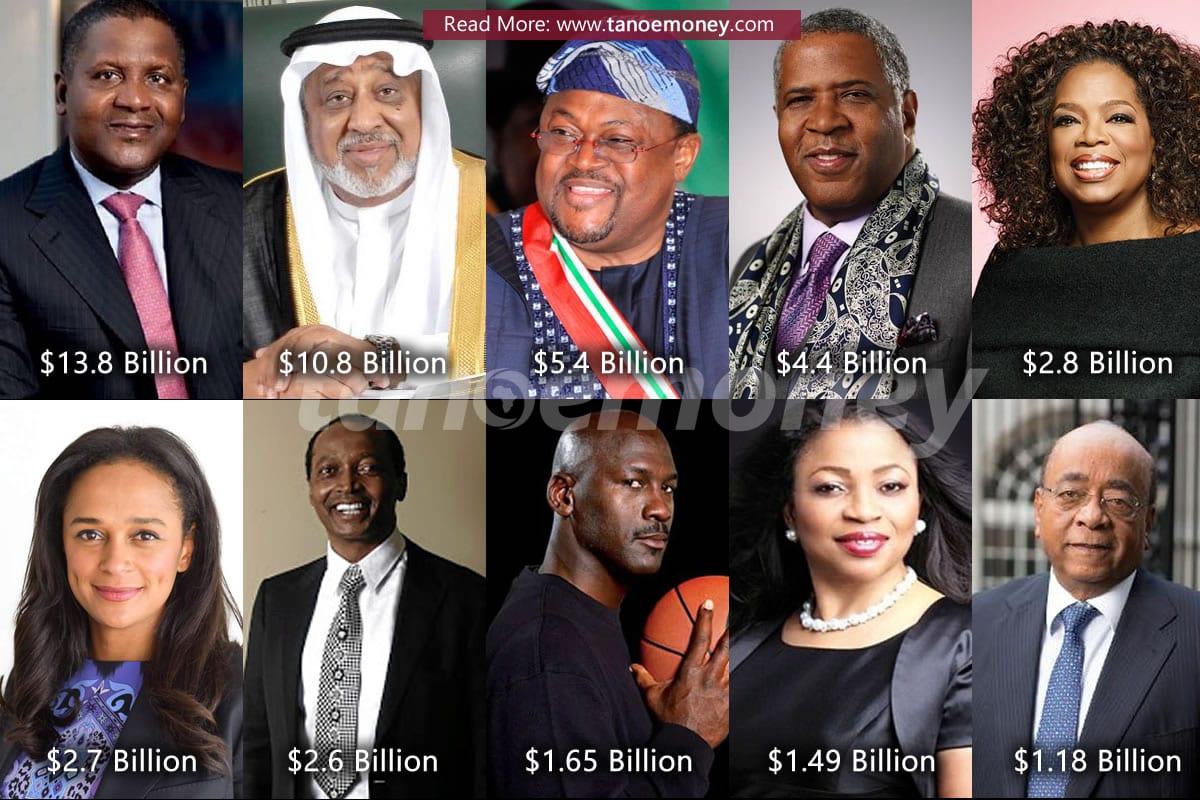 Top 10 richest men in Africa 2023: Africa has some of the fastest growing economies in the world. With vast natural resources and a youthful population, Africa is a destination for all sorts of investments. It is no surprising that the number of billionaires keep increasing in the African continent.

Top 10 wealthiest men in Africa is a list sourced from the annual ranking of the wealthiest self made Africans by American multinational magazine Forbes.

According to the Magazine, even though the coronavirus pandemic negatively affected every economy in the world. However, for some businessmen, it was an opportunity to cash in on sales.

The current list of the top 10 affluent men in Africa has no new comer. the list is dominated by the same old faces. The list is made up of billionaires from just four countries namely; Nigeria, South Africa, Egypt and Algeria

Nigerian business mogul and president of Dangote group Aliko Dangote has for the 10th time in a row retained his spot as the richest man in Africa. Keep reading as we bring to you the full list of the top 10 richest men in Africa.

Aliko Dangot is the richest in Africa.

He is is a Nigerian business magnate, investor, and owner of the Dangote Group, which has interests in commodities in Nigeria and other African countries. He has an estimated net worth of US$12.1 billion.

He is the president and chairman of Dangote Group of companies.

The Dangote Group was established as a small trading firm in 1977, the same year Dangote relocated to Lagos to expand the company.

Today, it is a multi trillion-naira conglomerate with many of its operations in Benin, Ghana, Nigeria, Zambia and Togo. Dangote has expanded to cover food processing, cement manufacturing, and freight.

The Dangote Group also dominates the sugar market in Nigeria and is a major supplier to the country’s soft drink companies, breweries, and confectioners. The Dangote Group has moved from being a trading company to be the largest industrial group in Nigeria including Dangote Sugar Refinery, Dangote Cement, and Dangote Flour.

Coming second on our list of top 10 richest men in Africa is Nassef Sawiris.

Nassef Sawiris is an investor and a scion of Egypt’s wealthiest family. His most valuable asset is a nearly 6% stake in sportswear maker Adidas

He runs OCI, one of the world’s largest nitrogen fertilizer producers, with plants in Texas and Iowa; it trades on the Euronext Amsterdam exchange.

Sawiris holdings include stakes in cement giant Lafarge Holcim and Adidas; he sits on the supervisory board of Adidas.

Nassef Sawiris received his secondary education from the Deutsche Evangelische Oberschule Kairo. He then continued at University of Chicago where he received a bachelor’s degree in economics in 1982. Sawiris is a member of Egypt’s Coptic Christian minority.

With a net worth of $9 billion, Nassef Sawiris is the richest man in Egypt and one of the top 10 wealthiest men in Africa currently.

The family runs a generation business Da Beers, of which Nicky is the heir currently.

For 85 years until 2012, the Oppenheimer family occupied a controlling spot in the world’s diamond trade.

Oppenheimer is the son of Bridget and Harry Oppenheimer, and grandson of Anglo American founder Ernest Oppenheimer . His father was of German Jewish descent.

He was educated at Harrow School and Christ Church, Oxford, where he read Philosophy, Politics and Economics, earning an Oxford MA.

Nicky Oppenheimer is the third richest in Africa with a net worth of $8 billion according to Forbes.

Ranking 4th on the famous list of top 10 richest men in Africa is  Johann Rupert & family.

Johann Peter Rupert is a South African-born entrepreneur, who is the eldest son of business tycoon Anton Rupert and his wife Huberte.

Rupert grew up in Stellenbosch, where he attended Paul Roos Gymnasium and the University of Stellenbosch, studying economics and company law.

Rupert & family is ranked the second richest in South Africa and the 4th of the top 10 richest in Africa.

Mike Adenuga is the 5th richest man in Africa. He is a Nigerian billionaire businessman

His company Globacom is Nigeria’s second-largest telecom operator, which has a presence in Ghana and Benin. He owns stakes in the Equitorial Trust Bank and the oil exploration firm Conoil (formerly Consolidated Oil Company)

He worked as a taxi driver to help fund his university education. Mike went on to graduate from Northwestern Oklahoma State University and Pace University, New York, with degrees in Business Administration.

Mike Adenuga net worth is $6.2 billion making him one of the top 10 men in Africa

Another one of the top 10 richest men in Africa is a Nigerian businessman and philathropist Abdul Samad Isyaku Rabiu.

He is the founder and chairman of BUA Group, a Nigerian conglomerate concentrating on manufacturing, infrastructure and agriculture and producing a revenue in excess of $2.5 billion. He is also the chairman of the Nigerian Bank of Industry (BOI).

Abdul Samad Rabiu was born in Kano in the north-western part of Nigeria, where he obtained his early education. He attended Capital University in Columbus, Ohio and returned to Nigeria at the age of 24 to oversee the family business.

Today, the BUA group is among the successful companies in Africa and Abdul Samad Rabiu is among the top 10 richest men in Africa with a net worth of $5.5 billion

Issad Rebrab is an Algerian billionaire businessman, CEO of the Cevital industrial group, the largest private company in Algeria, active in steel, food, agribusiness and electronics.

After graduating from a professional school, Rebrab taught accounting and commercial law. He soon left teaching, and started his own accounting firm.

His industrial career started in 1971, when one of his clients proposed he take shares in a metallurgical construction company. He took 20% of the shares in Sotecom. After that, he created other companies in the steel industry: Profilor in 1975 and Metal Sider in 1988.

Cevital owns one of the largest sugar refineries in the world, with the capacity to produce 2 million tons a year.

Issad Rebrab’s success in business has established him as one of the richest Arabs and also among the top 10 richest men in Africa.

Naguib Sawiris is the eldest of three brothers. His brothers are Nassef Sawiris and Samih Sawiris. He is the son of Onsi Sawiris who established the Orascom Group.

He built a fortune in telecom, selling Orascom Telecom in 2011 to Russian telecom firm VimpelCom (now Veon) in a multibillion-dollar transaction.

Since joining Orascom, the family business in 1979, Sawiris has contributed to the growth and diversification of the company into what it is today one of Egypt’s largest and most diversified conglomerates and the country’s largest private sector employer.

Naguib Sawiris net worth is $3.2 billion and he is among the top 10 richest men in Africa list

Another one of the top 10 richest men in Africa list is Patrice Motsepe. He is a South African mining billionaire businessman and the current president of  Confederation of African Football (CAF).

Patrice is the founder and executive chairman of African Rainbow Minerals, which has interests in gold, ferrous metals, base metals, and platinum.

He sits on several company boards, including being the non-executive chairman of Harmony Gold, the world’s 12th largest gold mining company, and the deputy chairman of Sanlam.

In 2016, he launched a new private equity firm, African Rainbow Capital, focused on investing in Africa.

Motsepe also has a stake in Sanlam, a listed financial services firm, and is the president and owner of the Mamelodi Sundowns Football Club.

Jacobus Petrus “Koos” Bekker  is chairman of emerging markets media group Naspers. The company operates in 130 countries, is listed on the London and Johannesburg Stock Exchanges, and has the largest market capitalization of any media company outside the US and China. Read Arthur Eze net worth

He holds an MBA from Columbia University, New York and an honorary Doctorate in Commerce from Stellenbosch University.

In the 1990s, he was a founding director of mobile communication company MTN. In 1997 Bekker became CEO of Naspers, one of the initial investors in the M-Net/Multichoice group.

Koos Bekker net worth is $2.3 billion and he among the top 100 richest people in africa

Read the Richest people in the world

ohamed Mansour is an Egyptian billionaire businessman and former politician. He is the chairman of Mansour Group, a US$6 billion conglomerate that is the second largest company in Egypt by revenue.

Mohamed Mansour was born into one of the most prominent business families in Alexandria. The family business, Mansour Group, controls nine of Egypt’s top Fortune 500 companies

Mansour gained an engineering degree from North Carolina State University in 1968, and a master’s in business administration from Auburn University in 1971, teaching there until 1973.

Mohammed Mansour is one of the wealthiest men in Africa with a net worth of $2.5

What do you think about the top 10 richest men in Africa? leave your reply in the comments below