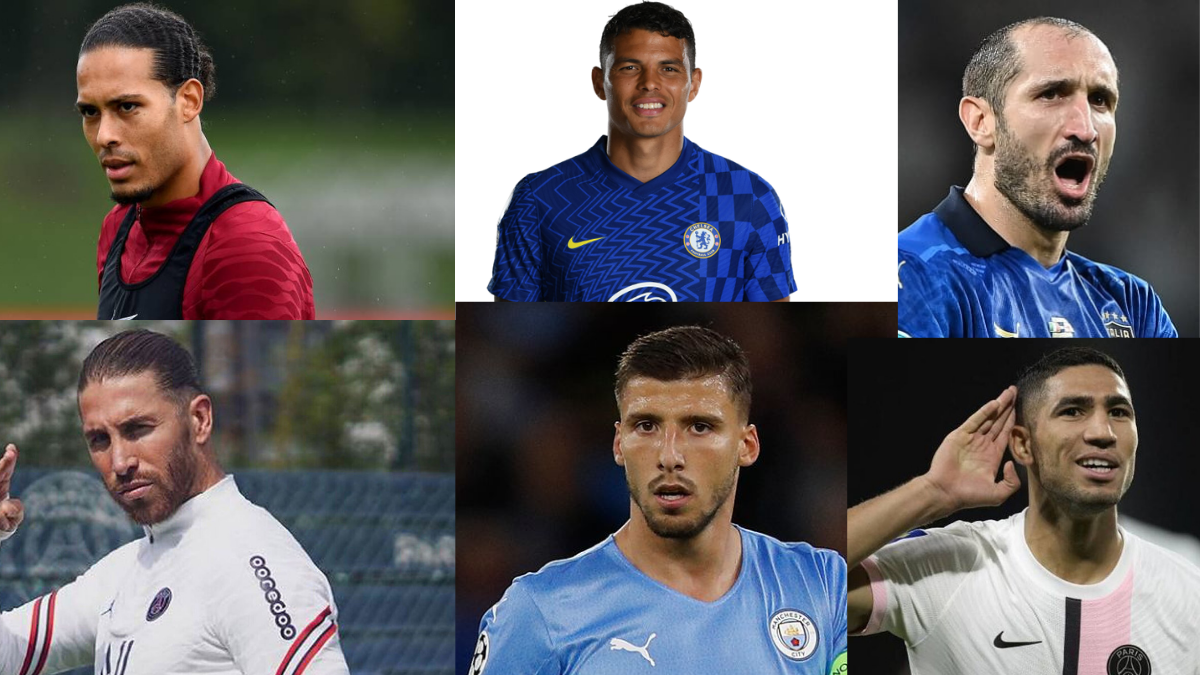 Choosing the best defenders in the world often does not come easy as the is no obvious criteria for selection as in the case of strikers where the number of goals are taken in consideration.

Even though the is no direct metric for choosing the best defenders in the world, It is still very possible to rank center-backs based on their contribution to the success of their teams.

Top 10 Richest Footballers in the world

Top 10 Richest Midfielders in the world

Top 10 Best Defenders in the world

In this article, we will be using the performances of the footballers in their respective clubs and countries. Keep reading as we unveil to you the top 10 best defenders in the world.

Rúben dos Santos Gato Alves Dias  is a Portuguese professional footballer who plays as a centre-back for Premier League club Manchester City and the Portugal national team. Considered one of the best defenders in the world, Dias is known for his strength, leadership, passing and aerial ability.

Dias came through Benfica’s youth academy. He began playing for Benfica B in 2015 and was promoted to the first-team in 2017, and was named the Primeira Liga’s Young Player of the Year.

He signed for Premier League club Manchester City in September 2020 for a reported fee of €68 million, becoming the second-highest fee for a Portuguese player leaving the domestic league.

Dias won the league title and EFL Cup in his first season, while also guiding the club to their first UEFA Champions League final.

Virgil van Dijk is a Dutch professional footballer who plays as a centre-back for Premier League club Liverpool and the Netherlands national team. Considered one of the best defenders in the world, Van Dijk is known for his strength, leadership and aerial ability.

He is the only defender to win UEFA Men’s Player of the Year, and has finished runner-up for the Ballon d’Or and Best FIFA Men’s Player.

After beginning his professional career with Groningen, Van Dijk moved to Celtic in 2013, where he won the Scottish Premiership and was named in the PFA Scotland Team of the Year in both of his seasons with the club, also winning the Scottish League Cup in the latter.

In 2015, he joined Southampton before signing for Liverpool in January 2018 for £75 million, a then-world-record transfer fee for a defender.

Van Dijk is a former youth international for the Netherlands, representing his country at under-19 and under-21 levels.

He made his senior international debut for the Netherlands in 2015 and assumed full captaincy of the national team in March 2018.

The following year, Van Dijk captained the Netherlands to the final of the inaugural UEFA Nations League, where they finished runners-up.

Thiago Emiliano da Silva is a Brazilian professional footballer who plays as a centre back for Premier League club Chelsea and captains the Brazil national team. He is regarded as one of the best defenders of all time.

Silva began his senior club career in 2002 playing as a midfielder for RS Futebol, and transitioned to a defensive position while at Juventude.

In 2012, Silva was the subject of a then-record association football transfer when he signed for Paris Saint-Germain in a transfer worth up to €42 million, becoming the most expensive defender ever at the time.

Silva holds the record as the club’s longest ever serving captain and ranks eight-highest all-time for appearances.

In 2020, he signed for Chelsea on a free transfer, and won the UEFA Champions League in his first season at the club.

Silva made his senior international debut for Brazil in 2008, at age 23, and has since earned over 100 caps, including appearing in seven major tournaments.

He won a bronze medal in the 2008 Olympics and a silver medal at the 2012 Olympics, and later served as captain as Brazil won the 2013 FIFA Confederations Cup and finished fourth at the 2014 FIFA World Cup.

Giorgio Chiellini Ufficiale OMRI  is an Italian professional footballer who plays as a defender and captains both Serie A club Juventus and the Italy national team.

Chiellini is a physically strong and aggressive defender who is also capable of playing as a left-back, both in a three or four-man defence.

He is regarded as one of the best defenders of his generation.

At club level, Chiellini began his career with Livorno in 2000, also later playing for Roma and Fiorentina, before moving to Juventus in 2005.

With Juventus, he has won a record-nine consecutive Serie A titles from 2012 to 2020, as well as five Coppa Italia titles and five Supercoppa Italiana titles, having also played two UEFA Champions League finals in 2015 and 2017.

He made his international debut for Italy in 2004, and currently has a total of 114 caps, making him Italy’s sixth-highest appearance holder.

Sergio Ramos García  is a Spanish professional footballer who plays for Ligue 1 club Paris Saint-Germain and the Spain national team.

He most notably played as a centre-back for Real Madrid for 16 seasons, whom he captained for six seasons.

He has previously played as a right-back earlier in his career. Known for his goalscoring capabilities and leadership skills, he is widely considered as one of the greatest defenders and captains in the history of the sport.

Additionally, Ramos has been named La Liga’s Best Defender a record five times, and to the La Liga Team of the Season in 2015–16. In 2021, he joined Paris Saint-Germain on a free transfer.

He made his first appearance for Spain at the age of 18 and, in 2013, he became the nation’s youngest player to ever reach 100 caps.

Ramos currently holds the record as the most capped player in the history of the Spanish national team, and is his country’s eighth-highest all-time goalscorer.

He also holds the record of most international victories for Spain with 131 matches won.

Jordi Alba Ramos is a Spanish professional footballer who plays as a left-back for La Liga club Barcelona and the Spain national team.

Alba started his career at Barcelona, but was released after being deemed too small. After joining Cornellà, he moved to Valencia.

In 2012 he returned to Barcelona, with whom he has won sixteen major honours, including five La Liga titles, five Copas del Rey and one UEFA Champions League.

After winning 23 caps and scoring one goal at youth level, Alba made his senior debut for Spain in 2011.

Achraf Hakimi Mouh is a professional footballer who plays as a right wing-back for Ligue 1 club Paris Saint-Germain and the Morocco national team.

Hakimi came through Real Madrid’s youth academy. He began playing for Real Madrid Castilla in 2016 and was promoted to the first-team in 2017, playing a few minutes with the latter.

He was sent on two-year loan deal to Bundesliga side Borussia Dortmund, winning the DFL-Supercup in 2019.

After a successful loan with Dortmund, Hakimi signed with Serie A side Inter Milan for a reported fee of €40 million, with his performances helping the club win the league title, ending the club’s eleven-year league title drought.

His performances sparked the interest of several European clubs, with Paris Saint-Germain signing him in 2021 for a reported fee of €60 million.

Born in Spain to parents from Morocco, Hakimi represented Morocco at various youth levels, before making his international debut in 2016 aged 17, after previously being capped by the nations’s youth teams at under-20 and under-23 levels.

He was chosen in Morocco’s squads for the 2018 FIFA World Cup and 2019 Africa Cup of Nations.

Mats Julian Hummels is a German professional footballer who plays as a centre-back for Bundesliga club Borussia Dortmund and the Germany national team.

He came through the Bayern Munich youth academy before joining Borussia Dortmund on loan in January 2008 and officially signing for Dortmund in February 2009 for €4 million.

His honours at the club include two league titles and finishing as runner up in the 2012–13 UEFA Champions League. In May 2016, Hummels signed a contract with former side Bayern, which took effect on 1 July 2016.

João Pedro Cavaco Cancelo is a Portuguese professional footballer who plays either as a right back, left back or right winger for Premier League club Manchester City and the Portugal national team. He is regarded as one of the best full-backs in the world

He has since won a Premier League title and a League Cup with the club. In 2020–21, he had a significant role in Manchester City reaching their first UEFA Champions League final.

Marcos Aoás Corrêa, known as Marquinhos, is a Brazilian professional footballer who plays as a defender for Ligue 1 club Paris Saint-Germain, which he captains, and the Brazil national team.

Mainly a central defender, he can also play as a right-back or a defensive midfielder. Marquinhos is considered one of the best defenders in the world

He began his career at Corinthians, and after winning the 2012 Copa Libertadores he moved to Roma for an eventual fee of €3 million.

In July 2013, he moved to Paris Saint-Germain for €31.4 million on a five-year contract, one of the highest fees for a player under the age of 20

He has won 23 trophies at the club, including six Ligue 1 titles. Marquinhos played less frequently after the acquisition of compatriot David Luiz in 2014, returning to an integral role after the latter was sold in 2016.

Marquinhos made his full international debut for Brazil in 2013, and was part of their under-21 side which won the 2014 Toulon Tournament.

Kalidou Koulibaly is a professional footballer who plays as centre-back for Serie A club Napoli and captains the Senegal national team.

Koulibaly began his professional club career with French team Metz in 2010, before moving to Belgian club Genk in 2012, winning the Belgian Cup in his first season.

He joined Italian team Napoli in 2014, where he won the Supercoppa Italiana title; he also won the Coppa Italia in 2020.

As Koulibaly was born in France to Senegalese parents, he was eligible to represent both nations at international level, and initially played for the France national under-20 football team.

He later made his senior debut with Senegal in 2015 and was a member of the Senegal squad that took part at the 2017 Africa Cup of Nations.

He was named to the side that represented Senegal at the 2018 FIFA World Cup the following year, and subsequently helped his team to the final of the 2019 Africa Cup of Nations.

Alessandro Bastoni Cavaliere OMRI  is an Italian professional footballer who plays as a centre-back for Inter Milan and the Italy national team.

Summary of Top 10 Best Defenders in the world

Here is a recap of the Top 10 Best Defenders in the world;

Leave your reply in the comments below