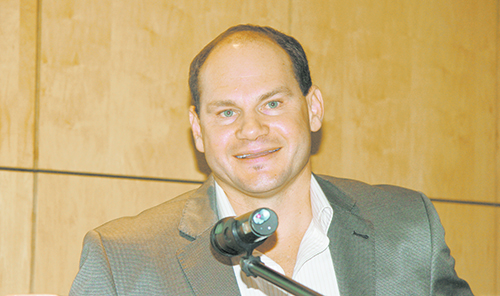 Glusea brings to you the richest man in Namibia

A few Namibians have built multi-million and billion dollar empires in industries as diverse as agriculture, food, construction, energy and distribution and earned multi-million dollar fortunes to boot. Their names don’t ring with the African public, and you’ve probably never heard about them before, but they are very successful — and very wealthy.

Tony Pupkewitz is the richest man in Namibia. He is is the oldest child of Harold Pupkewitz – arguably one of the greatest empire builders in Namibia’s recent history.

Harold Pupkewitz, who died in April 2012 after a heart attack, built his conglomerate, Pupkewitz Holdings, into Namibia’s largest private company.

Pupkewitz Holdings is home to such blue chips as Pupkewitz Motors – the largest dealer of Toyota, Nissan and Honda cars in Namibia; and Megacell, the country’s largest distributor of Nokia, Samsung and Apple products.

The group’s real estate arm, Pupkewitz Properties, is one of the largest owners of commercial and residential real estate in Namibia.

Tony Pupkewitz, who spends a lot of his time in Cape Town, is a Photographer, and heir apparent. He is part of the richest in Africa

Another richest man in Namibia.

In 1992, Quinton-van-Rooyen, 52, founded Trustco Group Holdings. It is now one of the largest diversified financial services groups in Southern Africa with interests in banking and finance, insurance, and asset management.

Van-Rooyen owns more than a 20% stake in the company, which is dual-listed on the Namibia and Johannesburg Stock Exchange. His stake in Trustco alone is valued at more than $50 million.

Other interests include food manufacturer Bokomo Foods Namibia, sugar producer Tongaat Hulett Namibia and hotels Frans Indongo Lodge and Protea Hotel Walvis Bay among other interests. His net worth is estimated at $1.3 billion

The only daughter of legendary Namibian tycoon Harold Pupkewitz runs the Pupkewitz Foundation, the philanthropy which channels hundreds of thousands of dollars annually to causes in education, health, sport, civil society, environment and culture promotion.

Her father parlayed a small family trading business into Pupkewitz Holdings, one of Namibia’s largest privately held conglomerates of which she is heir along with her brother, Tony Pupkewitz.

Pupkewitz Motors, a subsidiary of the group is the largest dealer of Toyota, Nissan, and Honda cars in the country.

The group also has extensive interests in real estate and irrigation services and is also the largest distributor of Nokia, Samsung and Apple products in the country. Her late husband, Phil Barry, died in a motorcar accident along with their son.

Thieme now calls the shots and serves as the company’s executive chairman and leading shareholder. Ohlthaver & List, which has annual revenues of more than $400 million and more than 5,000 employees, owns Namibia Breweries Limited, the largest producer of beverages in the country.