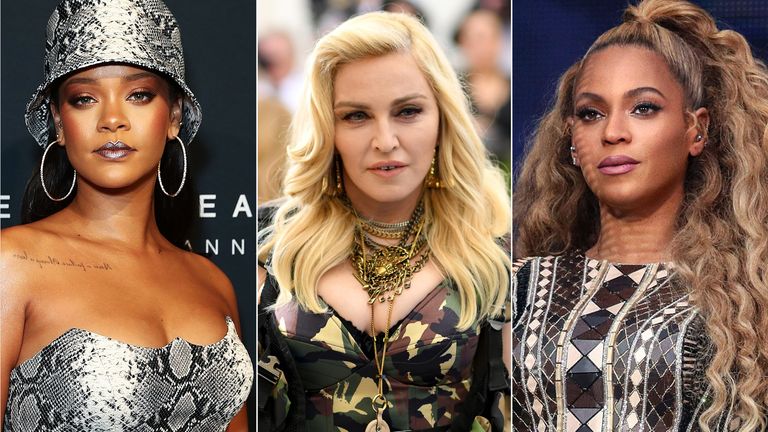 Richest Female Musicians in the world

Rihanna is the richest female musician in the world. She has a net worth of $1.7 billion. Rihanna is one of the highest selling musical arts in the world.

Second is Dolly Parton, who is also worth an estimates $600 million. She is an American singer, songwriter, multi-instrumentalist, actress, author, businesswoman, and humanitarian, known primarily for her work in country music.

Parton’s music includes Recording Industry Association of America (RIAA)-certified gold, platinum and multi-platinum awards. She has had 25 songs reach No. 1 on the Billboard country music charts, a record for a female artist (tied with Reba McEntire). She has 44 career Top 10 country albums, a record for any artist, and she has 110 career-charted singles over the past 40 years

Next on the list is Madonna with a net worth of $570 million. She is often been described as the queen of pop. She is also known for pushing the boundaries of artistic expression in mainstream music while remaining completely in charge of every aspect of her career. Her works, which incorporate social, political, sexual, and religious themes, have generated both critical acclaim and controversy. Madonna is often cited as an influence by other artists.

More on Richest Female Musicians in the World Top 20 List

Gloria Estefan is a Cuban-American singer, songwriter, actress and businesswoman.

Estefan won an MTV Video Music Award, was honored with the American Music Award for Lifetime Achievement, as well as being named BMI Songwriter of the Year. She was inducted into the Songwriters Hall of Fame and has received multiple Billboard Awards. She is also on the Top 100 Greatest Artists of All Time lists of VH1 and Billboard.

Richard Blanco, the 2013 Presidential Inaugural Poet, author of “How to Love a Country”, told the Boston Globe that Gloria Estefan is among the Latin singers who helped him to ground “ in the musical poetry of my culture and rejuvenate my spirits”.

Céline Marie Claudette Dion is a Quebecois Canadian singer. She is renowned for her powerful, technically skilled vocals, and remains the best-selling Canadian recording artist and one of the best-selling artists of all time with record sales of over 200 million worldwide. She is one of the richest female musicians in the world.

Eilleen “Shania” Twain is a Canadian singer and songwriter. She has sold over 100 million records, making her the best-selling female artist in country music history and among the best-selling music artists of all time. Her success garnered her several honorific titles including the “Queen of Country Pop”. While Billboard named her as the leader of the ’90s country-pop crossover stars.

Victoria Caroline Beckham is an English singer, fashion designer and television personality. She rose to prominence in the 1990s as a member of the girl group the Spice Girls, in which she was nicknamed Posh Spice. With over 90 million records sold worldwide,