Richest Racing Drivers in the World 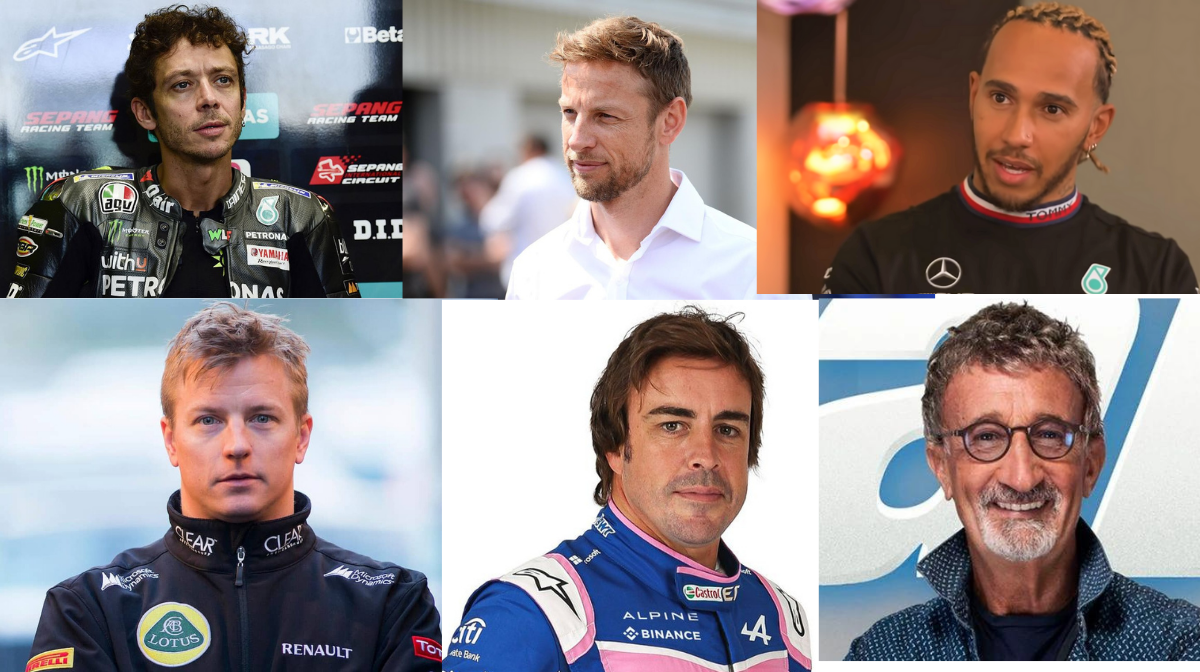 Below is the list of the 10 Richest Racing Drivers in the World 2023. Read through and let us know your thoughts in the comments section below.

He competed in Formula One between 1993 and 2002, and finished runner-up in the 1999 World Drivers’ Championship, driving for Scuderia Ferrari.

He began his career at the age of seventeen when he entered the Formula Ford Championship, achieving early success, before progressing to the Formula Three and Formula 3000 Championships.

Edmund Irvine net worth is $120 million making him one of the richest racing drivers in the world.

He is also the only road racer to have competed in 400 or more Grands Prix, and rode with the number 46 for his entire career. He had previously requested that the race number continues to be used in upcoming seasons, and not retired.

Valentino Rossi is the 9th wealthiest racing driver in the world with a net worth of $140 million.

Jenson Alexander Lyons Button MBE  is a British racing driver. He won the 2009 Formula One World Championship when he drove for the Brawn GP team. After his F1 career, he became champion of the 2018 season of the Super GT Series alongside Naoki Yamamoto, with whom he shared a Honda racing car at Team Kunimitsu.

Jenson Button net worth is estimated at $150 million

More on Top 10 Richest Racing Drivers in the World 2023

Kimi-Matias Räikkönen nicknamed “The Iceman”, is a Finnish racing driver who competed in Formula One between 2001 and 2021 for Sauber, McLaren, Ferrari, Lotus, and Alfa Romeo. Räikkönen won the 2007 Formula One World Championship driving for Scuderia Ferrari, their latest World Drivers’ Championship to date.

Räikkönen has won 21 Grands Prix, making him the most successful Finnish driver in terms of Formula One race wins, and is the only driver to win in the V10, V8 and the V6 turbo hybrid engine eras.

Kimi Raikkonen has a net worth of $150 making him the 7th richest racing drivers in the world.

He is regarded as one of the most influential drivers in NASCAR history, helping the sport reach mainstream popularity.

Fernando Alonso Díaz is a Spanish racing driver currently competing for Alpine in Formula One. He won the series’ World Drivers’ Championship in 2005 and 2006 with Renault, and has also driven for McLaren, Ferrari, and Minardi.

Born in Oviedo, Asturias to a working-class family, Alonso began kart racing at the age of three and achieved success in local, national, and world championships.

Fernando Alonso has a net worth of $$240 million making him the 5th richest racing drivers in the world.

Sir Lewis Carl Davidson Hamilton is a British racing driver. He currently competes in Formula One for Mercedes, having previously driven for McLaren from 2007 to 2012. In Formula One, Hamilton has won a joint-record seven World Drivers’ Championship titles (tied with Michael Schumacher), and holds the records for the most wins (103), pole positions (103), and podium finishes (183), among others.

Lewis Hamilton is one of the most successful racing drivers with a net worth of $285 million.

Don Schumacher idely known for being not only a former race car driver, but also a racing team owner – the owner of Don Schumacher Racing. He is also recognized as the owner, Chairman and CEO of Schumacher Electric Corporation, located in Chicago. He has been an active member of the sports industry since the early 1960s.

Schumacher is heralded as one of drag racing’s pioneers in the Funny Car class, and in March 2019, he was enshrined into the Motorsports Hall of Fame of America.

Don Schumacher has a net worth os $300 million currently.

He won the Irish Kart Championship in 1971 and moved to Formula Ford in 1974. He was the founder and owner of Jordan Grand Prix, a Formula One constructor which operated from 1991 to 2005.

Jordan was the chief analyst for Formula One coverage on the BBC from 2009 to 2015 before joining Channel 4 after BBC pulled out in 2016.

Since leaving Formula 1, Jordan has proven to be a very successful entrepreneur and investor.

Michael Schumacher is a German former racing driver who competed in Formula One for Jordan, Benetton, Ferrari, and Mercedes.

Schumacher has a joint-record seven World Drivers’ Championship titles (tied with Lewis Hamilton) and, at the time of his retirement from the sport in 2012, he held the records for the most wins (91), pole positions (68), and podium finishes (155)—which have since been broken by Hamilton—while he maintains the record for the most fastest laps (77), among others.

Michael Schumacher net worth is $800 million making him the richest racing driver in the world.

Summary of the top 10 Richest Racing drivers in the world

What do you think about the list of the 10 richest racing drivers in the world? leave your reply in the comments below;