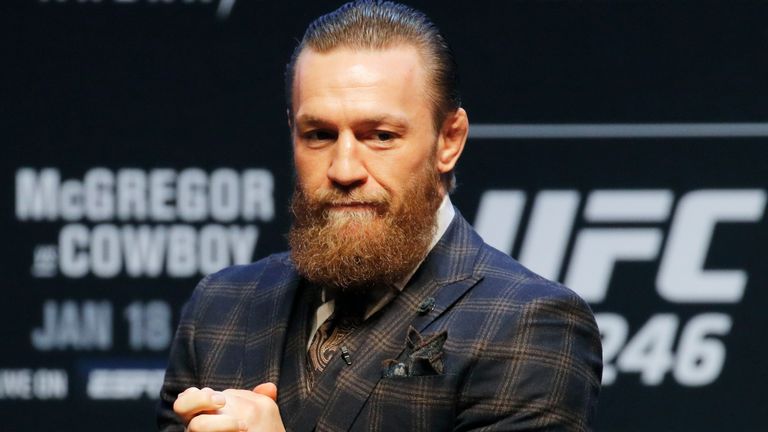 McGregor has entered the Octagon only three times since 2016, but continues to be the biggest star in the history of mixed martial arts. He banked more than $30 million for his first-round knockout of Donald “Cowboy” Cerrone in January 2020.

Conor Anthony McGregor was born in Crumlin, Dublin on 14 July 1988, the son of Tony and Margaret McGregor. He was raised in Crumlin, and attended Irish-language schools — the Gaelscoil Scoil Mológa, in Harold’s Cross,

In his youth, he played football for Lourdes Celtic Football Club. At the age of 12, he also began boxing at Crumlin Boxing Club, as a way to defend himself against bullies and raise his confidence.

In 2006, McGregor moved with his family to Lucan, Dublin, attending Gaelcholáiste Coláiste Cois Life. Following that, he commenced a plumbing apprenticeship. While in Lucan, he met future UFC fighter Tom Egan and they soon started training mixed martial arts (MMA) together.

McGregor made his mixed martial arts debut in an amateur fight against Kieran Campbell for the Irish Ring of Truth promotion in Dublin in 2007. He was only 18 years at the time.

He won via technical knockout (TKO) in the first round. Following the fight, he turned professional and was signed by the Irish Cage of Truth promotion. In 2008, McGregor began training at the Straight Blast Gym (SBG) in Dublin under John Kavanagh.

McGregor had his first professional MMA bout in 2008 as a lightweight, defeating Gary Morris with a second-round TKO. After McGregor won his second fight against Mo Taylor, he made his featherweight debut in a loss via kneebar against submission specialist Artemij Sitenkov.

After a victory at featherweight in his next bout against Stephen Bailey, McGregor contemplated a different career path before his mother contacted his coach John Kavanagh and reinvigorated him to continue pursuing mixed martial arts.

Richest Boxers in the world

Mixed Martial arts has been the major contributor to Conor McGregor net worth. According to information available to glusea.com, He one of the most decorated stars in MMA.

In February 2013, the Ultimate Fighting Championship (UFC) announced that they had signed McGregor to a multi-fight contract.

In joining, he became only the second fighter from Ireland to compete for the company, following team member Tom Egan.

On 6 April 2013, McGregor made his UFC debut against Marcus Brimage at UFC on Fuel TV: Mousasi vs. Latifi. He won the fight by knockout in round one. The win also earned McGregor his first “Knockout of the Night” award.

In 2015, at UFC 194, he defeated José Aldo for the UFC Featherweight Championship via knockout 13 seconds into the first round, which is the fastest victory in UFC title fight history.

On 14 June 2017, it was announced that McGregor would compete in his first professional boxing match against the undefeated Floyd Mayweather Jr., on 26 August 2017 at T-Mobile Arena in Paradise, Nevada. The bout was contested at super welterweight (154 pounds) with 8 oz. gloves. The fight was expected to be the richest in boxing history.

Now for the reason why you are reading this article. Conor McGregor net worth is $400 million. He is the highest-earning athlete according to Forbes earning about $180 million in 2021 surpassing football stars Christiano Ronaldo and Lionel Messi

also contributing to McGregor net worth are his numerous endorsement deals and business ventures. Glusea takes you through his other sources of income.

Just ahead of his fight with Mayweather, McGregor announced a fashion partnership with tailoring brand David August; the brand is named “August McGregor” and is aimed at providing modern men’s suits to millennials. August had met McGregor about three years earlier, via Dana White.

In September 2018, McGregor launched Proper No. Twelve Irish whiskeys in Ireland and the United States. The whiskey is named after the Crumlin neighborhood in Dublin 12, in which McGregor grew up.

In 2021, it was reported that McGregor and his business partners sold their majority stake in the company to Proximo Spirits, who previously had a 49% stake, for a deal worth a reported $600 million.

McGregor has two sisters named Erin and Aoife. He has been in a relationship with his fiancée, Dee Devlin, since 2008. They have three children, Conor Jr, Croía and Rían.

e is the biggest pay-per-view (PPV) draw in MMA history, having headlined five out of the six highest-selling UFC pay-per-view events.

His headline bout with Khabib Nurmagomedov at UFC 229 drew 2.4 million PPV buys, the most ever for an MMA event. His boxing match with Mayweather drew 4.3 million PPV buys in North America, the second-most in history.