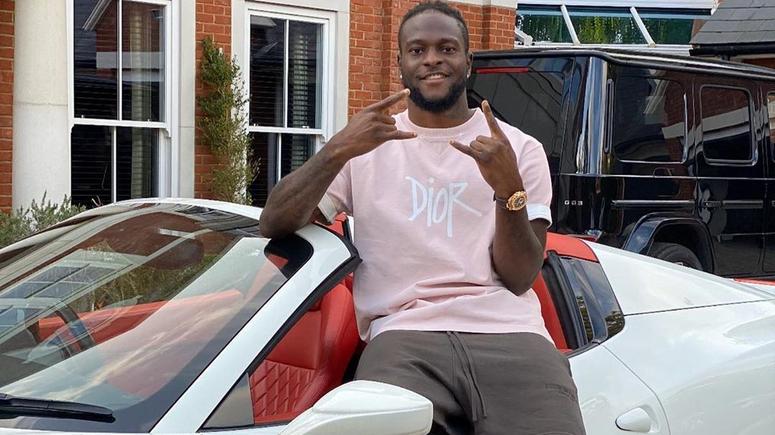 we bring to you the list of Victor Moses cars and houses.

Being one of the richest footballers in Nigeria, one would expect to see some luxurious cars sitting in Victor Moses Garage.

Keep reading as we unveil to you Victor Moses cars and houses list here.

Victor Moses is one of the best footballers from Africa, Nigeria to be precise, to maintain a low profile despite the level of wealth and fame he has attained.

He is a Nigerian winger who is currently playing for Spartak Moscow  in Russia. Moses previously played for the Nigerian national team where he won the African cup of nations with the Super Eagles.

Victor Moses has acquired so much wealth in the course of his career, enough to afford him the kind of luxury he desires. His fleet of exotic cars and houses are prove that the prolific winger has done well for himself. In this article, we will be taking a look at the various luxury cars owned by Victor Moses and the houses he lives in.

Victor Moses was born  in Lagos, Nigeria, on December 12,1990. He grew up without the love of his parents, as his beloved parents were murders during a religious riot in Kaduna which turned him into an orphan. It was his relatives that contributed and sent him to the UK to start life afresh.

Victor Moses began playing in the youth ranks of Crystal Palace in 2002. He progressed to the pint of being promoted to the first team, and soon made 58 appearances for the club before he was sold to Wigan Athletic in 2010.

Victor Moses was outstanding during his time at Wigan Athletic, so much so that his eye catching performances caught the attention of Chelsea who came for his signature in 2012.

After signing for Chelsea in 2012, Victor Moses became a regular started under Antonio Conte whose tactics and formation favored the Nigerian winger who was deployed as a right wing back.

After playing a total of 87 games for Chelsea, Victor Moses was loaned to several clubs including Liverpool, WestHam United, Stock city, Fenerbahçe and Inter Milan. He was later loaned to Spartak Moscow before the deal was made permanent in July 2021.

Though a very humble footballer, Victor Moses has eye for luxury lifestyle. He cruises around with some of his expensive cars and also reside in his mega million mansion. Some of these cars parked in the garage of Victor Moses are listed below.

First on the list of victor Moses cars is the Aston Martin with a price tag of $149,000

This is a classy and revolutionary automobile owned by Victor Moses. The exotic ride comes with amazing features just like other elite automobile designs such as Rolls-Royce.

The Aston Martin is capable of accelerating from 0-60 mph in 3.6 seconds, apart from its sedan look.

It also comes with a very powerful twin-turbocharged, 503 hp V-8 engine for smooth ride. Although Aston Martin stands out with its speed, it is also designed with amazing and state of the art features with a classy appearance.

The Ferrari 458 Italia with a starting price of $363,000 is another expensive ride among Victor Moses cars

When considering a ride that is known for its exceptional speed, the Ferrari 458 Italia is the car you should give a thumbs up to.

The Ferrari 458 Italia is one of the fastest and expensive automobile with state of the art features.

The comfort provided by the Ferrari 458 Italia is higher than in other models of Ferrari. The cockpit consist of racing seats with world class leather upholstery with a high-trimming quality.

Among Victor Moses cars list is the Ford Edge with a price tag of $32,000

The mid-size SUV is  designed with a very comfortable seating arrangements with turbocharged engines which gives it a high acceleration.

It is designed with superb safety ratings which makes you feel confident and secure. The fuel consumption is low.

The Ford SUV is a two-row SUV with five seats and a V8 turbocharged engine with 8-speed automatic transmission.

With so much earnings from his illustrious football career, you would not not be amazed to see a BMW among Victor Moses cars.

The BMW i8 is another luxury ride with stunning features especially considering the fact that it comes with a V6 engine and is capable of accelerating from 0-60 mph in 4.4 seconds.

The engine type of the BMW i8 is petrol with a combination of 227bhp and 129bhp electric motor along with an automatic 6 speed transmission system.

Victor Moses is a proud owner of a 6 bedroom state of the art mansion located in Lekki, Lagos State, Nigeria. The house is said to be valued at $600,000.

The mansion in itself is a joy to behold, as it contains a swimming pool, penthouse cinema with recent technological gadgets.

What do you think about the article on Victor Moses Cars and Houses? leave your reply in the comments below