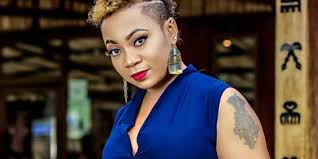 Vickoria Zukah better known as Vicky Zugah is a Ghanaian female actress, humanitarian and a businesswoman who hails from the Volta Region of Ghana.

She is most oftern in the news for controversial reasons. In this article we will be bringing to you the full profilr of the gorgeous Ghanaian actress.

Read More on The Richest Female Celebrities in Ghana

Vicky was born and brought up in the Volta region of Ghana. She is the third daughter of Mr. Komla Zugah and Miss Beatrice Patu

She is a   product of a broken home and she says it was her mother who initiated a divorce from the father because he was an abusive man.

Vicky’s acting career started when her friends told her she has the ability to act and that she has all features that qualifies her to become an actor, so she had an opportunity to feature in her first movie which she starred alongside Jackie Appiah and the late Suzzy Williams.

Her first movie Trokosi became her break through movie and she believe that she was lucky. She loves to learn from her peers and experienced actors in the industry in other to improve upon her skills to act good movies.

Zugah has starred in a number of movies. She is one of the best actresses in Ghana.

Movies starred by the actress includes;