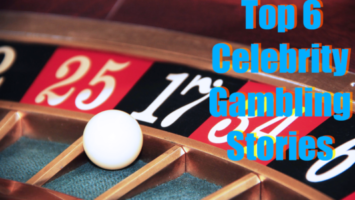 Places like Las Vegas and Atlantic City are notorious for gambling. Many people visit their casinos to try out their luck. Some get lucky enough to fly with millions, and some can return bankrupt.

Normally it depends on luck and sometimes on the skill of the person. There are such people who are experts in gambling. But whatever you do in gambling, it is still a dirty game.  If you love gambling be aware there are gambling problems.

But these are just people, what if I tell you that there are celebrities who are great gamblers as well? There are great stories of betting and successful gambling. They are famous in their respective industries, but they are also great gamblers. Most of them are too good at it that they were asked to leave the game by the casino management. You may even find your favorite celebrity on this list.

If you don’t know about them, then just keep reading. In this article, I am going to tell you about the gambling stories of six famous celebrities. These celebs are so involved in gambling addiction that they also play in online casinos. Without further ado, let’s share those betting stories.

The first name is a big name. Ben Affleck is a great actor – we love him as Batman. He is one of the best celebrity actors for me. When Batman rises at night, he hunts the villains and brings justice. And when Ben Affleck rises in Las Vegas, he brings down casinos.

Ben Affleck is a great poker player. He has also entered different poker tournaments. And due to his skills, he even won the California State Poker Championship. He was a master of this game, and the casinos did not like that. Even at some casinos, he was asked to play different games.

Back in 2014, he was playing at Hard Rock. He was winning the game easily. After a while, a security guy tapped on his shoulder and said that you are too good for this game. So, he had to back off with just 145,000 dollars.

However, it was not liked by dealers, pit-bosses, and cocktail waiters because Ben Affleck distributed all this money among them.

The gambling story of Ben Affleck also has a side effect. In one phase of his life, he was an addict to gambling. It was too bad that even his house was at stake. Some also say that his separation in 2015 was because of gambling. To get rid of this addiction, Ben Affleck had to take therapy lessons.

Tobey Maguire, the all-time favorite Spider-Man, is not just an amazing actor who has a long, complicated past. And now, we will share those complicated stories with you.

As he is also good at playing poker games. He was so involved in casino games that he won different poker championships. We can say that Batman and Spider-Man are heroes of two different universes, but they do meet at the common point of gambling.

Toby has won poker championships, but he has also been a part of an illegal syndicate. The syndicate was featured by famous celebrities just like himself. There is a rumor that says Affleck was also a part of this illegal gambling.

In this syndicate, luck and skill were in favor of spiderman, and he won big in this ring. Some say that he won up to 40 million dollars that night. But when one wins in gambling, the other loses. The losing person was a hedge fund manager from Los Angeles. He reported this incident to the police, and this illegal incident was caught.

So far, you have seen two Hollywood celebs in the world gambling. Let me take you to another world that is sports. Keep in mind that not all athletes are clean. Some of them have interesting stories.

Michael is one of the best swimmers America had. He has won 28 medals for his country, which makes him the most successful Olympian of all time. But why is he on our list?

Because just like other celebrities, he also has some other interests. He is almost an addict to poker and other online games. Back in the 2016 Olympics, he was spotted playing on his phone at the poolside.

But his addiction to poker is academic. He started to play poker in 2011 when he was accompanied by a professional poker player. And since then, he never left it. Surprisingly he does not have a story of any big amount won or lost does not matter. This is because he plays poker just for fun, he is not interested in winning big from it.

Just because of his different priorities, we don’t know that whether he went to gambling cities like Las Vegas or not.

Here is another athlete and another Michael, lol. He was a great basketball player, and now he is a good businessman. Moreover, he is also a great motivation if you want to become successful.

But this nice-looking guy has also been involved in the world of gambling. Jordan was a complete addict to gambling. He can play these games for as long as he wishes. During his peak times of basketball, he was used to playing till the wee hours of the day.

He even played when his team had gamed the next day. And this was not good for the team. The authorities investigated him, and the man retired soon after.

Thus, we can say that the dark world of gambling can end your bright careers.

If you follow tennis, then you must know about this guy. He has been one of the best tennis players since 2010. Rafal is the best tennis celebrity of the era. His new passion is casino gambling. He is even thinking about professionally starting playing poker once his tennis career ends. He also plans to play in the poker championship. And the best start can be the California state poker championship.

That’s his choice, but it will be better if he keeps it to the legal leagues.

If you like to laugh, then you should know about Drew Carey. He is a fine actor and an amazing comedian. Many of the young stars admire him as the ideal celebrity.

He also likes to play the games of luck. He may not be addicted to the game, but he can spend money on these games.

Drew can also play alone once he was caught playing blackjack for 500 dollars per hand.

It is obvious that when one loves gambling, they go to either Las Vegas or Atlantic City. Las Vegas casinos are the most famous throughout the world. You may say that Las Vegas is the hub of gambling.

Of course, these places are being overtaken by online casinos, especially because of the perks you can get from – such as a welcome bonus or 10 deposit casino. This makes us wonder what other celebrity gambling stories go on behind the scenes in online casinos.

Well, that was it from today’s stories of celebrities gambling. If you like to know more about poker games, you can share your thoughts with us. Or you can also tell us the missing celebrity on our list.