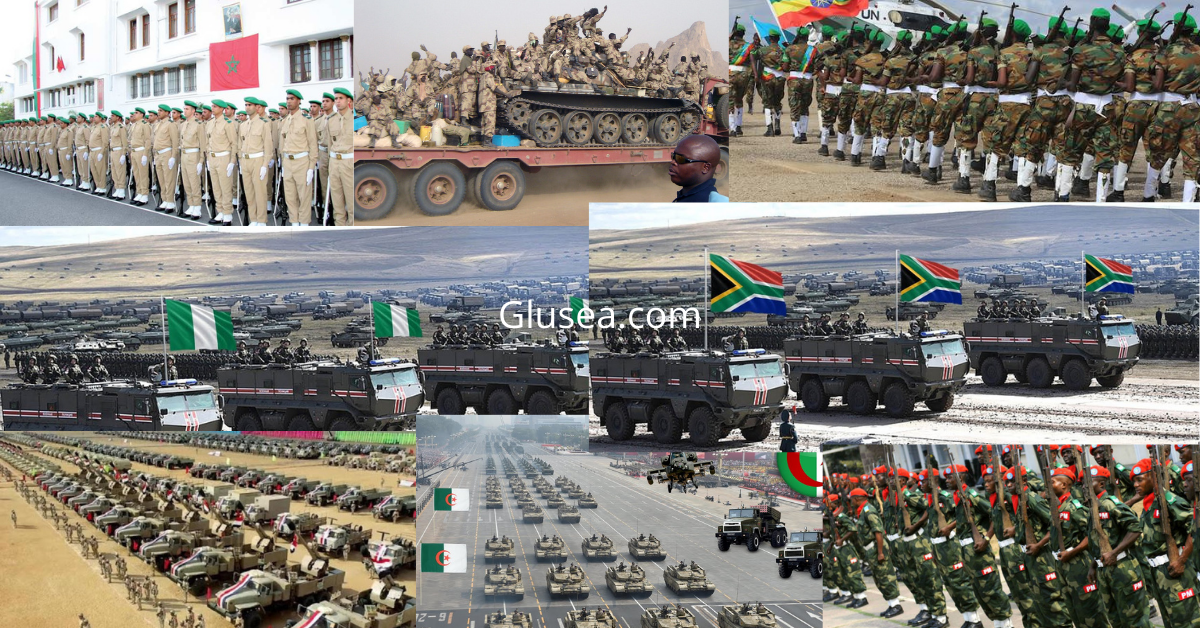 Which are the top 20 strongest militaries in Africa?

Read on to find out here.

African militaries have evolved, Countries such as Egypt are known to be one of the strongest militaries in Africa and the world. Due to political instability, and terrorist insurgency among others, Most countries in Africa now have some of the most empowered military bases.

Due to the instability in the country in 2011 civil war and the outbreak of a new conflict in 2014, the Libyan ground forces remain structurally divided, with components constituting the Tobruk-based Libyan National Army (LNA) under the command of Khalifa Haftar.

The forces loyal to the GNA have been fighting against various other factions in Libya, including the Islamic State. Some efforts have been made to create a truly national army, but most of the forces under the Tripoli government’s command consist of various militia groups, such as the Tripoli Protection Force, and local factions from cities like Misrata and Zintan.

Libya is among the countries with strongest militaries in Africa

Another strong military force in Africa can be found in Sudan. The military has an active force of 104,00 0 personnel, 191 aircraft, 410 combat tanks, 403 armoured fighting vehicles and a total of 18 naval assets. Most of this equipment is supplied from Russia and China as the country is under sanctions from Western countries.

During the Omar al-Bashir era, the Sudanese armed forces consisted of the Land Forces, the Sudanese Navy, the Sudanese Air Force, and the Popular Defence Forces. They also previously had Joint Integrated Units formed together with rebels of the Sudan People’s Liberation Army. The Armed Forces operated under the authority of the People’s Armed Forces Act 1986.

The majority of FARDC members are land forces, but it also has a small air force and an even smaller navy. The three services may have numbered between 144,000 and 159,000 personnel. In addition, there is a presidential force called the Republican Guard, but it and the Congolese National Police (PNC) are not part of the Armed Forces.

The Ethiopian National Defense Force (ENDF) is the military force of Ethiopia. Civil direction of the military is carried out through the Ministry of Defense, which oversees the ground forces, air force, as well as the Defense Industry Sector.

Ethopian forces are among the strongest militaries in Africa

The Royal Moroccan Armed Forces are large, expensive and well-trained with extensive experience in counter-insurgency, desert warfare and combined air-land operations. Further experience has come from participating in peace-keeping operations.

However, as Morocco has not fought a conventional interstate war since the Algerian-Moroccan war of 1963, they have little experience in state-on-state warfare.

The Angolan Armed Forces or FAA are the military of Angola. The FAA include the General Staff of the Armed Forces and three components: the Army, the Navy and the National Air Force.

The Nigerian Armed Forces are the armed forces of the Federal Republic of Nigeria. They are composed of: the Army, the Air Force and the Navy.

Nigeria has one of the strongest militaries in Africa

The South African National Defence Force (SANDF) comprises the armed forces of South Africa. The commander of the SANDF is appointed by the President of South Africa from one of the armed services. They are in turn accountable to the Minister of Defence and Military Veterans of the Defence Department.

The military as it exists today was created in 1994, following South Africa’s first multiracial election in April of that year and the adoption of a new constitution. It replaced the South African Defence Force and also integrated uMkhonto we Sizwe (MK) and the Azanian People’s Liberation Army (APLA) guerilla forces.

South Africa is 3rd of top 20 strongest militaries in Africa.

The Algerian People’s National Armed Forces is the military forces of the People’s Democratic Republic of Algeria. Algeria has a large military to counter foreign and domestic threats.

Algeria has the second strongest militaries in Africa.

Egypt has the strongest militaries in Africa.

figures and facts were sourced from GFP

Which country have strong soldiers in Africa?

Egypt is the answer in both cases. The state leads in the broader African continent with unfailing troops. This means that Egypt has the strongest army in Africa. The fact that Egypt has an estimated population of about 104,898,490 and over 920,000 army members confirms its defensiveness.

Who has the strongest military in Africa 2022?

Which military is powerful in Africa?

Egypt has the strongest military forces in Africa in 2022 thanks to its conventional fighting capacity. Egypt has a score of 0.187, the highest in Africa. Trailing behind Egypt in the list are South Africa and Algeria in second and third positions, with scores of 0.428 and 0.4724, respectively