HomeTop ListTop 15 Best Places to Visit Before You Die... 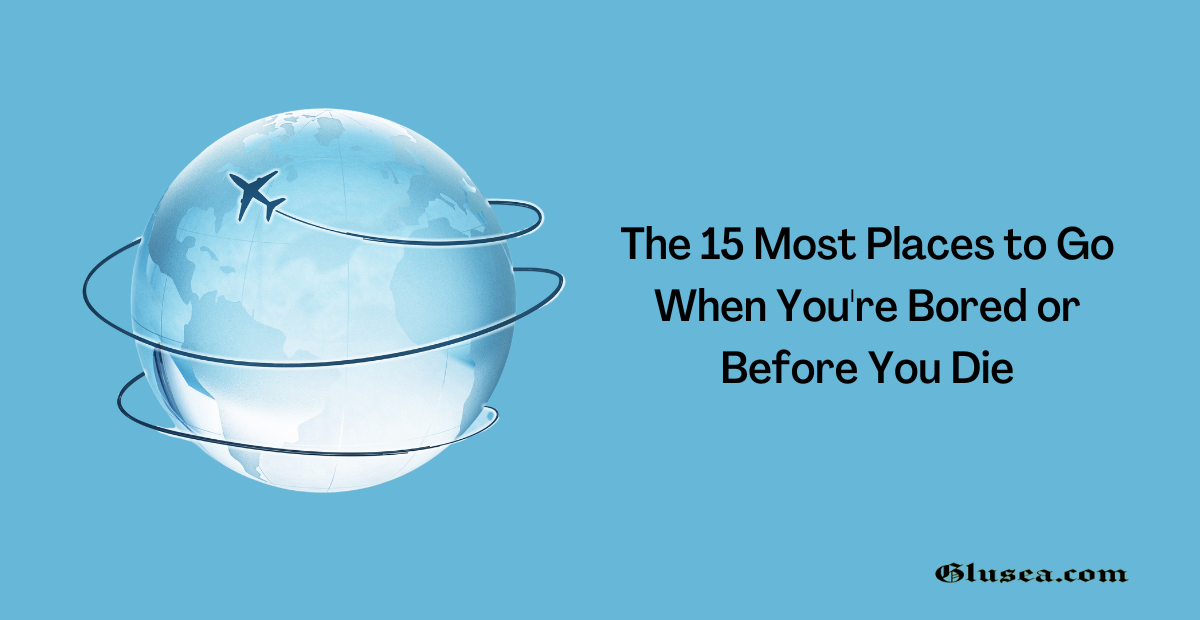 What are the Best Places to Visit Before You Die? Of course, it relies on who you ask, but some destinations keep popping up on everyone’s list. These 15 places represent the ultimate bucket list of must-see destinations, from iconic cities and ancient sites to majestic natural wonders and beautiful tropical islands. We don’t know about you, but we can’t wait to start planning our next vacation!

The Great Barrier Reef of Australia is one of the most diverse places in the world. There are over 2,900 individual reefs that stretch 1,400 miles long and can be found in some of the clearest water on Earth. Home to diverse ecosystems of corals and fish as well as WWII shipwrecks and underwater forests.

Belize’s Great Blue Hole is one of Earth’s most mysterious natural phenomena. This large submarine sinkhole near Ambergris Caye has a diameter that ranges from 300 meters. Some have estimated it to be as deep as 125 meters, although this is still unconfirmed. The Belizean government has prohibited scuba diving within the sinkhole and on the edge of its walls due to concern about unsafe levels of hydrogen sulfide in the water.

If you want a chance at seeing one of the world’s most amazing sites before it disappears beneath murky waters forever, now’s your chance! Grab your snorkel and goggles–you won’t regret it!. It is among the best places to visit

Empire State Building is a popular tourist destination in New York City. Located on Fifth Avenue and West 34th Street, the iconic skyscraper overlooks Times Square and Central Park. The tower opened its doors on May 1st 1931, becoming the world’s tallest building for over 40 years. Empire State features shops and restaurants and has a 360-degree view of the city from its 86th-floor observatory deck.

Stonehenge is an ancient monument built in England in the Neolithic and Bronze Ages on Salisbury Plain. It consists of a ring of large standing stones, with each stone around 13 feet tall, making them taller than a person. There are also some really cool people-sized stones. The purpose of Stonehenge is a mystery because there was no writing when it was built. Scientists think Stonehenge might have been used for solar observations and as an observatory for events like lunar eclipses and planting seasons, which could help farmers know when to plant crops.

Located in Paris, France, the Eiffel Tower is iconic and has been a world-renowned icon since its completion in 1889. At 324 meters tall, it’s the tallest building in Paris and is a symbolic touchstone for the city of lights. It’s also incredible for photographs!

So be sure to take one from the top when you get there. The highest level is three times as high as an average person can jump, so don’t forget your harness if you plan on exploring up there.

Related Posts: What Is An NFT? Non-Fungible Tokens Explained

The Pyramids of Giza

Giza’s Pyramids are one of the seven wonders of the ancient world. The Pyramid of Khufu (also known as the Great Pyramid) is the largest and most famous pyramid. It was built in 2560 BC by Pharaoh Khufu, who also built its smaller sister, The Pyramid of Khafre, nearby.

These pyramids are part of a group including several smaller pyramids and various tombs and temples built on an east-west axis on either side of a road connecting them.

India is viewed as one of the best places to visit before you die. It has over 400 outdoor air-conditioned shops and one of the most beautiful marble tombs surrounding it. The Taj Mahal is a pink sandstone mausoleum in Agra, Uttar Pradesh.

It took almost three decades for construction, from 1631-1648 and was built by orders of Mughal Emperor Shah Jahan as a commemoration for his favourite wife, Arjumand Banu Begum. She went by the name Mumtaz Mahal and had died while giving birth to their 14th child.

The site has been visited by twenty million people worldwide, making it India’s most visited tourist attraction outside Delhi.

There are many places to see before you die, and the most unique and possibly unusual is certainly on this list- the striped icebergs of Chilean Patagonia. A glacier splits from the front of a mountain range and causes waterfalls which in turn cause striped ice formations on one side due to the frequency of temperature changes. Something for your bucket list!

Mount Rushmore is a famous landmark on the south face of Mount Rushmore in the Black Hills of South Dakota. The sculpture depicts the heads of four American presidents: George Washington, Thomas Jefferson, Theodore Roosevelt and Abraham Lincoln. The monument is an emblem of the American people and a tribute to United States history and accomplishments. Plus, it’s one more place to see before you die!

Niagara Falls is the most famous waterfall in North America and one of the best places to see before you die.

You’ll be able to spot numerous rainbows when it cuts through the water, so always keep an eye out when you’re here. Niagara-on-the-Lake is comprehended for its ice wine, a traditional summer treat. The Niagara Falls Light Show is one of the most popular attractions in Niagara Falls.

The Canadian side is split into two sections: Horseshoe Falls is a breathtaking curtain of water that stands 50 feet high. At the same time, American Falls dangles dramatically over steep rock outcroppings and sets up a dramatic contrast against Horseshoe Falls with its 145-foot drop.

Reed Flute Caves are a beautiful place in China. They are located at the edge of the Qinling Mountains and date back 12000 years! This site is extraordinary and one of the best places to go when you’re bored or want to see what China offers.

The Reed Flute Cave tours make for an unforgettable experience where visitors can marvel at many stalactites and stalagmites that are unbelievably tall, decorated with marble-like crystals, and painted with diverse colours.

Goa is known for its fun and funky festivals, palm-lined beaches, offbeat restaurants and mouth watering cuisine. If you’re looking for a place to visit before you die in India, then make sure not to miss this destination.

Due to its exotic beach attractions and tropical charm, Goa is a popular travel destination for backpackers from around the globe. There is no other vacation destination in India where you can enjoy beautiful beaches, delicious seafood, a lush green backwater and cheap booze like Goa.

The beauty of the Plitvice Lakes National Park lies in its variety of lakes, waterfalls and strange rock formations.

The oldest National Park in Croatia. It is also one of the infrequent places in Europe with an untouched forest primaeval. Plitvice Lakes National Park is famous for its 16 stunning lakes surrounded by lush greenery and dense forests.

If you are looking to travel within China, it is difficult to find an area that is as exotic and rugged as Xi’an is. It is the home of 11 dynasties which were the rulers of China. The city of Xi’an is still a place that historians find fascinating.

The city has kept its old walls intact. Walking around the walls can provide stunning views of the town and often is awe-inspiring as Guangren Temple is right in front of you.

The Capilano Suspension Bridge is a bridge in Canada that spans the Capilano River. It is located in North Vancouver, British Columbia.

It was originally built as an attraction for the then-new tourist destination of Capilano Canyon. The bridge spans 70 meters above the river and has a length of 140 meters.

There is consistently a new place to explore and a new experience waiting for you. The 15 places to go before you die are a mix of natural and 5man-made wonders. They are amazing in their own right, and they all have something unique that makes them worth visiting. The conclusion of this article should be that many places in the world are worth visiting, and it is never too late to explore them.

Previous article
Top 15 World’s Best Beach Vacations for Couples
Next article
Who is Guy Laliberte? Net Worth, Biography and Business