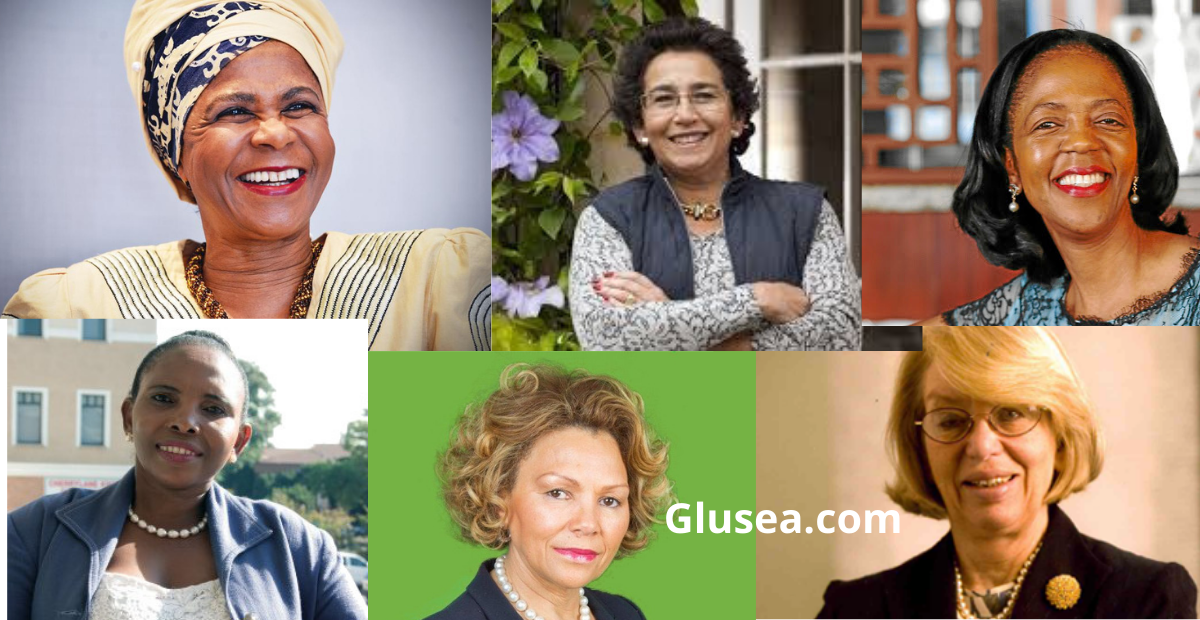 Glusea brings to you the list of the Top 10 Richest women in South Africa 2022. Read about their net worth, source of wealth and their profiles here.

List of the Top 10 Richest Women in South Africa

Wendy Appelbaum is the richest woman in South Africa and one of the richest in Africa. She is the Chairperson of DeMorgenzon Wine Estate, wine and agricultural business in Stellenbosch, South Africa.  Together with husband, Hylton Appelbaum, purchased DeMorgenzon, a wine estate in Stellenbosch. Has donated US$23 million (R150 million) to create the Gordon Institute of Business Science (Gibs), and the Donald Gordon Medical Center. Wendy chairs the South African Women’s Professional Golfers’ Association.

Along with her husband, Raymond, she controls the Ackerman Family Trust which owns close to 50% of Pick ‘n’ Pay, one of South-Africa’s largest retail outlets.  The US$3 billion (market cap) company has operations in Namibia, Mozambique, Namibia, Zambia, Zimbabwe and Australia. Wendy serves as an executive director of the group. Arts connoisseur is a trustee of the Cape Town Opera Trust.

Charnley first made her mark on the African business community as a negotiator for South Africa’s National Union of Mineworkers where she spent 13 years co-ordinating various divisions of union operations. She went on to become an executive director for the MTN Group, which is Africa’s largest telecommunications company.

Under her leadership several African and Middle Eastern countries (including Nigeria and Iran) were connected into the MTN network. Charnley was the behind the founding of the National Empowerment Consortium made up of 50% black business owners and 50% black African laborers. They eventually owned 35% of Johnnic Holdings (now called Johnnic Communications).

The elder sister to South African billionaire Patrice Motsepe, Bridgette Radebe started out as a contract miner in the 80s, managing shafts and procuring for the larger mining houses. Went on to found Mmakau mining, an immensely successful mining firm with assets in platinum, gold, uranium, coal, chrome, exploration and mining interests. Also serves as president of the South African Mining Development Association. Married to South Africa’s Justice Minister, Jeff Radebe. She is among the richest women in South Africa

One of the largest individual shareholders in Octodec Investments and Premium Properties, both property loan stock companies listed on the Johannesburg Stock Exchange. Her father, Alec Wapnick, founded both companies. She serves as a non-executive director at Octodec, and is a partner at TWB Attorneys, a successful commercial law firm in Johannesburg.

Elisabeth Bradley’s father Albert Wessels brought Toyota (TM) to South Africa in 1961. In 2008, Wesco Investments, a South African holding company which she controls, sold off its 25% stake in Toyota South-Africa to Toyota Motor Corp. in Japan for US$320 million (R2.1 billion). She walked away with at least US$150 million (R1 billion). Bradley has served on the boards of blue chip companies such as Standard Bank Group, Hilton Hotel and Roseback Inn.

Judy is a businesswoman and author who is the Chancellor of the University of the Witwatersrand and the founding chairman of Mbekani Group. She served as chairperson of the board of Aspen Pharmacare Holdings from November 2007 until December 2015 while concurrently serving as non-executive director from July 2005 until December 2015. In 2020 the magazine Forbes called her one of Africa’s 50 most powerful women.

Nonhlanhla Mjoli-Mncube is the Founder of Women for Housing and the Rural Housing Loan Fund and serves as its Chairwoman.

Mjoli-Mncube serves as the Economic Adviser to the Deputy President, South Africa focusing on ASGISA. She is an acknowledged Leader in the field of housing finance, construction, development and gender rights. She started her career as Research and Development Manager at Standard Bank’s Small Business Division in 1991.

The one-time managing director of the World Bank Group now heads Circle Capital Ventures, a leading Black Economic Empowerment (BEE) Private Equity firm. The medical doctor and former anti-apartheid activist is also one of Africa’s most prominent board room gurus. Directorships include Anglo-American, Remgro and Mediclinic. Also serves on the Board of Trustees for the Rockefeller Foundation, the Mo Ibrahim Foundation and the Alliance for a Green Revolution in Africa.

Figures used in compiling the list was sourced from Briefly.co.za and Buzzsouthafrica.com

Jeff Bezos to Step Down as Amazon CEO