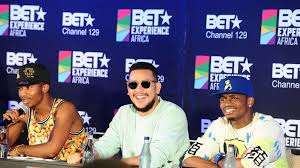 AKA, is a South African rapper, singer, songwriter, record producer, and entrepreneur. He is one of the prominent rappers on the African continent. AKA net worth is estimated at $12 million and he is one of the top 10 richest rappers in South Africa.

AKA whose real name is Kiernan Jarryd Forbes gained significance after releasing his single “Victory Lap” which was released from his debut album, Altar Ego (2011).

Forbes continued his success by releasing studio albums which include Levels (2014), Touch My Blood (2018), and the collaborative album, Be Careful What You Wish For alongside Anatii (2017).

In April 2020 Forbes alongside vodka brand Cruz launched the watermelon-flavored drink with his initial on the bottles. That same month, Forbes was featured as a special guest on WWELive events which were held in Johannesburg and Cape Town. As for 2019, he was the roastee for the Comedy Central Roast special.

In the album, multiple tracks are sampled from, or are exact copies of songs on Good Morning South Africa, such as the “Rap Rave Megamix” (where the first glimpses of Jones’s Ninja character were seen) were later reformed into the “Zef Side” video, featuring a few verses from “Beat Boy”.

Ninja told Rolling Stone, “Everything I did before Die Antwoord was me experimenting, messing around and trying to find Die Antwoord . . . everything before it was disposable. It was all throwaway.”

Cassper Nyovest, is a South African rapper, songwriter, entrepreneur, and record producer. He is one of the most successful artists in South Africa.

Nyovest garnered several endorsements deals with various companies, notably with vodka brand, Ciroc which is one of the biggest endorsement deal in his career so far.

In 2015, Nyovest endorsed with MTN and AG Mobile in launching a smartphone named, AG Hashtag which was inspired and partly designed by him. He also endorsed with other brands including, Shoprite, SamsungSouth Africa, Coca-Cola, KFCSA, Castle Lite and NikeSA

Currently, Nyovest net worth is $8 million making him one of the richest rappers in South Africa.

He is currently signed to  Def Jam Records. Nasty C net worth is estimated at $2 million making him of the most prolific young artists in the African continent as a whole.

Apart from being one of the best rappers in South Africa and indeed, Africa as a whole, Nasyu is also among the wealthiest rappers list.

Nasty, whose birth-given name is Nsikayesizwe David Junior Ngcobo began his career in 2013. After releasing three mixtapes , one being “Undisputed” and two EP, Ngcobo released his debut album Bad Hair (2016), and Strings and Bling (2018) which was associated and supported by his first tour, The Ivyson Tour.

with a net worth of $6 million Nasty has established himself as one of the most sort after rappers in South Africa.

He has shared a stage with US rapper Drake, as an opening act.

Tabure Thabo Bogopa Junior who performs under the stage name JR, is a  rapper. He performs Motswako rap, in both Setswana and English. He had two number 1 hip hop songs as well as two no.1 pop songs on the South African Charts

He achieved early success with his band, Jozi, and is most known for his solo single, “Heaven”, which was released in 2013, and features fellow South African hip hop recording artists, AKA, and Maggz.

Check out the Best DJs in Africa here