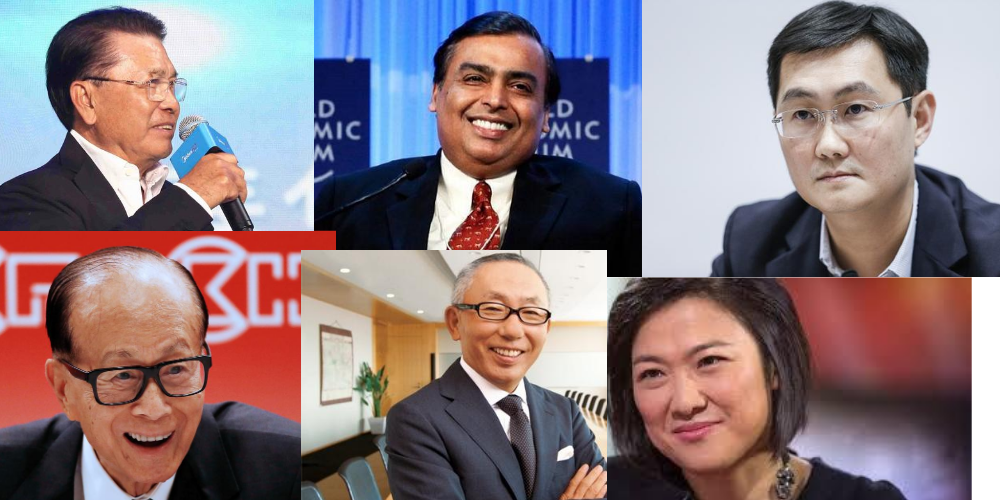 We bring to you the list of top 10 richest people in Asia.

China has the highest number of billionaires in Asia even though the richest man in Asia is from India.

Qin Yinglin, chairman of China’s Muyuan Foodstuff, made his fortune as the country’s largest pig breeder in the world’s biggest pork market.

Qin was born in Neixiang County in Henan, China’s most populous province.

He studied animal husbandry at Henan Agricultural University then started his own business with wife Qian Ying, who sits on the board of Muyuan.

The couple started their venture with 22 pigs in 1992.

Tadashi Yanai  is a Japanese billionaire businessman, the founder and president of Fast Retailing, the parent company of Uniqlo. As of May 2020, he was ranked 41st richest in the world by Forbes, and the richest in Japan, with an estimated net worth of US$24.3 billion.

Yang Huiyan  is a Chinese billionaire businesswoman. She is a property developer and the majority shareholder of Country Garden Holdings, a stake largely transferred to her by her father Yang Guoqiang in 2007.

She is the richest woman in Asia with a net worth of $27.9 billion

He Xiangjian is the co-founder of Midea, one of China’s largest appliance makers.

Midea Group, whose shares trade on the Shenzhen Stock Exchange, now has more than 200 subsidiaries, including Germany-based robotics firm Kuka.

He Xiangjian is one of the richest people in Asia with a net worth of $31 billion.

Li was one of the most influential entrepreneurs in Asia, presiding over a business empire with a diverse portfolio of businesses from a wide array of industries, including transportation, real estate, financial services, retail, and energy and utilities.

His conglomerate company Cheung Kong Holdings was influential in many sectors of the Hong Kong economy and made up 4% of the aggregate market capitalisation of the Hong Kong Stock Exchange.

In spite of his wealth, Li cultivated a reputation for leading a frugal no-frills lifestyle, and was known to wear simple black dress shoes and an inexpensive Seiko wristwatch.

He lived in the same house for decades, in what has now become one of the most expensive districts in Hong Kong, Deep Water Bay in Hong Kong Island.

Li is also regarded as one of Asia’s most generous philanthropists, donating billions of dollars to charity and other various philanthropic causes, and owning the second largest private foundation in the world after Bill & Melinda Gates Foundation.

In 2019, aged 91, Lee stepped down as chairman and managing director of the company, in favour of two of his sons, Peter and Martin Lee. He retains a role as an executive director.

Hui is the largest shareholder of China Evergrande Group. It has more than 700 projects in more than 240 cities in China including Beijing, Shanghai, Guangzhou and Shenzhen

As of 2021, Xu has an estimated net worth of $35 billion, making him the third-richest person in China, and 31st -wealthiest in the world, according to Forbes.

Jack Ma, or Ma Yun is a Chinese business magnate, investor and philanthropist. He is the co-founder and former executive chairman of Alibaba Group, a multinational technology conglomerate.

As of 2021, Ma is the second-wealthiest person in China, with a net worth of $48.8 billion, as well as one of the wealthiest people in the world, ranked 20th by Forbes.

Ma Huateng  is a Chinese business magnate, investor, politician, and member of the Chinese Communist Party.

He is the founder, chairman and chief executive officer of Tencent, Asia’s most valuable company, one of the largest Internet and technology companies, and the biggest investment, gaming and entertainment conglomerates in the world.

He is currently the richest man in Asia with a net worth of US$81.6 billion and as of 2020 he is listed on Forbes as the 5th richest person in the world.