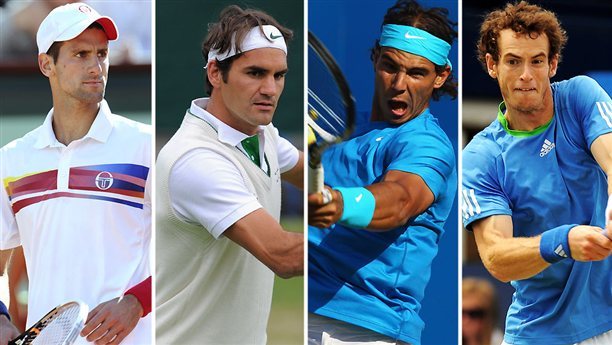 Best Tennis players in the world

Novak Djokovic is a Serbian professional tennis player. He is currently ranked as world No. 1 by the Association of Tennis Professionals (ATP).

Djokovic has been No. 1 for a record total of 326 weeks, and has finished as year-end No. 1 on an Open Era joint record six occasions shared with Pete Sampras.

Novak is the only player to win all of the “Big Titles” on the modern ATP Tour – that is, all four Grand Slam tournaments, all nine ATP Masters events, and the ATP Finals.

Daniil Sergeyevich Medvedev is a Russian professional tennis player. He is currently ranked by the Association of Tennis Professionals (ATP) as world No. 2, which is his career-high singles ranking first achieved on 15 March 2021.

Medvedev became the first and only player to defeat the top 3 ranked players in the world en route to the title.

Rafael “Rafa” Nadal Parera is a Spanish professional tennis player. He is ranked world No. 3 by the Association of Tennis Professionals (ATP), has been ranked No. 1 in the ATP rankings for 209 weeks, and has finished as the year-end No. 1 five times.

His 13 French Open titles in particular are a record at any tournament. Nadal’s dominance on clay is also highlighted by 62 of his 88 ATP singles titles coming on the surface, including 26 of his 36 ATP Masters titles, and his 81 consecutive wins on clay is the longest single-surface win streak in the Open Era.

Stefanos Tsitsipas is a Greek professional tennis player. He is the youngest player ranked in the top 10 by the Association of Tennis Professionals (ATP) and has a career-high ranking of No. 4 in the world, making him the highest-ranked Greek player in history.

Tsitsipas was the champion at the 2019 ATP Finals, becoming the youngest winner of the year-end championships in eighteen years. He has won seven ATP singles titles.

Tsitsipas won his first match on the ATP Tour in late 2017 and quickly ascended up the ATP rankings the following year.

Dominic Thiem is an Austrian professional tennis player. He is the second-highest ranked Austrian player in history.

He has won 17 ATP Tour singles titles, including one Grand Slam title at the 2020 US Open where he came back from two sets down to defeat Alexander Zverev in the final. With the win, Thiem became the first male player born in the 1990s to claim a Grand Slam singles title, as well as the first Austrian to win a US Open singles title.

Thiem was also runner-up at the 2019 and 2020 ATP Finals, where he lost to Stefanos Tsitsipas and Daniil Medvedev respectively.

Alexander “Sascha” AlexandrovichZverev is a German professional tennis player. Zverev was the champion at the 2018 ATP Finals, making him the youngest winner at the year-end championship in a decade. He is the only active player outside of the Big Four with four ATP Masters 1000 titles.

Zverev has won 15 ATP titles in singles and two in doubles. He reached his first final of a major at the 2020 US Open, finishing runner-up to Dominic Thiem.

Andrey Andreyevich Rublev is a Russian professional tennis player. He reached a career-high singles ranking of No. 7 by the ATP on 19 April 2021. Rublev broke into the top 10 of the ATP Tour in October 2020. He has won eight ATP singles titles.

He has also a career-high doubles ranking of No. 74, achieved on 6 January 2020. He has won two doubles titles.

Roger Federer is a Swiss professional tennis player. He is ranked No. 8 in the world by the Association of Tennis Professionals (ATP).

He has won 20 Grand Slam men’s singles titles, an all-time record shared with Rafael Nadal. Federer has been world No. 1 in the ATP rankings a total of 310 weeks – including a record 237 consecutive weeks – and has finished as the year-end No. 1 five times.

Read Richet Boxers in the world

Federer has won 103 ATP singles titles, the second-most of all-time behind Jimmy Connors and including a record six ATP Finals.

Roberto Bautista Agut is a Spanish professional tennis player. He has been ranked as high as world No. 9. Bautista Agut has won nine ATP singles titles out of eighteen finals, the biggest win being the 2018 Dubai Tennis Championships, an ATP 500 tournament. His biggest final has been the 2016 Shanghai Masters, where he lost to Andy Murray. His best result at a major has been at the 2019 Wimbledon Championships, where he reached the semifinals.

Summary of Top 10 Best Tennis Players in the World (Men)