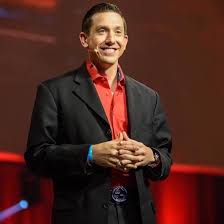 In order to determine the ‘all-encompassing’ secret to success word… let’s go back in time a little bit.

A young waitress sponsored me (The only reason I signed up was because I thought I had a chance with her…) and handed me my first personal development book.

It was “Think & Grow Rich” by Napoleon Hill.

At the beginning of the book, it said something like, “within’ this book lies the secret to success.”.

Side note – If you haven’t read Think & Grow Rich… Go get it! Napoleon Hill went out and interviewed basically 400 of the wealthiest people, top influencers, and top thought leaders.

I was really excited to dive into this goldmine of wisdom and discover the secret to success!

Mainly it was because it had “rich” in the title and I wanted to be rich!

I’ve been in school my whole life and not once did somebody teach me the secret to success.

So, I read the entire book front-to-back and guess what…

I must have missed where it told me the secret!

So, I read the entire book a second time…

Specifically searching for the word “Secret”… and it never showed up!

I thought to myself, “maybe he’s lying!”.

Finally, I decided to read it a third time.

This time I read it with the intention of figuring out for myself what the secret was.

I searched diligently for what the common denominator of all these successful leaders was.

Most everybody went through some type of adversity & was met with many challenges before achieving success.

I determined that, that ONE word had to be the secret!

If I can have this one thing, as all these other leaders have had, I could have success!

It wasn’t intelligence, it wasn’t a born quality, and it wasn’t anything external.

The one word is determination.

Simply having the will to continue going until you win.

I didn’t grow up wealthy…

Never did well in school…

…but when I read the book that third time I said, “If the secret to success is determination… If I’m willing to have pig-headed determination and if I’ll just keep going until I win… I’ll just win!”.

Realize – If you have more determination than anyone else, you will have massive success because in reality in life (and business) is that most people quit before the prize.

Most people lack determination and that’s why they fail

That’s why they live an average life.

It’s why they finish their life looking back, filled with regret because they just simply didn’t have enough determination.

Now, they won’t blame it on not having determination…

They’ll blame it on life not being fair…

Not having the right resources…

Or not being smart enough…

…but in reality, the only reason why you fail is that you don’t have enough determination.

They were way better speakers than me…

Better salespeople than me…

They had way more credibility…

And much older than me.

Guess what happened when the company went out of business?

They went back to the corporate world.

They didn’t have the secret to success!

Today most of them are living about the same life that they were years ago.

I, however, had the determination that I am going to win in life.

“I’ll get rich and become a millionaire.”.

And so I just continued.

I look at over the last nine years in my company, I mean I was just looking this morning and I’m looking at my weekly income…

Even though the challenges came up – my income is up four to six times.

Other people are going to quit.

So my friends if you want to lock in one character trait in yourself that’s going to cause you to win even when you don’t feel like you have any advantages – lock-in determination.

Say it to yourself over and over again.

Do whatever it takes, no matter how much you have to struggle…

You’ve got to have the determination and the will to win.

You will win if you have the attitude and belief.

Qualities of Creative Thinkers You Must Know

Creating a Mindset That Will Help You Succeed