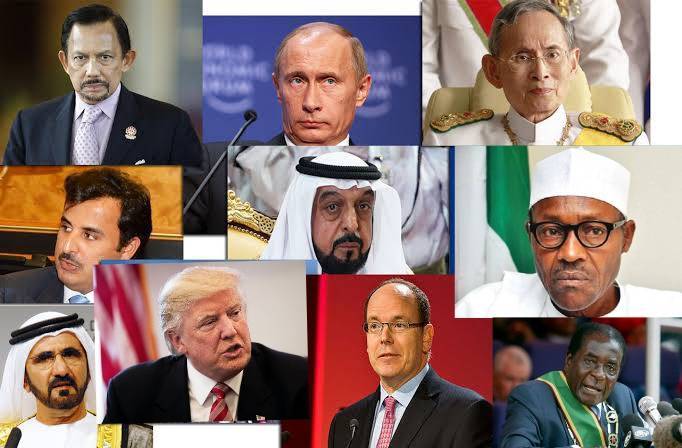 Glusea brings to you the richest president in the world 2021

Hassanal Bolkiah is the 29th and current Sultan and Yang di-Pertuan of Brunei, as well as the Prime Minister of Brunei, making him one of the last absolute monarchs. The eldest son of Sultan Omar Ali Saifuddien III and Raja Isteri (Queen) Pengiran Anak Damit, he succeeded to the throne as the Sultan of Brunei, following the abdication of his father on 5 October 1967.

The sultan has been ranked among the wealthiest individuals in the world. The sultan once owned one of the largest private car collections in the world with about 2,500 cars.

Sheikh Khalifa is also chairman of Abu Dhabi Investment Authority, which manages $875 billion in assets, the largest amount managed by a nation’s head of state in the world. Collectively, the Al Nahyan family is believed to hold a fortune of $150 billion.

In January 2014, Khalifa suffered a stroke but was in a stable condition. He has since assumed a lower profile in state affairs, but retained presidential powers.

His half brother Sheikh Mohammed bin Zayed Al Nahyan now carries out public affairs of the state and day-to-day decision-making of the Emirate of Abu Dhabi.

Mohammed VI of Morocco is the King of Morocco. He is a member of the Alaouite dynasty and ascended to the throne on 23 July 1999 upon the death of his father, King Hassan II. he is the richest president in Africa

He initiated political and economic changes and an investigation into human rights abuses during his father’s rule.

The king says the fight against poverty is a priority, earning him the name “guardian of the poor”. Economic liberalisation has attracted foreign investment and officials point to better basic services in shanty towns and rural areas. But some non-government groups say little has changed, with poverty still widespread and unemployment remaining high.

A key reform has been the Mudawana, a law which grants more rights to women. The king has said it is in line with Koranic principles, but religious conservatives have opposed it.

He is the grandson of Kim Il-sung, who was the founder and first supreme leader of North Korea from its establishment in 1948 until his death in 1994.

Kim rules a dictatorship where elections are not free and fair, government critics are persecuted, media is controlled by the regime, internet access is limited by the regime, and there is no freedom of religion

Mohammed bin Rashid Al Maktoum  is the Vice President and Prime Minister of the United Arab Emirates (UAE), and ruler of the Emirate of Dubai. Since his accession in 2006, after the death of his brother Sheikh Maktoum, he has undertaken reforms in the UAE’s government, starting with the UAE Federal Government Strategy in April 2007.

He is responsible for the growth of Dubai into a global city, as well as the launch of a number of major enterprises including Emirates Airline, DP World, and the Jumeirah Group.

Many of these are held by Dubai Holding, a company with multi-diversified businesses and investments.

Sheikh Mohammed has overseen the development of numerous projects in Dubai including the creation of a technology park and a free economic zone, Dubai Internet City, Dubai Media City, the Dubai International Finance Centre, the Palm Islands and the Burj Al Arab hotel. He also drove the construction of Burj Khalifa, the tallest building in the world.

Hans-Adam owns LGT banking group and has a family fortune of $US7.6 billion and a personal fortune of about $US4 billion, making him one of the world’s richest heads of state, and Europe’s wealthiest monarch. He owns an extensive art collection, much of which is displayed for the public at the Liechtenstein Museum in Vienna.

Hamad bin Khalifa Al Thani  is a member of the ruling Al Thani Qatari royal family. He was the ruling Emir of Qatar from 1995 to 2013. The Qatari government now refers to him as His Highness the Father Emir.

Hamad seized power in a bloodless palace coup d’état in 1995. During his 18-year rule, Qatar’s natural gas production reached 77 million tonnes, making Qatar the richest country in the world per capita with the average income in the country US$86,440 a year per person.

During his reign, several sports and diplomatic events took place in Qatar, including the 2006 Asian Games, 2012 UN Climate Change Conference, Doha Agreement, Fatah–Hamas Doha Agreement, and it was decided that the 2022 FIFA World Cup will be held in the country.

He established the Qatar Investment Authority; by 2013, it had invested over $100 billion around the world, most prominently in The Shard, Barclays Bank, Heathrow Airport, Harrods, Paris Saint-Germain F.C., Volkswagen, Siemens and Royal Dutch Shell