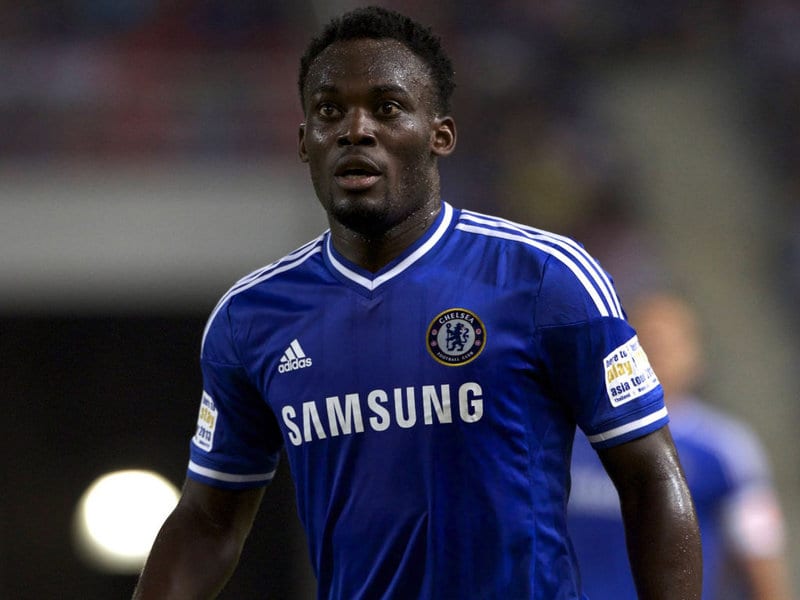 Top 10 Richest Footballers in Ghana 2021: Ghana has produced a lot of talents in the game of soccer.  A lot of them ply their trade in the most prestigious clubs in the world.  As you are aware, the game of football is the most-watched game in the world. Michael Kojo Essien is the richest footballer in Ghana. Find out how much he makes and the list of top 10 richest footballers in Ghana all in this article. Keep reading.

Essien started his international football career by signing for Bastia after breaking through at the 1999 u-17 world cup in New Zealand. He rose further to play for bigger clubs in Europe including Lyon, Chelsea, Real Madrid, inter Milan, and so on..

Michael has a fleet of properties to his name. He owns a house in London which he purchased for  $1.5 million. He also owns houses in Ghana as well.

Michale Essien net worth is $45 million making him the richest footballer in Ghana.

Asamoah Gyan is not just a footballer, he is also a successful businessman and a musician as well. He is the all-time top scorer in the Ghanaian national team with 51. He has participated in 7 African tournaments and 3 world cups for Ghana.

Asamoah Gyan owns about eleven different companies including; Filtered water company, beverage company, airline company, real estate company among others. You can find out more about Asamoah companies. He has won 5 individual awards in the continent including the prestigious BBC African footballer of the year.

Dede Ayew is the current captain of the Black Stars. It is obvious to see the young prolific player in the list of the richest footballer in Ghana. Ayew began his career in Ghana, playing for Nania, while debuting for the club at age 14. He is well known for his role in Under 17 world Championship in Egypt which he captained the team to lift the trophy in 2009. 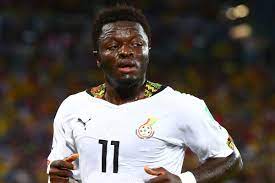 They pimp expensive cars for top stars like footballers, designers, musicians,s, and millionaires

A full international for Ghana since 2002, he has earned over 80 caps for the national team and has been selected for  Africa Cup of Nations tournaments and three FIFA World Cups. Muntari married Ghanaian businesswoman Menaye Donkor.

Sulley Muntari is among the top 10 richest footballers in Ghana with a net worth of $25.5 million

Jeffrey Schlupp is a professional footballer who plays for Premier League club Crystal Palace and the Ghana national team as a left-back or winger. He started his career as a striker. Schlupp is one of the richest footballers in Ghana. The star makes £2,912,000 a year at Crystal Palace

Jeffrey Schlupp net worth is $22 million making him one of the top 10n richest footballers in Ghana. 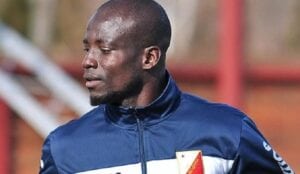 Stephen Leroy Appiah is a Ghanaian former professional footballer who played as a midfielder. Appiah was a member of the Ghana national team, which he has represented at the youth, Olympic, and senior levels. He captained Ghana at their World Cup debut in 2006 and at the 2010 World Cup.

with a net worth of $20 million, Stephen Appiah is among the top 10 richest footballers in Ghana 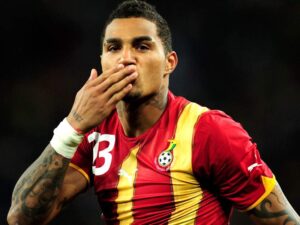 Kevin-Prince Boateng is a Ghanaian professional football player with an estimated net worth of $20 million.

Kevin-Prince Boateng started his career when he was six years old for Reinickendorfer Fuchse. In 1994, he played for Hertha BSC II  and Hertha BSC which lasted until 1997. During his stint for Hertha, he received the Fritz Walter Gold Medal in the Under-18 and Under-19 category.

He signed a four-year contract with the Tottenham Hotspur in 2007 but was loaned to Borussia Dortmund during the remainder of the season. During his stay with Dortmund, Boateng appeared in ten Bundesliga matches.

He moved to Portsmouth in 2009 and finished the season with 3 goals in 22 Premier League games. Boateng also played for Genoa, Milan, and Schalke04.

Mubarak Wakaso  is a Ghanaian footballer who plays for Chinese club Jiangsu Suning F.C. and the Ghana national team as a midfielder.

He spent the better part of his career in Spain, starting out at Elche in 2008 and going on to also represent Villarreal, Espanyol, Las Palmas, Granada and Alavés. He also competed professionally in Russia, Scotland, Greece and China.

Wakaso appeared with the Ghana national team at the 2014 World Cup, as well as four Africa Cup of Nations tournaments. 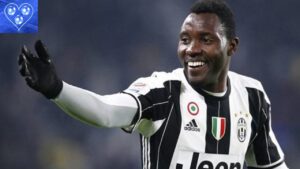 Kwadwo began his professional career with Italian club Udinese in 2008; his consistent performances earned him a transfer to Juventus in 2012, where, with his energy, versatility, and technical skills, he played a key role in helping the club to six consecutive Serie A titles between 2013 and 2018, among other titles, although his appearances at the club were limited by injuries during his later seasons.

He joined Inter in 2018. At the international level, he has represented Ghana in four Africa Cup of Nations tournaments, and two FIFA World Cups.

Kwadwo Asamoah is among the top 10 richest footballers in Ghana

Jordan Pierre Ayew is a Ghanaian professional footballer who plays as a forward for Premier League club Crystal Palace and the Ghana national team. He is the son of former Ghana captain Abedi Pele and brother of André Ayew, who plays for Swansea City.

Jordan Ayew is one of the top 10 richest footballers in Ghana.

He began his career with Porto, also spending a season on loan at Rio Ave. In 2013, he was signed by Chelsea for £3.5 million, who subsequently loaned him to Vitesse Arnhem, Everton, AFC Bournemouth and Málaga. After spending the 2016–17 season on loan at Newcastle United, he completed a permanent transfer to the club in May 2017.

with a net worth of $10 million, Christain Atsu is among the top 10 richest footballers in Ghana

More on the Top 10 Richest Footballers in Ghana below