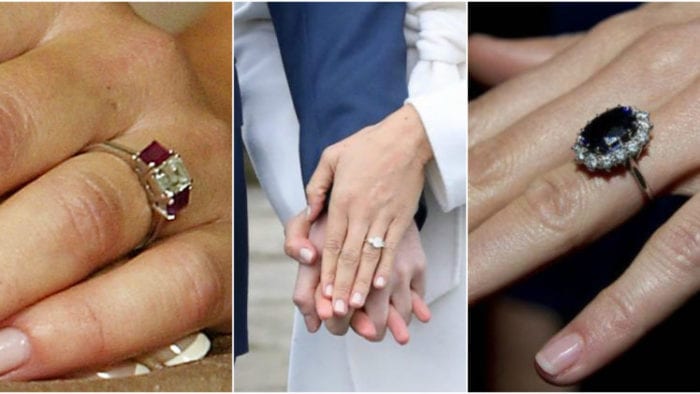 Marriage is something to be celebrated and cherished, so what better way to symbolise your love for someone, than an expensive piece of jewellery!

Now, saying that, there’s expensive and then there’s EXPENSIVE!! You’re about to see the $10 MILLION end of expensive!

The  Most Expensive Engagement Rings In the World

The list of engagement rings and figures mentioned below have been compiled from various sources around the web, such as Elite Readers, Hello Magazine & Brides.

These are the most expensive engagement rings in the world:

The first most expensive engagement ring on the list is owned by American rapper, Cardi B.

If you think dropping $500,000 of an engagement ring is a big deal, then keep reading as you they continue to get even more expensive!

The Duchess of Cambridge’s engagement ring consists of a 12-carat sapphire that’s surrounded by diamonds.

The ring actually has a lot more sentimental value than any normal engagement ring, as it was formerly worn by her late mother-in-law, Princess Diana.

Princess Diana was loved and adored by many, so to be fortunate enough to wear her ring is a massive privilege.

Next up, we have the engagement ring of Lady Gaga.

If you know anything at all about the performer, you’ll know that she’s pretty flamboyant and likes to do things big!
So, it’s no surprise that her engagement ring cost so much money. The ring is a unique heart-shaped solitaire diamond of roughly 6 carats, made by Lorraine Schwartz.

And to give it a more personal touch, the ring also includes the couple’s initials engraved on the inside of the platinum band.

If you’re into your hip-hop, then you’ll know who Iggy Azalea is.

The rapper/singer-songwriter has a number of hits like “Fancy, Work & Black Widow.

All those hits gained her a lot of attention, and one particular NBA star, Nick Young, like her so much that he ended up proposing to her.

The stone is surrounded by white diamonds and the whole ring is set in 18-Karat white gold.

In sixteenth place, we have the engagement ring given to Gabrielle Union.

NBA star Dwyane wade proposed to her with an 8.5-carat cushion-cut diamond in a platinum solitaire setting, made by Jason Arasheben.

It’s simple, minimal and elegant design allows the focus to be directly drawn to the main focal point – the cushion cut diamond!

When Brad Pitt proposed to Angelina Jolie back in 2012, he did it with some style.

It totally carat weight is approximately 16 carats which are all set in 18k yellow gold.

To make it even more sentimental, Brad designed the ring with the expertise of jeweller Robert Procop.

It weighs in around 10 karats and was designed by Jennifer’s friend, Jennifer Meyer.

It’s probably one of the most eye-catching engagement rings you’ll ever see, as you can’t help but notice the massive solitaire diamond!

The thirteenth most expensive engagement ring in the world is owned by model and actress, Kate Upton.

The $1.5 million engagement ring, is pretty gigantic, and it’s almost as big as her finances, Justin Verlander’s, World Series ring!

It’s certainly a bit of a show stopper that’s for sure.

Deadpool star, Ryan Reynolds, dazzled his bride to be with this $2.5 million engagement ring.

Its made by Lorraine Schwartz and features a 12-carat oval-cut solitaire diamond, set in 18 karat rose gold.

The ring is right on point when it comes to trend and also features small micro pavé diamonds in the band.

The ring was made by Harry Winston and features a 40.42-carat marquise-cut diamond.

It’s truly out of this world and well deserved of its place amongst the most expensive engagement rings in the world.

The Graff diamonds ring is very simplistic and oozes a sense of class.

After some initial speculation into the actual her husband paid for the ring, I’m sure by now she’s super happy with it!

When Marc Anthony proposed to Jennifer Lopez in 2004, he sure did it with some style!

The singer, songwriter and actress received a rare blue 8.5-carat diamond ring from Marc, which was valued at approximately $4.5 million!

Unfortunately, the marriage didn’t last, however, the engagement likely either held or increased its value, due to the association with the legendary performer.

Back in 1995, Prince Rainier III of Monaco proposed to Grace Kelley with a mahoosive 10.47 emerald-cut diamond ring, by Cartier.

The ring has received a lot of attention over the years, and rightly so, it’s an incredible piece of jewellery with a unique history.

If you’re in the market for an engagement ring and you have around $5 million to spend, then use this one as a reference point and you won’t go wrong!

Next up we have Paris Hilton‘s engagement ring giving to her by her ex-finance, Paris Latsis.

The $4.7 million 24-carat canary diamond ring ended up being auctioned off to help provide aid for the victims of Hurricane Katrina, as the couple decided to call off the wedding.

At least some good came out of it. $4.7 million bucks can go a long way in times of need.

Jay-Z proposed to Beyonce with an 18-carat emerald-cut flawless centre diamond, which is set on a split shank band.

The platinum band contains micro-pavé diamonds and was designed by Lorraine Schwartz. Since it’s creation, it’s also inspired a number of other celebrity engagement rings, some of which are featured on our list!

Overall, the ring is subtle, classy and striking all at the same time.

It’s certainly difficult to miss, and I’m sure it helps start a lot of conversations, as it’s striking, to say the least.

If you’re thinking of designing something for your partner, then perhaps using this one as your inspiration, might not be a bad idea, as it’s in the top five most expensive engagement rings in the world.

As always, only the best will do for Kim Kardashian.

The diamond itself is set as a solitaire on a thin platinum band with micro-pavé diamonds.

It really is a stunning example of bespoke jewellery and well worth its place amongst the most expensive engagement rings in the world.

In third place, we have Elizabeth Taylor’s engagement ring.

Elizabeth’s ring held the title for the largest and most expensive celebrity engagement ring of all time for several decades.

It’s a 33-carat Asscher cut Krupp Diamond, set in platinum which was given to her by Richard Burton.

It’s one hell of a ring, that’s for sure!

In second place, we have this stunning example of a truly unique engagement ring by Bvlgari.

The 5.4 blue carat diamond ring was purchased by Graff diamonds and once held the title of the worlds most expensive engagement ring.

Topping them all is Mariah Carey‘s $10 million engagement ring, given to her by her ex-finance, Australian businessman, James Packer.

The emerald-cut diamond ring is a whopping 35-carats and has two delicate tapered baguette diamonds. The ring is set in solid platinum.

Its single focus design insures the diamond truly shows off its splendour and magnificence!

The 20 Most Expensive Alcoholic Drinks In the World