. . The Chief Justice Of Ghana Salary And Functions | Glusea.com 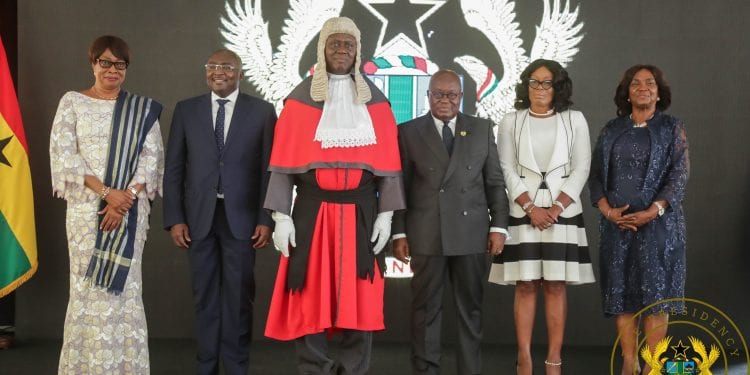 The current chief justice is Kwasi Anin-Yeboah. He succeeded Sophia Akuffo as the first male chief justice of Ghana in twelve years. Anin-Yeboah was sworn in as Chief Justice by President Akufo-Addo on 7 January 2020

History of the office of Chief Justice in Ghana

The Supreme Court Ordinance of 1876 ended the 10-year absence of a Supreme Court, establishing a Supreme Court of Judicature for the Gold Coast Colony. The court consisted of the chief justice and not more than four puisne judges.

This led to the appointment of the first chief justice, Sir David Patrick Chalmers by the British colonial authorities in 1876.

Under the 1957 Ghana constitution, on the attainment of independence, the chief justice and all superior justices were appointed on the advice of the prime minister as the Judicial Service Commission was abolished.

Sir Kobina Arku Korsah became the first Ghanaian chief justice. Under the 1969 constitution, the chief justice was appointed by the president acting in consultation with the Council of State.

The chief justice is appointed by the president of Ghana in consultation with the Council of State of Ghana and with the approval of the Parliament of Ghana.

A person qualified to be the chief justice of Ghana must be of a high moral character and have proven integrity,. S/he must have been a lawyer for at least fifteen years to have been eligible for appointment to the Supreme Court in the first place.

Functions of the Chief Justice of Ghana

The functions of the chief justice includes but not limited to the following;

Past Chief justices of Ghana