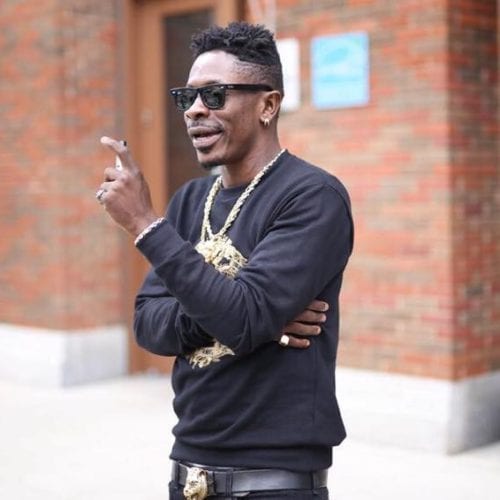 Charles Nii Armah Mensah Jr., (born October 17, 1984) is a Ghanaian-born producer and reggae–dancehall musician. He is known by his stage name Shatta Wale, formerly Bandana. His best known song is “Dancehall King”, which led to winning the Artiste of the Year at the 2014 edition of the Ghana Music Awards. Wale is also an actor, having appeared in the films Never Say Never ,The trial of Shatta Wale  and Shattered Lives.

Having achieved street credibility in a fairly undeveloped Ghanaian dancehall genre at the time, he achieved popularity with his 2004 single, “Moko Hoo”, which features Tinny. Then known in the industry as Bandana, the song earned him a Ghana Music Awards nomination. There afterwards, Bandana went missing in the music circus for nearly a decade until rebranding himself in 2013. He began releasing music under a new name, Shatta Wale, under his own record label (SM For Lyf Records)

In 2014, he peaked number 38 on E.tv‘s “Top 100 Most Influential Ghanaians” Awards chart.  He has since appeared on the chart each year. He was ranked “Most Influential Musician” on social media in 2017. he won 8 awards at the 3music awards in 2019 and also the most awarded dancehall artist in africa

Charles Nii Armah Mensah Jr. was born in Accra, Ghana at the Police Hospital on October 17, 1984. The son of a couple from Accra and the Volta Region of Ghana, his father is Charles Nii Armah Mensah Sr, a politician, businessman and legal practitioner. Shatta Wale attended Seven Great Princes Academy at Dansoman, a suburb in Accra, where he demonstrated an affinity for arts and acted in a popular Akan drama series, By the Fireside, at the National Theatre of Ghana. Growing up, he lived with his family in Laterbiokorshie, Dansoman and then later Korle Gonno during his formative years. In a Facebook live video, Wale stated that he did not enjoy motherly love and care at the early stages of his life because a pastor caused a separation between his parents which made him remain under his father’s care and later ending up on the streets. His mother is Elsie Evelyn Avemegah.

As a child, his father introduced him to the Jamaican culture by playing Reggae records in the house and also continuously traveling with him to the UK to meet his relatives who were half Jamaicans. These exposures made him develop love for music at a tender age. His intense passion to do music made him lose interest in schooling but his father forced him to complete his high school education later in the Volta Region of Ghana which had initially kicked off at the Winneba Secondary School in the Central Region of Ghana. Even in school and right after school he pursued his musical dream but his father did not agree and wanted him to become a lawyer, this led to a misunderstanding between the two eventually tearing down their beautiful relationship. Shatta Wale lived in almost all the ghettos (Nima) in Accra just to survive: “There were many times I slept without food. I have been through all the hustle in life, I mean hell. I have lived with the people and became one of their own. No wonder my music easily resonate with the people. I am thankful to God for making me see the day light.” Stated in an interview.

Shatta Wale later went to Jamaica to polish and master his dancehall craft. “Every boy in Ghana doing dancehall came for tutelage from me before mastering the dancehall genre. So no wonder my fans call me King because they know the history of modern dancehall in Ghana” Shatta Wale stated in an interview.

His musical career began during his high school days at the Winneba Secondary School where he learned to play keyboard and received routine vocal training at the school’s music class department, then known as Doggy. After secondary school, he took time to work on his music. Having achieved street credibility in a fairly undeveloped Ghanaian dancehall genre at the time, he soon gain recognition with his hit single, “Moko Hoo”, which featured fellow Ghanaian musician Tinny in 2004 using Bandana as his stage name. The song earned him a nomination at the Ghana Music Awards that year. Bandana followed with the hit songs “No Problem” and “Obaa Yaa”. At this point, he was receiving heavy rotation on radio and was backed by a fan base that shot him into the mainstream Ghanaian music scene. Despite his prominence, Bandana went missing in the music circus in Ghana.

With a rebranded name from Bandana to Shatta Wale, he started a new career which largely bothers on dancehall in a Jamaican style of production in Nima, a small community in Accra, Ghana, a place that harbors a lot of Muslim youth and ghettos. It was there he amassed a fanbase, who were influenced by him and felt empowered by his songs. Wale released songs almost everyday on his social media handles free to download and would performed them in small communities in Accra mostly in Nima. He started gaining slow attention again with songs like “Telephone No” “Anastasia” “My Eyes Pon Di Money” and others. This approach revived dancehall in Ghana, a genre which had been left abandoned. The likes of Root Eye, General Marcus, Yoggy Doggy and others years ago had started but could not breakthrough. Shatta Wale gives credit to the likes of Terry Bonchaka and Yoggy Doggy for nurturing him when he began his dancehall journey. “It was under their tutelage that they told me I was going to blow up and that my style is so unique.” Stated in an interview on PeaceFm. He explained in an interview with King Lagazee why he had been less active and what the reason for his decreased popularity was.

Largely producing and mastering majority of his songs such as “Havana”, “Shatta City”, “Enter the Net”, “Everybody Likes My Tin”, and “Dancehall King”, the latter of which became his biggest hit after his comeback. The tracks were well received in Ghana and globally, with critics talking about the influence of Jamaican dancehall as many Ghanaians were only used to the type of dancehall called Hiplife with a touch of ragga. Wale then successfully toured Canada and United States in 2014.

The Guardian qualified “Wine Ya Waist” featuring Davido among its five must listened new tracks from around the world. By 2015, without a doubt, he has cemented his place on the global music space as a force to reckon with in dancehall music with a solid repertoire of hit songs that were receiving international awards and nominations which some includes; International Reggae & World Music Awards, Nigeria Entertainment Awards, MOBO etc. He toured Europe in 2015, and also shared the same stage with P-Square, Flavor and others at the Wembley Arena in London.

In a heated political atmosphere, Wale became one of the most powerful men in Ghana as two biggest political parties, National Democratic Congress  and the New Patriotic Party used his hit songs; “Mahama Paper” and “Kakai” to run their campaign in the 2016 general election. In a desultory conversation with an interviewer, Wale stated that: There were some attempts by some members from the political parties to coax him to endorse their party but he did not cling because of his fans. There were banners in town bearing Shatta Movement for NDC but Wale in a Facebook post made it clear that he has not endorsed any political party and all parties running their campaign under the Shatta Movement Banner should desist or face legal action. However, wale did not hesitate to perform for any of the political parties as his service was demanded.

Songs released from After the Storm album like “Mahama Paper”, “Baby (Chop Kiss)”, “Biegya (Open Fire)”, “Hol’It”, and “Kakai” were successful in Ghana. Wale stayed atop the charts locally and also had “Hol’It” top BBC Radio 1Xtra‘s Afroboss Top 5 songs chart  Rockstar Games co-founder Sam Houser also said he was deeply impressed by the popularity of “KAKAI” and that it made waves within the African community in the United States and beyond, including topping several dancehall charts globally. For that, he stated his wish that bureaucrats would confirm “Kakai” to appear in the upcoming Grand Theft Auto 6. If confirmed, Wale could earn up to $744,000 annually.

In 2017, he toured the US to promote After the Storm, then traveled to Jamaica to shoot videos for projects he had jointly done with some producers there.

Wale signed with Zylofon Music in January 2018. He released his third album, Reign, on October 13 at the Fantasy Dome in Accra, and used the occasion to propose to his longtime girlfriend Michy on stage. The album achieved a record for a Ghanaian act by appearing on the Billboard Top World Albums Chart, placing sixth.

Mayor of Worcester, Joseph Petty, presented Shatta Wale with the Key to the City on July 8, 2017, in recognition of his contributions to the arts.

In September 2017, Kasapreko Company, producers of several alcoholic and non-alcoholic beverages in Ghana, unveiled Wale as their newest brand ambassador.

On 17 November 2017, Shatta Wale signed a deal with Boss Baker Beef Roll as the brand ambassador.

In 2014, Shatta Wale was nominated for the Maiden GN Bank Awards as the People’s Choice Male Musician of the year. He was also named the 38th Most Influential Ghanaian by E-TV Ghana in 2015 in their annual survey of influential people in Ghana. He is currently the most Awarded Dancehall artist in Africa and one of the most awarded dancehall artist in the world

READ SHATTA WALE NEWS AND ALL INFORMATION ABOUT HIM HERE