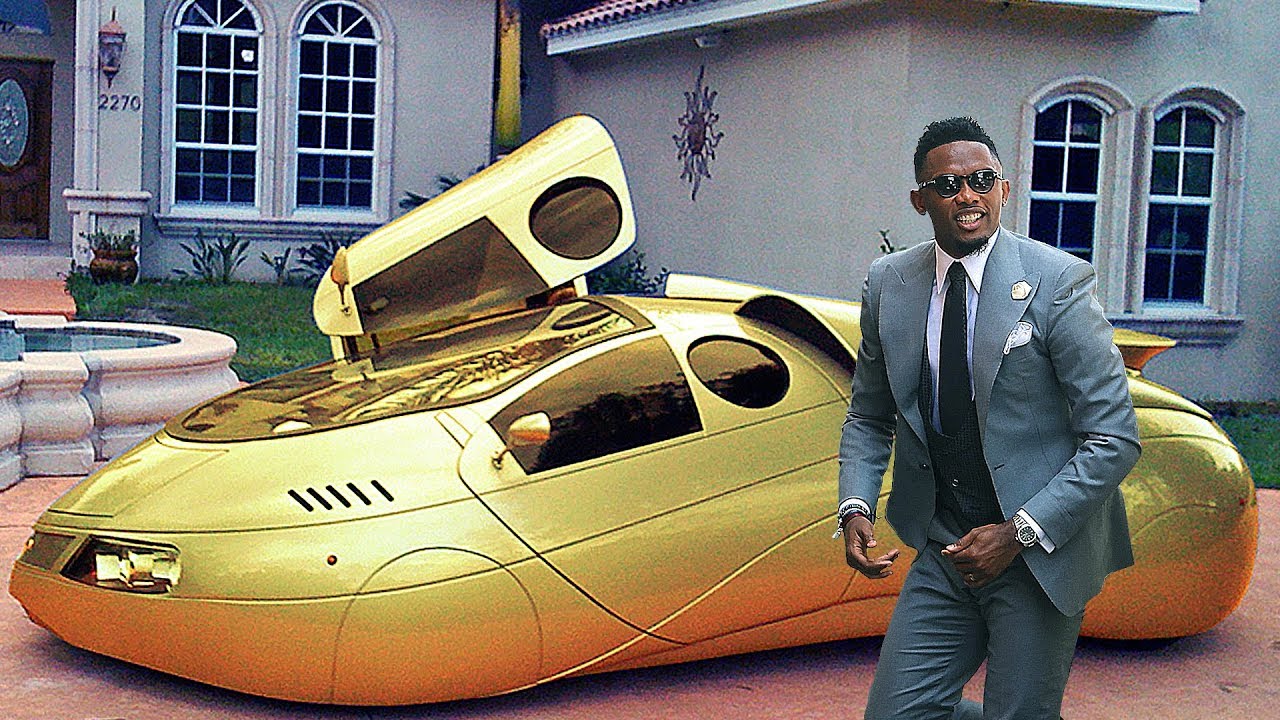 Eto’o was considered one of the best strikers in the world be because of his goal scoring prowess which helped the various clubs he played for.

The Cameroonian prolific forward acquired great fortune in the course of his football career as his clubs used to pay heavily for his services. So now that he is no longer in the field of play, how has he been living his life? We will be taking a look at the various car collection in his possession as well as his houses. Before that let me take you on a short journey through the biography of the former forward who has won all there is to win at various clubs during his career.

Samuel Eto’o Fils was born in Douala, Cameroon, on March 10, 1981. He began his youth career at Kadji Sports Academy, a local club in his home country of Cameroon in 1992,before moving to Real Madrid in 1996. He rose through the youth ranks of Real Madrid to the first team in 1997. Due to the number of other experiences and prolific forwards at the club, Samuel Eto’o became a victim of several loan spells at various clubs. His last loan spell at Mallorca saw him grow to become a very deadly striker and soon became an integral part of the squad and the club who made the loan deal permanent in 2000.

Samuel Eto’o went on to register a total of 48 goals for Mallorca, in 120 appearances before he was acquired by FC Barcelona in 2004. By the time he joined Barcelona, Samuel Eto’o had established himself to be a goal machine who very confident with the ball in his feet and always clinical in front of goal. He later joined Inter Milan in 2009 after helping Barcelona to win the 2008/2009 UEFA Champions League where he scored the first goal in the final. Samuel Eto’o has also played in other clubs such as Anzhi Makhachkala, Chelsea, Everton, Sampdoria, Antalyaspor, Konyaspora and Qatar SC before he hung his boot in 2019.

He has also represented the Cameroon national team 118 times during which he won the African Cup Nations twice before retiring from international duty in 2015.

I know you are eager to know what cars are parked in the garage of the legendary forward, this part brings you a compilation of the various luxury and expensive cars owned by the Cameroonian legend Samuel Eto’o. You will be thrilled to know that just like other celebrities, the former Barcelona and Chelsea forward has great taste for luxury and thus is evident in his various car collections.

For someone like Samuel Eto’o, you would expect him to own expensive and exotic cars and he has lived up to that expectation as we can see in the price of the Aston Martin One-77 which is one of the most expensive ride in the world.

The luxury ride has a jaw dropping 700hp with a 7.3 liter V-12 engine type along with a 6-speed Graziano automated manual transmission. The accelerates at 62mph in 3.7 seconds and a speed maximum of 220 mph.

Another mega million dollar worth of luxury ride among Samuel Eto’o cars is the Maybach Xenatec 57S Coupe. Trust me if one is to compile a list of footballers with the most expensive rides, definitely Samuel Eto’o will be among the top 20.

The luxury ride has some awe-inspiring features such as Twin-turbo 6.0 liter V12 engine type with 640 horsepower. It has soft-closing doors with double window glazing to electric headrests along with a fridge which you can store your drinks for the purpose of chilling. The make up of the engine is world class which matches with the price of the car.

The 2013 Rolls-Royce Wraith black is another world class, parked in the garage of the former African footballer of the year award winner. The super fast ride with spacious interior comes with a 6.6 litre Twin Turbo V12 engine type and two coached doors, hard top Coupe. It also boast of a massive 8-speed ZF 8HP automatic transmission. It accelerates from 0 to 60 mph in 4.4 seconds.

The Ferrari 458 Italia Mansory Siracusa is a sport ride that is capable of running at a high speed of 330 km/h and accelerate from 0 to 100mph in 3.2 seconds, with a central locking system. The combination of the wheel and tyre provides stability and agility to the car as it runs on a high speed.

The Ferrari 599 is another world class luxury ride among Samuel Eto’o cars . It comes with a 6.0 litre V12 Cylinder engine with a 740-775 hp. The well crafted interiors is mind blowing as well as an ultra-light aluminum alloys that enhances acceleration.

Having read the luxurious list of Samuel Eto’o cars , let us also take a look at a dashing private jet owned by the ex Barcelona star.

Not much is known about Samuel Eto’o’s houses but the notable one is the mansion he bought while he was playing for Sampdoria. He also owns several mansions in his country Cameroon.

Does Eto o have a private jet?

Yes. Samuel Eto’o is among the African footballers who own private jets

Is Samuel Eto a billionaire?

Currently, Samuel Eto’o has a net worth of $95 million making him the richest footballer in Africa. He is not yet a billionaire

What do you think about Samuel Eto’o cars and houses? leave your rely in the comments below