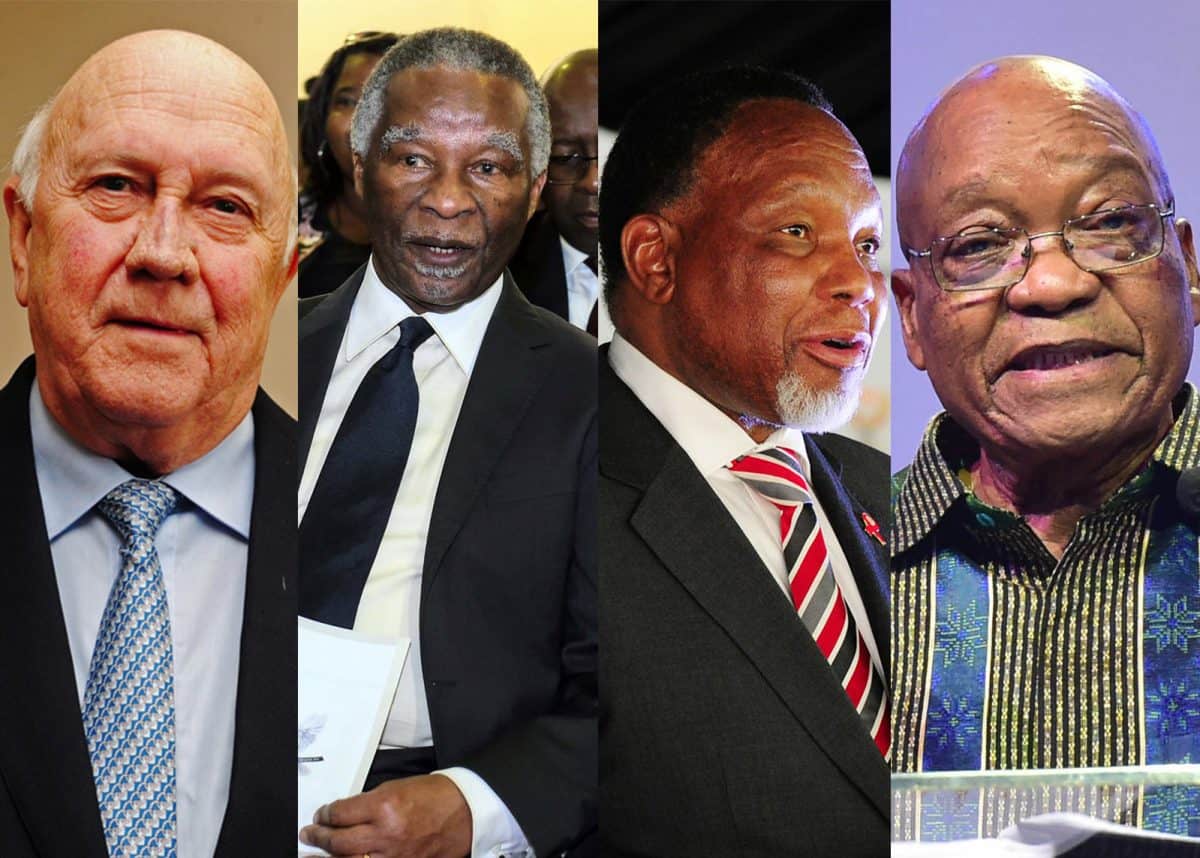 Glusea.com brings to the richest presidents in Africa 2023

Africa is often perceived as the poorest continent in the world. A lot of the world leaders attribute this to poor governance, political instability. It is often said that most of the leaders in Africa take up leadership positions for their own gain. How true is this?

We have put together the top 10 richest presidents in Africa 2023. This list was compiled from Fatumasvoice and African Hype. Before you read through can you guess which president will be in the list?

Mohammed VI (born 21 August 1963)  is the King of Morocco. He is a member of the Alaouite dynasty and ascended to the throne on 23 July 1999 upon the death of his father, King Hassan II.

Mohammed is Morocco’s leading businessman and banker. In 2015, he was estimated by Forbes magazine to be worth US$2.5 billion, and the Moroccan Royal Family has one of the largest fortunes in the world.

Ali Bongo Ondimba (born Alain Bernard Bongo; 9 February 1959), sometimes known as Ali Bongo, is a Gabonese politician who has been President of Gabon since October 2009.

Ali Bongo is the son of Omar Bongo, who was President of Gabon from 1967 until his death in 2009. During his father’s presidency, he was Minister of Foreign Affairs from 1989 to 1991 and represented Bongoville as a Deputy in the National Assembly from 1991 to 1999; subsequently he was Minister of Defense from 1999 to 2009.

Following his father’s death after 41 years in power, he was first elected in the August 2009 presidential election. Read William Ruto Net Worth

He was re-elected in August 2016, in elections marred by numerous irregularities, arrests, human rights violations and post-election violence. Bongo is also President of the Gabonese Democratic Party.

Teodoro Obiang Nguema Mbasogo  is an Equatoguinean politician who has been President of Equatorial Guinea since 1979. He ousted his uncle, Francisco Macías Nguema, in an August 1979 military coup and has overseen Equatorial Guinea’s emergence as an important oil producer, beginning in the 1990s. Obiang was Chairperson of the African Union from 31 January 2011 to 29 January 2012. He is the second longest consecutively serving current non-royal national leader in the world.

Obiang has been widely accused of corruption and abuse of power. In marked contrast to the trend toward democracy in most of Africa, Equatorial Guinea is currently a dominant-party state, in which Obiang’s Democratic Party of Equatorial Guinea (PDGE) holds virtually all governing power in the nation. The constitution provides Obiang sweeping powers, including the right to rule by decree, effectively making his government a legal dictatorship.

Uhuru Muigai Kenyatta  is a Kenyan politician, businessman, and the fourth and current President of the Republic of Kenya He served as the Member of Parliament (MP) for Gatundu South from 2002 to 2013. Currently, he is a member and the party leader of the Jubilee Party of Kenya. Uhuru was previously associated with the Kenya Africa National Union before joining The National Alliance, one of the allied parties that campaigned for his reelection during the 2017 general elections.

Read Richest Man in The World

Paul Kagame  is a Rwandan politician and former military leader. He is the 4th and current President of Rwanda, having taken office in 2000 when his predecessor, Pasteur Bizimungu, resigned. Kagame previously commanded the Rwandan Patriotic Front, the Uganda-based rebel force that invaded Rwanda and was one of the parties of the conflict during the Rwandan genocide. He was considered Rwanda’s de facto leader when he served as Vice President and Minister of Defence from 1994 to 2000. He was re-elected in August 2017 with an official result of nearly 99% in an election criticized for numerous irregularities. He has been described as the “most impressive” and “among the most repressive” African leaders.

Matamela Cyril Ramaphosa  is a South African politician and the fifth and current President of South Africa. He succeeded Jacob Zuma. Previously an anti-apartheid activist, trade union leader and businessman, Ramaphosa served as the Deputy President of South Africa from 2014 to 2018. He was elected President of the African National Congress (ANC) at the ANC National Conference in December 2017. He is also the former Chairman of the National Planning Commission, which is responsible for strategic planning for the future of the country, with the goal of rallying South Africa “around a common set of objectives and priorities to drive development over the longer term”. Ramaphosa was elected president by the National Assembly to his first full term on May 22 following the ANC’s victory in the 2019 South African general election. In 2020, Ramaphosa began serving as Chairperson of the African Union.

He has been called a skillful negotiator and strategist  who acted as the ANC’s Chief Negotiator during South Africa’s transition to democracy. Ramaphosa built up the biggest and most powerful trade union in the country – the National Union of Mineworkers (NUM). He played a crucial role, with Roelf Meyer of the National Party, during the negotiations to bring about a peaceful end to apartheid and steer the country towards its first fully democratic elections in April 1994

Mswati III is the king of Eswatini and head of the Swazi Royal Family. He was born in Manzini in the Protectorate of Swaziland to King Sobhuza II and one of his younger wives, Ntfombi Tfwala. He was crowned as Mswati III, Ingwenyama and King of Swaziland, on 25 April 1986 at the age of 18, thus becoming the youngest ruling monarch in the world at that time. Together with his mother, Ntfombi Tfwala, now Queen Mother , he rules the country as an absolute monarch. Mswati III is known for his practice of polygamy (although at least two wives are appointed by the state) and currently has 15 wives. His policies and lavish lifestyle have led to local protests and international criticism.

Abdel Fattah Saeed Hussein Khalil el-Sisi  is an Egyptian politician who is the sixth and current President of Egypt, former Director of Military Intelligence, former Minister of Defence, and former General. Starting 10 February 2019, Sisi also began serving a one-year term as Chairperson of the African Union, which concluded in 2020.

Sisi was born in Cairo and after joining the military, held a post in Saudi Arabia before enrolling in the Egyptian Army’s Command and Staff College. In 1992, Sisi trained at the Joint Services Command and Staff College at Watchfield, Oxfordshire, in the United Kingdom, and then in 2006 trained at the United States Army War College in Carlisle, Pennsylvania. Sisi served as a mechanized infantry commander and then as director of military intelligence. After the Egyptian revolution of 2011 and the election of Mohamed Morsi to the Egyptian presidency, Sisi was appointed Minister of Defence by Morsi on 12 August 2012, replacing the Mubarak-era Hussein Tantawi.

Isaias Afwerki (born 2 February 1946, is the first and current president of Eritrea, a position he has held since after the Eritrean War of Independence in 1993. He led the Eritrean People’s Liberation Front (EPLF) to victory in May 1991, ending the 30-year-old war for independence.

Isaias is the leader of Eritrea’s sole legal political party, the People’s Front for Democracy and Justice (PFDJ). He has been cited for human rights violations by the United Nations and Amnesty International. In 2015, Reporters Without Borders ranked Eritrea under the government of President Isaias Afewerki last in its press-freedom index for the eighth year running.

General Idriss Déby Itno is a Chadian politician who has been the President of Chad since 1990. He is also head of the Patriotic Salvation Movement. Déby is of the Bidyat clan of the Zaghawa ethnic group. He took power at the head of a rebellion against President Hissène Habré in December 1990 and has since survived various rebellions against his own rule. He won elections in 1996 and 2001, and after term limits were eliminated he won again in 2006, 2011, and 2016. He added “Itno” to his surname in January 2006. He is a graduate of Muammar Gaddafi’s World Revolutionary Center.

In conclusion, the source of wealth for most of the richest presidents in Africa is as a result of their long term in office.