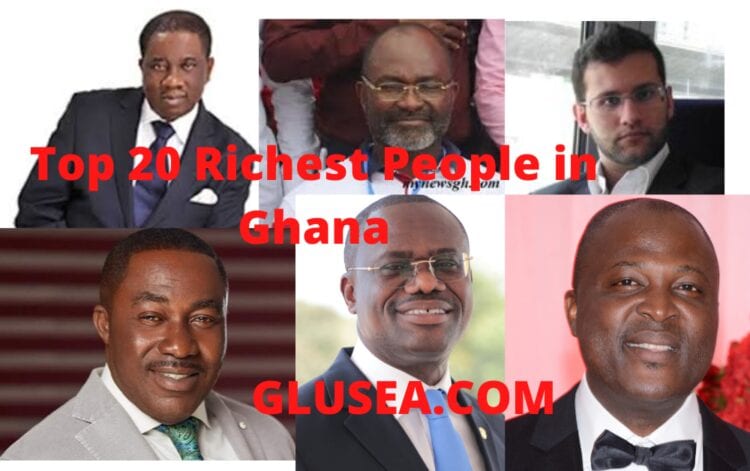 Read the richest women in Ghana 2020

Ghassan Yared owns Forewin Ghana Limited, a Distribution and Marketing Company which was launched in Ghana in March 1993. Rising from very modest beginnings, Hassan has been able to move his company quickly to carve a name for himself and a prominent place on the Ghanaian market map.

Kwabena Adjare Danquah, is a Ghanaian businessman who founded Metalex in 1984 to produce competitively priced high-quality roofing materials. Situated in a suburb of Accra, the company started as a retailer of aluminium roofing sheets but later became a manufacturer of aluminium, clay and plastic roofing materials. Metalex owns other factories which produces clay roofing products and plastic roofing products.

Elias Azar, a Lebanese immigrant in Ghana set up Azar Chemical Industries as a family business in 1968. The company initially operated under the name City Paints and traded in building materials and imported paints.

The company began manufacturing paints in Ghana in the 1980s, operating under the name Azar Chemical Industries which later became the Azar Group, comprising City Paints Supply Limited and Synrez Ghana Limited. City Paints deals in paints and related products, while Synrez deals in the production of packaging products.

Read The top 25 richest People in the World

Robert Hitti set up Qualiplast in 1973 as a small factory with the name Greenplastica Limited in 1973. A family business, the company started with one small depot and equipment that gave it an operating capacity of between 50 metric tonnes and 100 metric tonnes per month. With a total of 60 employees, its annual turnover fluctuated between US$200,000 and US$300,000 in the early years. The name of the company was changed to Qualiplast in 1992.

In the early 1950’s, Alhaji Adamu, secured his first contract as a sawn timber supplier to GNTC, a successor of A. G. Leventies. From then on Alhaji went on to acquire other contracts to cart goods for A. G. Leventies, Cocoa for Ghana Cocoa Marketing Board and fertilizer for the Ministry of Agriculture.

By 1996, on realizing the need to expand his transport business Alhaji set up A. A. Iddrisu Transport which later became Global Haulage Ltd.

As of 2014, Global Haulage operated a total number of 388 trucks for various haulage roles. These are made up of 271 Articulators, 111 Cargo trucks.

Mr Joseph Siaw Agyepong is the founder of the Jospong Group. It is one of the largest conglomerates in Ghana with over 32 subsidiaries. The Jospong Group currently operates in eleven industries in Ghana. He is number  13 of  richest people in Ghana

Milad, a Ghanaian of Lebanese descent founded Millet Textile Corporation Limited in 1958. The company was originally established to manufacture towels. In the early 1980s, the firm changed its name to Spintex Limited and it developed into an integrated textile firm that manufactured high-quality textiles for the Ghanaian and wider African market.

International Monetary Fund and the World Bank, which resulted in the abolition of import restrictions. Locally produced textiles could not compete with low-priced used clothing. The name of the company was subsequently changed to Printex in 1997.

The late Nana Awuah-Darko Ampem was the first Ghanaian Captain of the Accra Polo Club and also an Nkosuohene of Ashanti Juaso. He first established Marine and General Insurance Brokers in 1969 after returning from his studies and working abroad. Nana Ampem was compelled to start Vanguard Assurance in 1975 after a law in 1972 made it obligatory for all government institutions in Ghana to deal directly with State Insurance Company and not through a broker.

Number 10 of The richest people in Ghana

Kwabena Duffuor is the Chief Executive Officer of closely held House of Duffour Asset Holdings. He expanded into his real estate portfolio by snapping up skyscrapers in Accra which mostly houses his companies. He is number 10 of the richest people in Ghana.

Prior to the First World War, the grandfather of the current Managing Director of Japan Motors Ghana, Salem Kalmoni, arrived in Ghana from Lebanon to start some trading activities. His company, Kalmoni & Sons, soon branched into truck-boards, and in 1958 he imported the first Japanese car; a Datsun, a brand name which was later changed into the world-famous Nissan.

Kalmoni & Sons was renamed Japan Motors in 1965. Today it has five branches across Ghana and employs over 330 people.

Patricia Poku-Diaby was involved in her family’s business (trading and transportation) before she set up the Plot Enterprise Group in Ivory Coast, which was a precursor to the Ghanaian company.

Plot Commodities deals in cotton and cocoa and is registered with the Cocoa Merchants Association of America. Plot Enterprise in Ivory Coast is engaged in the trading of cocoa, cashew nut and wood products.

Two Lebanese brothers, Anthony Irani and Edmund Irani, who immigrated to Ghana founded Irani Brothers & Others Limited in 1967 to produce wheat flour for the bread and pastry industry. It accounts for about 60% of wheat flour sales in Ghana. They provided the required start-up capital and have operated and managed the firm as a family business ever since. Anthony and Edmund Irani, who both had technical expertise in the flour milling business, provided leadership for the company.

Ibrahim’s interest in private sector business began with his development of interest in heavy duty equipment whilst assisting his father on his mechanized rice farms in Tamale, Ghana. He developed a further interest in the U.K. where he resided for a period of five years and worked in the civil construction industry in Scotland. He also worked with M&M Properties in the U.K., a property development company.

Nabil Moukarzel owns the most shares by value in The Finatrade Group which is one of the largest food manufacturing and food distribution companies in West Africa. Moukarzel’s company is Ghana’s largest distributor of food and importer of rice with its Rice Master and Sultana rice brands.

Sir Sam Jonah reached the prime of his career when he led the $1.48 billion merger between Ashanti Goldfields and AngloGold in 2004. A lot of mining companies have benefited from Sam Jonah’s expertise in the mining industry. Sam’s equity fund, Jonah Capital owns 14 mineral resource assets across 10 countries in Africa.

Ernesto Taricone is an industrial investor and civil engineer, he is the Executive Chairman and CEO of Trasacco Group which employs over 4000 Ghanaians and expatriates. He is number 2 on the list of richest people in Ghana

Ernesto Taricone was born in Italy in 1948; he came to Ghana in 1968 with his father and two brothers when he was still in his teens. The majority of his business is focused on Ghana covering various key sections in the Ghanaian Economy; Agriculture, Mining, Forestry, Construction and Real Estate development.

Charles Ampofo is the Chairman and Founder of Kampac Group which is headquartered in the business hub of Dubai in the United Arab Emirates. The Group engages in various activities and operates Kampac Oil as its primary business. Other companies under the Group includes Kampac Properties, Kampac Travels, Kampac Flora, Kampac Telecom and Kampac Resources. He is the richest man in Ghana

In 1999, Ampofo  founded Universal Transfer Service as a Financial Services and Funds Transfer company which went on to build an entire multi-banking network in Côte D’Ivoire which consisted of 24 banks. Under his leadership, the company has post growth of more than 30% over the last 10 years.

Information was obtained  from Goodmanamcblogspot, Wikipedia, and Yen.com.gh for writing this article.

Kwame Despite Net Worth 2021

Top 10 African Countries with the Most Beautiful Women 2021

In this article, Glusea brings to the top 10 African Countries With the Most Beautiful Women 2021. African women, black women or dark skin women are generally charming, beautiful and attractive. 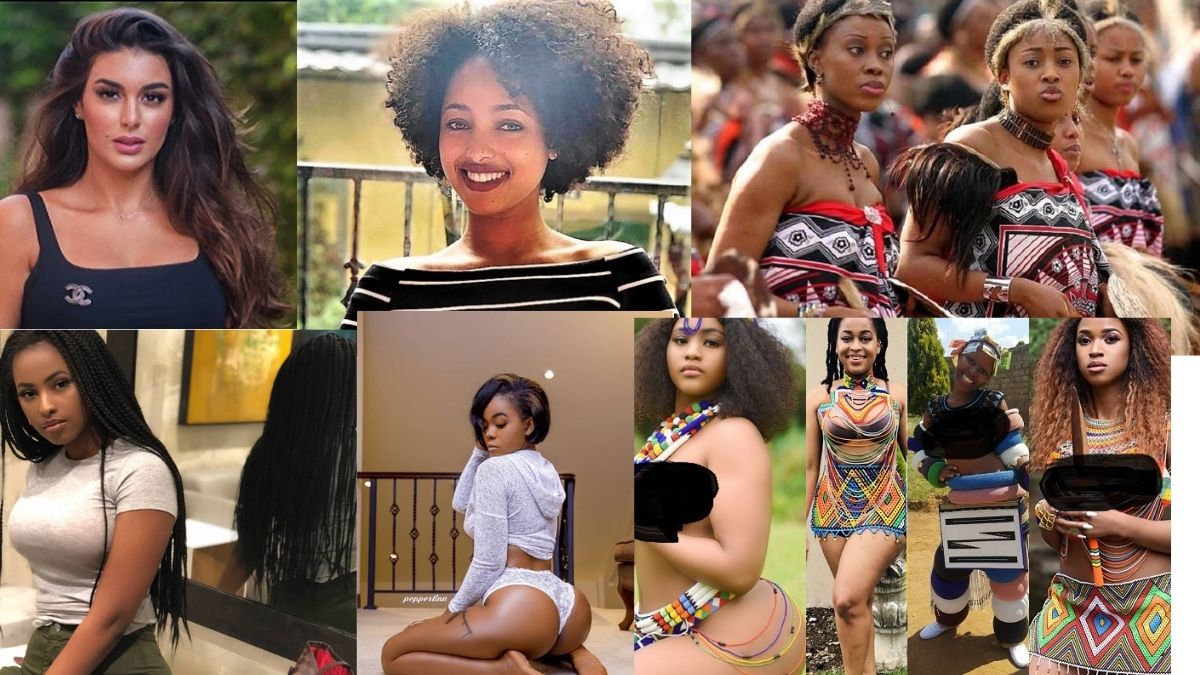 Top 10 African Countries with the most beautiful women 2021

Somalia is the African country with the most beautiful women. Somalia is an Islamic country and most of the women are covered from heard to toe but if you happen to visit the East African Country, one thing that will stern you is the beauty of their women. Somali ladies are very attractive, curvy and well mannered.

The country may have had several cases of instability, poverty, and some bad cultural practices, they have the most beautiful women in the African continent

Another African country with the most beautiful women is Ethiopia. They are brave, charming and very attractive.

The ladies of Ethiopia charm foreign men with their rare beauty. These women differ from girls from other countries by their personal features.

They are independent, hard-working, and strong. Ethiopian women are religious and modest. These peculiarities are perfectly combined with the adorable appearance of girls from Ethiopia.

Top 10 African Countries with the most beautiful women 2021 list would not be complete without the mentioning of Egyptian women. though an Islamic country and the. women are often seen covered from head to toe, Egypt has some of the most gorgeous women in Africa.

Since the ancient times, Egyptian women learn to take care of their looks.

If you happen to visit South Africa, their women would provide you the through definition of beauty. South African women will feed your fantasies with their stunning looks.

South Africa is home to people from different races; African, Afrikaans, Asians etc. This provides a rainbow of colour for the people. South African women are well cultured, respectful and good looking. This makes the nation one of the top 10 African countries with the most beautiful women.

Read countries with the most beautiful women in the world

Among the list of the African countries with the most beautiful women is Ghana. Ghanaian women are well known to have charming looks, independence and essentially outgoing.

Those from the Southern part of the country are easy going, entertaining and hardworking.

Beauty is dynamic, Cameroon women takes the idea of beauty to the next level with their natural hair styles, charming body and strong sense of humor.

Women in Cameroon are not only known for their beauty, but their rich cultural and mixed ethnicity.

If you happen to visit some of the largest cities in Nigeria, Lagos, Abuja, Port Harcourt, you would see a lot of beautiful ladies flaunting the streets of the west African nation.

If you have an intention to date a Nigeria woman, then you have to be a hardworking man. Nigerian women are very strong and hard working. It takes a lot to take care of them though.

Tanzanian women are well known for their tall stature, dark skin, high cheek bones and a shinning glowing skin tone. The South East African nation is blessed with some of the most beautiful women in the African continent.

Their breathtaking looks coupled with their captivating physical features makes if more difficult to resist women from Tanzania as a man.

Take a visit to the Kingdom of Swaziland and you will understand why their King is married to 15 wives (lol).

Number 10 of our list of the top 10 African Countries with the most beautiful women is Kenya.

The post colonial Kenyan women and very industrious, gorgeous and have a good sense of fashion.

If you are looking for dark skin women that glows, Kenyan women have got it. Women in Kenya are curvy, open minded and adventurous.

Thanks for reading about the Top 10 African Countries with the most beautiful women. Dont forget to represent your country in the comments below.