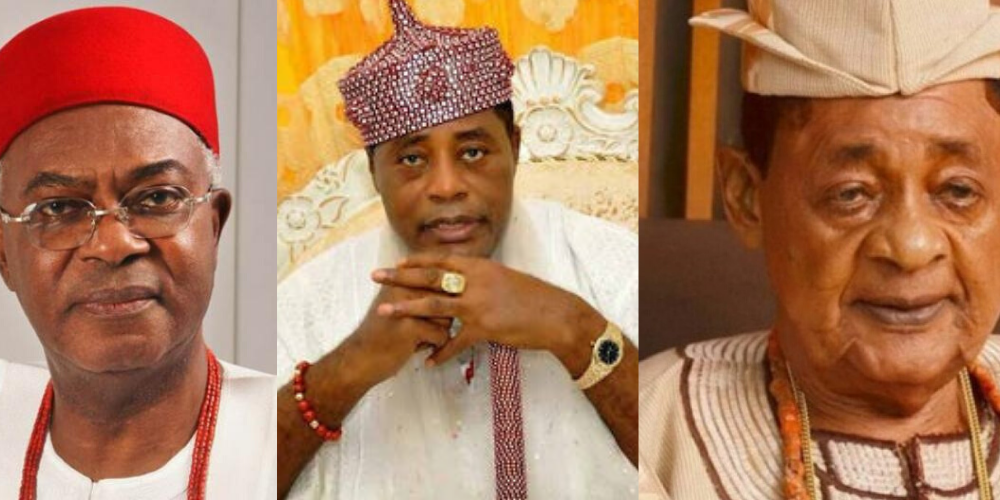 We bring to you the top richest Kings in Nigeria. Nigeria is home to some of the most respected monarchs in Africa. These Monarchs do not directly take part in political decision making, however, they are very instrumental to the development of their respective communities.

In this article, we take you through the richest kings in Nigeria.

Fredrick Obateru Akinruntan is a Nigerian monarch, the traditional ruler of Ugbo Kingdom, a town in Ilaje Local Government, Ondo State, southwestern Nigeria. His net worth is estimated at $300 million making him the richest in Nigeria.

He is an oil magnate and founder of Obat Oil, one of Nigeria’s largest and leading privately-held oil companies. He has a custom-built 2012 Rolls Royce similar to that of Queen Elizabeth II

Obateru established Obat Oil in 1981. Today, the company has more than 50 gas stations across the six geopolitical zones of Nigeria and the company owns one of the largest tank farms in Africa, a modern storage facility able to store 65 million liters of petroleum products.

Oba Adeyeye Enitan Ogunwusi, Ojaja II, is a Nigerian monarch. He is the traditional ruler, or Ooni, of the Yoruba kingdom of Ile-Ife. He has held his title since 2015 after the death of king Olubuse II

Adeyeye Enitan Ogunwusi is worth an estimated value of $70 million.

He is a member of the Institute of Chartered Accountants of Nigeria.

He is also an Associate Accounting Technician. Oba Ogunwusi is a certified member of the Institute of Directors.

He is also a member of the Global Real Estate Institute. He holds a number of honorary doctorate degrees: one in Public Administration from the University of Nigeria, Nsukka, and another in Law from Igbinedion University.

Read Richest Kings in the World

Oba Ogunwusi is the Chancellor at the University of Nigeria, Nsukka.

Muhammadu Sa’ad Abubakar IV is the 20th Sultan of Sokoto. As Sultan of Sokoto, he is considered the spiritual leader of Nigeria’s one hundred million Muslims, roughly fifty percent of the nation’s population.

He is also the head of Jama’atu Nasril Islam (Society for the Support of Islam – JNI), and president-general of the Nigeria Supreme Council for Islamic Affairs (NSCIA)

Nnaemeka Alfred Achebe is a traditional ruler and the 21st Obi of Onitsha, in Anambra State, South-Eastern Nigeria.

Achebe also serves as the chairman of the board of Directors of Unilever Nigeria, and the Chairman of International Breweries (ABInBev) Nigeria.

Before emerging as the Obi of Onitsha, in 2002, he had a long and distinguished career in the Royal Dutch Shell Group serving as Director in various companies in the group.

Lamidi Olayiwola Adeyemi III  is the Alaafin, or traditional ruler, of the Yoruba town of Oyo and rightful heir to the throne of its historic empire.

Lamidi Adeyemi succeeded Alaafin Gbadegesin Ladigbolu II in 1970, during the governorship of Colonel Robert Adeyinka Adebayo, after the end of the Nigerian Civil War.Adeyeye Enitan Ogunwusi

More on Richest Kings in Nigeria

He succeeded his elder brother Ogiame Atuwatse II who died in March 2015.

He was crowned Ogiame Ikenwoli on the 12th of December 2015

He is one of the richest Kings in Nigeria

Richest King in the World