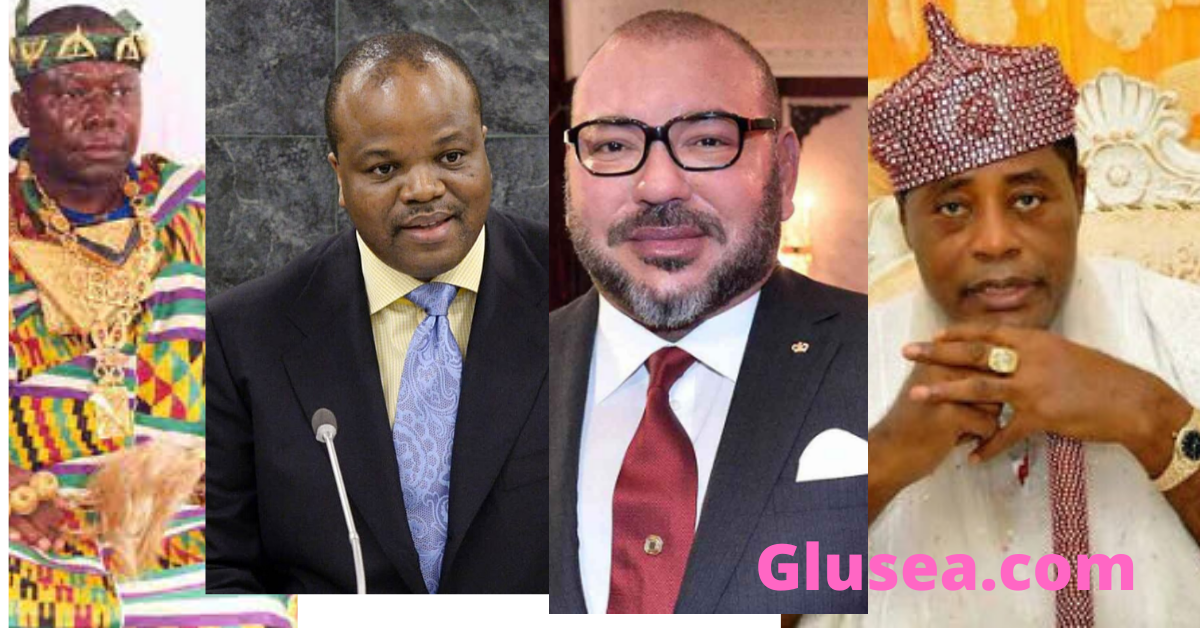 Richest Kings in Africa 2022: Africa has some of the most powerful Kings in the world. They are regarded as the traditional monarchs of their respective kingdoms.

Being a King in Africa is an extremely lucrative affair. They generally earn income through generous giving from community members, the Sale of community assets including land, and allowances from governments, among others. Read on to find the richest kings in Africa here.

However, most Kings in Africa are also successful businessmen. Take a look at the richest King in Africa and the list of the top 5 below.

King Mohammed VI of Morocco is the richest King in Africa. He has a net worth of about $5.4 billion.

King Mohammed derives his fortune from his control of Société Nationale d’Investissement (SNI), a large Moroccan investment holding company with assets valued at more than $10 billion.

The King also owns a substantial chunk of the world’s phosphate reserves.

Mohammed is also a leading agricultural producer and landowner in Morocco, where agriculture is exempted from taxes.

His palace’s daily operating budget is reported by Forbes to be $960,000—which is paid by the Moroccan state as part of a 2.576 billion Dirhams/year budget as of 2014—owing much of it to the expense of personnel, clothes, and car repairs.

Fredrick Obateru Akinruntan is a Nigerian monarch, the traditional ruler of Ugbo Kingdom, a town in Ilaje Local Government, Ondo State, southwestern Nigeria. His net worth is estimated at $300 million making him the richest in Nigeria.

He is an oil magnate and founder of Obat Oil, one of Nigeria’s largest and leading privately-held oil companies. He has a custom-built 2012 Rolls Royce similar to that of Queen Elizabeth II

Obateru established Obat Oil in 1981. Today, the company has more than 50 gas stations across the six geopolitical zones of Nigeria and the company owns one of the largest tank farms in Africa, a modern storage facility able to store 65 million liters of petroleum products.

Fredrick Obateru Akinruntan is one of the richest kings in Africa

Oba Adeyeye Enitan Ogunwusi, Ojaja II, is a Nigerian monarch. He is the traditional ruler, or Ooni, of the Yoruba kingdom of Ile-Ife. He has held his title since 2015 after the death of king Olubuse II

Adeyeye Enitan Ogunwusi is worth an estimated value of $70 million.

He is a member of the Institute of Chartered Accountants of Nigeria.

He is also an Associate Accounting Technician. Oba Ogunwusi is a certified member of the Institute of Directors.

He is also a member of the Global Real Estate Institute. He holds a number of honorary doctorate degrees: one in Public Administration from the University of Nigeria, Nsukka, and another in Law from Igbinedion University.

Oba Ogunwusi is the Chancellor at the University of Nigeria, Nsukka and is among the richest kings in Africa

King Mswati III is worth $50 million. Mswati III  is the king of Eswatini and head of the Swazi Royal Family. He is one of the wealthiest monarchs in Africa

He was crowned as Mswati III, Ingwenyama and King of Swaziland, on 25 April 1986 at the age of 18, thus becoming the youngest ruling monarch in the world at that time.

In the 2014 national budget, parliament allocated $61 million (US) for the King’s annual household budget.

The king currently has 15 wives and 35 children(maybe more)

He is known for his love for luxury vehicles including luxury cars, including a $500,000 DaimlerChrysler’s flagship Maybach 62 luxury automobile and many more

Mswati has a personal stake in a large portion of Eswatini’s economy which is a factor in its below-average economic growth for a Sub-Saharan nation.

As an absolute monarch, he holds the power to dissolve parties and can veto any legislation parliament passes.

Otumfuo Osei Tutu II is one of the richest kings in Africa. He is the King of Ghana’s gold-rich Ashanti kingdom, home to the country’s largest ethnic group, the Asantes. He is worth about $ 10 million

He ascended the throne in 1999 and serves as the political and spiritual head of the Asante people.

Who is the richest king in Africa?

He belongs to the ‘Alawi dynasty and acceded to the throne on 23 July 1999, upon the death of his father, King Hassan II. Upon ascending to the throne, Mohammed initially introduced a number of reforms and changed the family c

Who is the best king in Africa?

Most powerful Kings in the history of Africa are

the richest kings in Africa