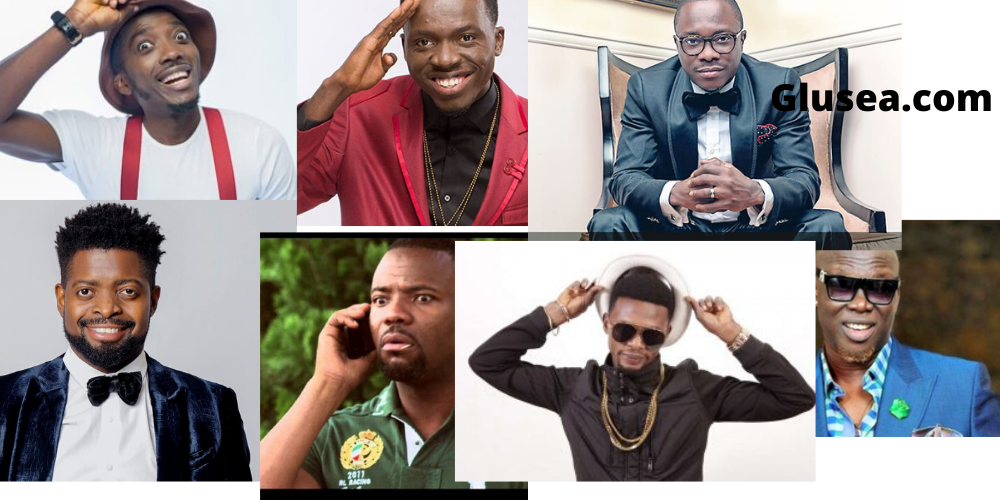 Top 10 Richest Comedians in Nigeria 2023: Nigeria is a hub of hilarious and rib-cracking comedians. Comedy in Nigeria is a well-established industry and a lot of the comedians are cashing in on their talents. Read on as we unveil to the top 10 wealthiest Nigerian comedians.

Akporor’s intense passion for success has made it possible for him to achieve great results. His real name is Jephthah Bowoto.

Akpororo began his brilliant career as a vocalist in the gospel genre. He had taken part in a lot of comedy contests. At the time, he never thought of comedy as a full-time ambition but eventually, he started to really enjoy it.

Gordons studied Integrated Science and graduated in 1998. Before venturing into standup comedy, he actually tried his hands in running a church in the capacity of a pastor.

With his church background, it is no wonder he always adds ‘hallelujah’ to his jokes and does more gospel music when he has the opportunity.

Gordons is one of the wealthiest Nigerian comedians

Mbenga is one of the richest comedians in Nigeria. He is the organizer of Laff Mattazz. He mostly organize shows for politicians.

Number 7 of Richest Comedians in Nigeria

Bovi began his career in April 2007,  starring in the sitcom Extended Family, which he also wrote and produced.

He got his big break as a stand-up comedian in Nite of 1000 Laughs organized by Opa Williams.

Bovi has become one of the most hilarious stand up comedians and he is making a lot of money from his talents.

Okay Bakassi is known in real life as Okechukwu Anthony Onyegbule. He is a comedian as well as an actor. Okay is one of the sort after comedians in Nigeria. It is reported that Okay charges up to N1 million per show. He is among the top-earning comedians

Julius Agwu is the MD/CEO of Reellaif Limited, music, and movie production company.

He is also an entertainment consultant and motivational speaker. He is the producer behind comedy shows like Crack Ya Ribs, Laff 4 Christ’s Sake and Festival of Love.

Agu is one of the most successful comedians in Nigeria.

I Go Dye whose real name is Francis Agoda is, without doubt, one of the richest comedians in Nigeria. He charges N1-1.5 million per show.

He is also involved in many endorsement deals including the United Nations Millennium Development Goals Ambassador.

Francis Agoda was born on April 4, 1979 in Abraka, Delta State, Nigeria. As a young child, he grew up at Okpara water side with his grand Mother, Queen Agnes where he saw the numerous challenges facing rural settlements in Nigeria.

This insight has motivated him to address some of these issues through his comedy and publications. A review of his creativity dates back to his elementary school days at Ighogbadu Primary School, and College of Commerce, Warri Delta State.

With a net worth of an estimated N1.8 billion, I Go Dye is among the richest comedians in Nigeria

Number 3 of Richest comedians in Nigeria

Bright Okpocha aka Basket mouth started his career as a rapper in 1994. He later quit rap and started comedy. He has become a household name not only in Nigeria but other African countries such as Ghana, Kenya, Among others.

He has organized popular stand-up comedy concerts like Basketmouth Uncensored across the globe.

Bright Okpocha was born in Lagos State but hails from Abia State, Nigeria. He completed his primary and secondary school in Apapa, Lagos and moved on to the University of Benin, Edo State to study for a degree in Sociology and Anthropology. He discovered his skill in drumming in 1991 followed by taking up rapping in 1994.

He then formed a group called “Da Psychophats” which had 7 members and they started going for shows and rapping in 1995, however they broke up before releasing any material. He went on to form another rap group known as “Da Oddz” with his brother Godwin and Muyiwa Ola-Phillips: they performed a couple of shows but didn’t break through as their brand of rap was not accepted in Nigeria.

Ayo Makun popularly called AY is one of the topmost earning entertainers in Nigeria. His movies “30 days in Atlanta” was an instant hit and contributed to his rise in earnings.

He came into the spotlight after being Alibaba Akporobome’s personal assistant and event manager.

AY has become a huge investor in stand up comedy and has influenced upcoming comedians through his AY “Open Mic Challenge”.

Ayo Makun attended Delta State University, Abraka, Delta State, Nigeria. He graduated (after spending nine years) in 2003 as a theatre arts student. A.Y also won other awards such as the most fashionable student on campus (1999 and 2000); best show-biz promoter (2001); the most celebrated student on campus (2001) and the Jaycee Club socio-personality award (2003).

Ayo Makun net worth is N2.5 billion making him one of the richest comedians in Nigeria

Number 1 of Richest comedians in Nigeria

Alibaba had a plan to study law but later realize he could be more successful by making people happy than defending them.

He has been refereed to as the king of Comedy.

With little precedent in Nigeria for stand-up comedians, Ali Baba persevered to professionalize his skills and carve a niche as an innovator and comedian for corporate and non-corporate events and by serving as a Master of Ceremony at many events.

Alibaba is the richest comedian in Nigeria today.