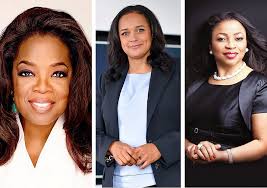 Who are the richest black women in the world?

She is best known for her talk show, The Oprah Winfrey Show, broadcast from Chicago, which was the highest-rated television program of its kind in history and ran in national syndication for 25 years from 1986 to 2011.

Dubbed the “Queen of All Media”, she was the richest African American of the 20th century and North America’s first black multi-billionaire, and she has been ranked the greatest black philanthropist in American history.

she was sometimes ranked as the most influential woman in the world.

In 2013, according to Forbes, her net worth had exceeded US$2 billion making her Africa’s first female US dollar billionaire.

Forbes described how dos Santos acquired her wealth by taking stakes in companies doing business in Angola, suggesting that her wealth comes almost entirely from her family’s power and connections.

In November 2015, the BBC named dos Santos as one of the 100 most influential women in the world.

She is the richest woman in Africa

Folorunsho Alakija is the vice-chair of Famfa Oil, a Nigerian oil exploration company with a stake in Agbami Oilfield, a prolific offshore asset.

Ngina Kenyatta, also known as Mama Ngina, was married to Jomo Kenyatta from 1951 until his death several decades later(she is his widow). She was originally born in Ngenda in the Kenya Colony in 1933.

Mama Ngina was Jomo’s fourth wife, and she was given as a “gift” from the Kikuyu to Kenyatta. The Kikuyu was Kenyatta’s ethnic group. Mama Ngina got her nickname as “Mother of a Nation” from this marriage. She had four children with Jomo.

She expanded her vast investments and holdings into business. She now owns plantations, hotels, ranches, and other properties. She made headlines when she converted to Roman Catholicism and began attending mass every Sunday with her children. She still resides in Kenya.

Sheila Crump Johnson is an American businesswoman, co-founder of BET, CEO of Salamander Hotels and Resorts, and the first African-American woman to attain a net worth of at least one billion dollars.

Johnson is team president, managing partner, and governor of the WNBA’s Washington Mystics, a position she earned before the 2005 season.

On May 24, 2005, Washington Sports and Entertainment Chairman, Abe Pollin, sold the Mystics to Lincoln Holdings LLC, where Johnson served as president.

Johnson is CEO of Salamander Hospitality, a company she founded in 2005.

is a Nigerian businesswoman and fashion enthusiast. She is one of the richest women in Africa.

She started her career with the audit department of the Central Bank of Nigeria before venturing into commercial activities in 1983.

Hajia Bola Shagaya is also the managing director of Practoil Limited, one of the largest importers and distributors of base oil in Nigeria, serving local lubricant blending plants. Her businesses also include huge investments in real estate, spanning across major cities in the country with over three hundred employees.

She is currently on the board of Unity Bank plc (formerly Intercity Bank) and has been for over eight years. She is also a member of the recently inaugurated Nepad Business Group – Nigeria.

Hajia Bola Shagaya is a patron of the Fashion Designers Association of Nigeria (FADAN), and a fashion and art enthusiast who supports and encourages the fashion and art industry. She also loves sports, especially polo.

On 22 July 2010, she was awarded by the President of the Federal Republic of Nigeria, Dr. Goodluck Ebele Jonathan (GCFR), the title of Member of the Order of the Niger (MON).

Robyn Rihanna Fenty is a Barbadian singer, songwriter, actress, and businesswoman who is known for embracing various musical styles and reinventing her image throughout her career.

Rihanna’s first fragrance, Reb’l Fleur, was released in January 2011.  The product became highly successful, according to Rolling Stone, Reb’l Fleur was a financial success and was expected to gross US$80 million at retail by the end of 2011.

Rihanna is a co-owner, with various other music artists, in the music streaming service Tidal. The service specializes in lossless audio and high definition music videos.

Read Richest women in the world

Rihanna and Benoit Demouy launched a beauty and stylist agency named Fr8me. The business based in Los Angeles was set up in order to assist artists in booking commercials, editorial shoots, ad campaigns and red-carpet appearances.

Wendy Appelbaum, daughter of Liberty Group founder Donald Gordon, is the Owner and Chair of De Morgenzon Wine Estate in Stellenbosch. Appelbaum admittedly did have an advantage in being the daughter of Donald Gordon. Having such a powerful, influential father was “almost like growing up in a business school”.

She inherited his flair and mind for business. However, her father is not responsible for her successes. “He certainly taught me a lot about business,” says Appelbaum, “but being a girl and growing up in the 1970s there was not much expect me to do anything. It was my choice to do something. So, I have always worked and I have always been busy.” She grew up wanting to challenge expectations, and that she did. Today, she is arguable the richest woman in South Africa.

Janice Bryant Howroyd (born September 1, 1952) is an entrepreneur, educator, ambassador, businesswoman, author, and mentor. She is founder and chief executive officer of The ActOne Group, the largest privately held, minority-woman-owned personnel company founded in the U.S. Howroyd is most well known as being the first African American woman to build and own a billion-dollar company

Serena Jameka Williams is an American professional tennis player and former world No. 1 in women’s singles tennis. She has won 23 Grand Slam singles titles, the most by any player in the Open Era, and the second-most of all-time behind Margaret Court (24).

The Women’s Tennis Association (WTA) ranked her world No. 1 in singles on eight separate occasions between 2002 and 2017. She reached the No. 1 ranking for the first time on July 8, 2002.

On her sixth occasion, she held the ranking for 186 consecutive weeks, tying the record set by Steffi Graf. In total, she has been No. 1 for 319 weeks, which ranks third in the Open Era among female players behind Graf and Martina Navratilova.