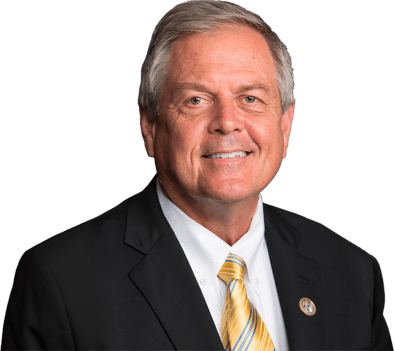 He was born in York County, South Carolina, and currently resides in Rock Hill, where he is a real estate developer at the Warren Norman Company, a business founded by and named after Norman’s father. He and his wife, Elaine, have 4 children and 17 grandchildren. He received a bachelor’s degree in business from Presbyterian College in 1975.

In 2004, Norman was elected to serve District 48 in the South Carolina House of Representatives, winning a three-way Republican primary outright with 52% of the vote.

After one term, Norman chose not to run for reelection so he could become the 2006 Republican candidate in an unsuccessful bid for U.S. Congress in South Carolina’s 5th congressional district against John Spratt.

In December 2016, President Donald Trump nominated Mick Mulvaney as Director of the Office of Management and Budget (OMB).

At the time, Mulvaney represented South Carolina’s 5th Congressional District in the United States House of Representatives. Shortly after this nomination, and in anticipation that Mulvaney’s seat in Congress would be vacated once he was confirmed to the OMB by the United States Senate, Norman announced his intention to resign from the South Carolina House of Representatives to run for U.S. Congress.

On May 16, 2017, Norman won a Republican primary runoff election against Tommy Pope by a margin of 0.6%, triggering an automatic recount per South Carolina state law.

Following that recount, the South Carolina State Election Commission certified Norman as the Republican primary winner on May 19, 2017. With 35,425 votes cast, Norman received 17,823, while Pope received 17,602, a 221-vote difference.

Representative Norman filed for re-election to the U.S. House of Representatives on March 16, 2020.  He secured the Republican nomination after facing no Republican challengers in the South Carolina primary election held on June 12, 2020.

Norman went on to defeat Democrat Mauricus “Moe” Brown in the general election held on November 3, 2020. Norman received 60.1% of the votes to Brown’s 39.9%.

Ralph Norman net worth 2022: Ralph Warren Norman Jr. is an American real estate developer and politician who has a net worth of $43 million. He is currently serving as the U.S. Representative for South Carolina’s 5th congressional district.