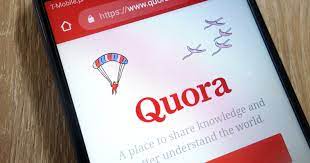 Quora is an American social question-and-answer website based in Mountain View, California. It was founded on June 25, 2009, and made available to the public on June 21, 2010. Users can collaborate by editing questions and commenting on answers that have been submitted by other users. The website was visited by 300 million users a month.

Quora was evolving into “a more organized Yahoo Answers, a classier Reddit, an opinionated Wikipedia” and became popular in tech circles.

In April 2014, Quora raised $80 million from Tiger Global at a reported $900 million valuation.

Quora was one of the Summer 2014 Y Combinator companies, although it was described as “the oldest Y-Combinator ever

Can you earn money from Quora?

Yes, it is true. You are paid a small share of any revenue that you earn for Quora when your question gets enough answers, external views, and ad impressions which are actually clicked on. But you have to be invited to join the Quora Partner Program (QPP) and accept the invitation and then ask questions regularly.

Quora is for more professional, serious answers. Quora is only for questions, where Reddit is for anything. You have joke answers on Reddit. Reddit also has things called “subreddits”, where Quora has tags.

Does Quora pay for asking questions?

Contrary to popular belief Quora does not pay for questions. They merely share any revenue they get from the ad impressions on the answer pages resulting from the questions that are asked.

What is the benefit of answering on Quora?

Generally, the advantage is the more answers you give, the more people are likely to see and like your stuff, upvote it, and follow you.

What are the disadvantages of Quora?

HOW I GOT PAID AFTER 5 GAMES CUT MY TICKET!