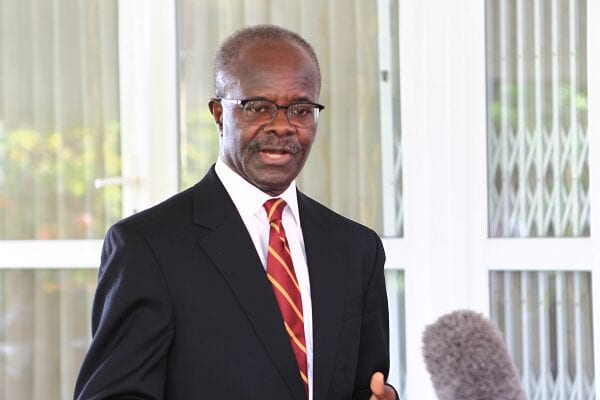 Paa Kwesi Nduom aka  Papa Kwesi Nduom, (born February 15, 1953) is a business consultant and politician. He is the Progressive People’s Party’s aspiring candidate for president. In 2008, he was the Convention People’s Party‘s nominee to contest the Ghanaian presidential election in December 2008. He was the member of parliament for the Komenda-Edina-Eguafo-Abirem constituency and had served as minister of state in various portfolios in the Kufuor’s government between 2001 and 2007. He was named after his father as Joseph Hubster Yorke Jr.

Paa Kwesi Nduom was born at Elmina in the Central Region of Ghana. He had his secondary education at the St. Augustine’s College in Cape Coast, where he obtained both the General Certificate of Education (GCE) Ordinary and Advanced Levels(“O” level and “A” levels).He proceeded to the United States where he obtained a Bachelor of Arts (Economics) degree at the University of Wisconsin–Milwaukee in 1975. He subsequently went on to pursue a Master’s degree in Management (1977) and a Ph.D (Service Delivery Systems) in 1982 at the same university.

Nduom started work as a life insurance underwriter with the North Western Mutual Life Insurance Company between 1975 and 1978. Over the next year, he worked with the Blue Cross Blue Shield of Wisconsin. In 1979, he joined the Milwaukee Metropolitan Sewerage District as a Budget and Management Analyst.  In 1981, he joined Deloitte and Touche as an associate consultant, rising to become a partner in the Milwaukee office of the firm by 1986. In 1992, he helped establish the Deloitte & Touche, West Africa Consulting.

He served as a board member for Fan Milk Ghana Limited, Edinaman Secondary School and the Ghana Heritage and Conservation Trust.

His active role in politics began in 1997 when he was elected as a member of the Komenda-Edina-Eguafo-Abirem District Assembly for the Akotobinsin Electoral Area.

In December 2000, he contested the Ghanaian parliamentary elections for the Komenda-Edina-Eguafo-Abirem constituency on the ticket of the Convention’s People’s Party (CPP),However,he lost to the incumbent MP, Ato Quarshie of the National Democratic Congress (NDC) by a margin of 2.6% of the valid votes cast. Two months later however, he was appointed by President John Kufuor as the Minister for Energy although he was not a member of the ruling New Patriotic Party. He also served during this period as the Chairman of the National Development Planning Commission.  During a cabinet reshuffle in April 2003, Nduom became the Minister for Energy.

18 months later, he again contested the Komenda-Edina-Eguafo-Abirem seat in the Ghanaian parliamentary election in December 2004 and this time around he won by 33.6 points (30981 votes to 15427). At the time, he served as the chairman of the Organising Committee of the CPP. Early in President Kufuor’s second term of office, Nduom became the Minister for Public Sector Reform.  He continued in this capacity till July 2007 when he resigned from government to seek his party’s nomination to stand as the CPP presidential candidate.

In December 2007, Nduom was nominated by the CPP to contest the December 2008 presidential election.  Nduom lost the elections, getting less than 1% of the vote. During the CPP party elections of 2011, Candidates reportedly supported by Paa Kwesi Nduom including then Chairman Ladi Nylander lost to newer candidates including Samia Nkrumah daughter of Ghana first president Kwame Nkrumah  Months later Paa Kwesi Nduom was accused by the Convention People’s Party of going against the party’s regulations. Paa Kwesi Nduom subsequently issued statements, first asking his supporters to stop working against the party, then later issued a statement which though did not talk of a breakaway, to all intents and purposes appeared to do so. In January 2012, Paa Kwesi Nduom formed his own party to contest the 2012 elections, the Progressive People’s Party. The CPP subsequently threw him out