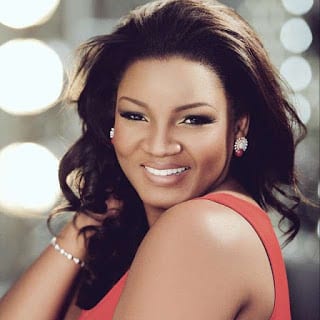 The beautiful actress was born on 7th February 1978  in Lagos State. She grew up in a family of five: her parents and two younger brothers.

She had a brief stint at Obafemi Awolowo University and completed her studies at Yaba College of Technology, where she studied Estate Management.

Omotola’s original ambition was to work in business management, while awaiting her results from university, she began modelling to earn a living.

Omotola was introduced to acting by accompanying a friend to an audition. Her first acting role was in the 1995 movie Venom of Justice.

She was given the lead role in the movie, which set the stage for a flourishing career in the Nollywood film industry.

she has starred in several blockbuster movies, including Games Women Play, Blood Sisters, All My Life, Last Wedding, My Story, The Woman in Me and a host of others.

Since her Nollywood film debut in 1995; the leading actress has appeared in 300 films, selling millions of video copies.

After receiving numerous high-profile awards, launching a music career, and amassing an enviable fan base, the press has revered the Screen Nation “Best Actress” as the “African Magic”.

Omotola, is known as a fierce human rights campaigner and her philanthropy efforts are centred on her NGO project, called the Omotola Youth Empowerment Programme (OYEP).

The undertaking brought hundreds of youths together for the Empowerment Walk and Convention. she lent her voice in (2010) to the Rewrite The Future Campaign of Save The Children UK

Her inimitable viewpoint earned her a famous column in OK! Nigeria Magazine.

The column is titled “Omotola’s Diary” and featuring writings directly from Omotola about her life and experiences.

On 5 November (2013), Omotola was honoured with the Ebony Vanguard Award at the Music Video and Screen Awards (MVISA) held in Birmingham.

On 9 November (2013), Oba Victor Kiladejo, the Royal king of Ondo Kingdom conferred Omotola with a chieftaincy title in her hometown of Ondo State.

The Nigerian accent ranked 5th on the list. The following year, Omotola was named one of the most influential people in the world by TIME magazine for their annual TIME 100 list. She appeared in the icons category.

In (2015),she was listed among the highest-grossing movie stars one has ever heard of; the listing included: Shah Rukh Khan, Frank Welker, Bob Bergen, Jack Angel, Mickie McGowan, Michael Papajohn, Martin Klebba, Clint Howard and Chris Ellis. This listing was compiled and researched by Yahoo