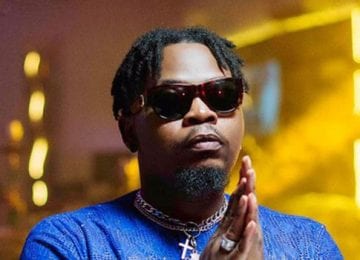 Olamide net worth: Olamide Adedeji known on stage as Olamide is a Nigerian hip hop artiste, he was born on 15th March, 1989. Olamide net worth 2023 is estimated as $14 million.

Olamide started his music career at the age of 11. He often said Music was his gift, his life, his hustle, and his world and therefore he has to explore it.

Olamide Adedeji was born in Bariga, Lagos State, on the 15th of March, 1989. He is the second of the three children of Pa Adedeji and his second wife, Ronke Osisanya Adedeji. Olamide has two siblings, TemmyGold and Eniola Olamilekan (who is also known as DJ Enimoney).

In 2010, Olamide released ‘Eni Duro’ under the Coded Tunes record label which he was signed unto at the time. The song received nationwide critical acclaim and instantly shot Olamide to limelight. In 2010, Olamide performed at The Hip Hop World Awards. He studied at Tai Solarin University of Education.  In 2011, he released his debut studio album titled Rapsodi.

Olamide Founded his own music label YBNL which means “Yahoo Boy No Laptop” after he resigned from Coded Tunes record label which he was signed unto initially.

Olamide’s debut album Rapsodi was released in 2011. Its lead single “Omo To Shan” charted on several radio stations in Lagos and across Nigeria. Olamide’s debut offering led to collaborations with numerous artists, including Wizkid, ID Cabasa, 9ice, Reminisce and D’banj.

Olamide’s second studio album YBNL was released in November 2012. Its production was handled by Tyrone (producer), Samklef, 2 Kriss, Pheelz and ID Cabasa. The album features guest appearances from Davido, Tiwa Savage, Kayswitch, Dammy Krane, Reminisce, Samklef, Buckwylla, Minus 2 and Base One. It was supported by the singles “Ilefo Illuminati”, “First of All”, “Stupid Love” and “Voice of the Street”

Olamide net worth 2023: It is estimated that Olamide net worth is over $ 10.5 million. Olamide revealed to the public on 18th of February, 2020 that his record label, YBNL Nation has signed a Joint Venture deal with international distribution company , Empire. He further stated that Fireboy DML, and any new artiste signed to YBNL Nation will join him to benefit from the deal.

Olamide started his career when he released the debut single, “Eni Duro,” in 2010. In the same year, he performed at The Hip Hop World Awards. He studied mass communication at Tai Solarin University but dropped out due to financial problems.

Adedeji is married to Adebukunmi Aisha Suleiman.They have two boys together, Maximilian Boluwatife and Tunrepin Myles. Olamide allegedly had a love child with Maria Okanrende,who was then working with Beat F.M.The name of the child is Asaiah Monife Maria.

Olamide is into a number f sponsorship deals with several companies including; Itel, Globacom, Guinness, Goldberg Lager  among others

Olamide has won 22 awards out of 55 nominations. He has also received millions of views on his digital streaming platforms.

How many House did olamide have?

According to Nigerianfinder, Olamide own three houses, one on the island, and two on the mainland. Olamide certainly knows how to enjoy his wealth too. His present luxurious house saw him part ways with a whopping sum of N38 Million, and it is located in the coveted neighbourhood of Lekki, Lagos.

What is Olamide first song?

Is olamide a billionaire?

Olamide net worth is currently purged at $14 million which means he is not yet a billionaire. But he is certainly a millionaire

Who is the richest between olamide and wizkid?

How old is olamide now?

Olamide was born on 15 March 1989, at the time of writing this article, Olamide is 32 years old