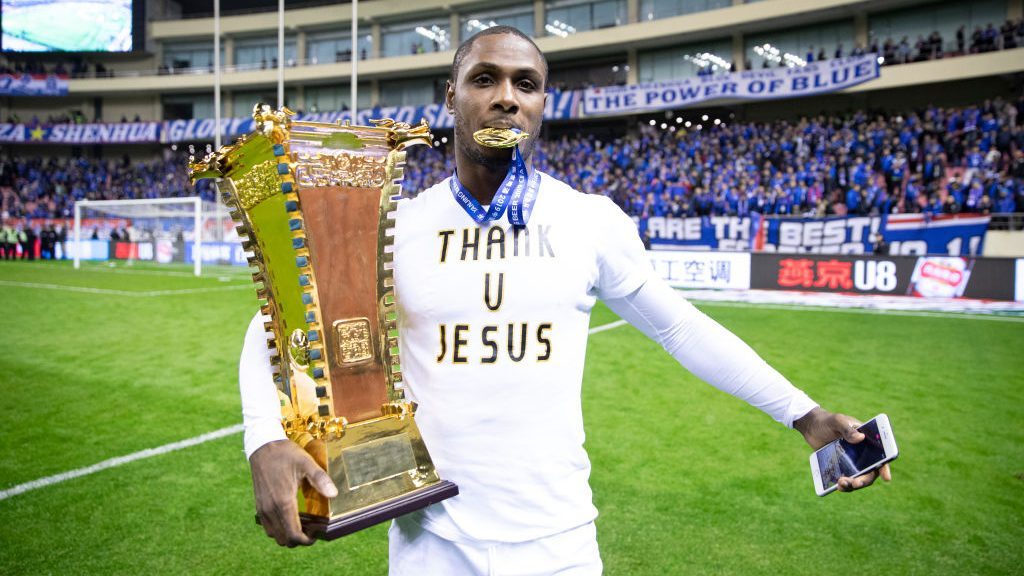 Odion Ighalo net worth 2023: Odion Jude Ighalo is a Nigerian professional footballer who plays as a striker for Saudi club Al Shabab. He is one of the only seven African footballers to have played for Manchester United

Odion Ighalo was born in Lagos on 16th June, 1989. He was brought up in Edo. Ighalo was discovered by FIFA agent Marcelo Houseman who recommended him to Atta Aneke, being subsequently taken on trial by Norway’s Lyn.

He scored six goals in 13 matches in his second year to help his team to the seventh position, and subsequently arose interest from other clubs in the country, with Brann reporting Lyn to the Norwegian Football Federation for unfairness in the negotiation process.

On 30 July 2008, Ighalo signed for Udinese in Italy, moving alongside teammate Jo Inge Berget and agreeing to a five-year contract.

He appeared rarely in Serie A in his debut season, scoring against Cagliari in a 6–2 home routing

Ighalo was loaned to Granada in summer 2009, as part of the partnership agreement between Udinese and the Spaniards. He scored 17 times in his first year and five in the second, as both seasons ended in promotion

Ighalo joined Watford on a season-long loan deal from Udinese, on 29 July 2014. He made his debut for the English club in the first round of the League Cup away to Stevenage on 12 August

On 31 January 2017, Ighalo joined Chinese Super League club Changchun Yatai for a reported £20 million. He ranked second in the scoring charts in his second season at 21, but his team suffered relegation

Ighalo transferred to Shanghai Shenhua on 14 February 2019. In March, he said he turned down a move to Barcelona the previous month

On 31 January 2020, Ighalo returned to the Premier League, joining Manchester United on loan until the end of the season.

In doing so, he became the first Nigerian player, and only the seventh African, to join the club.

After the move was confirmed, Ighalo revealed that he had taken a pay cut to make the move happen, calling it a “dream” to join the club he has long supported.

After three substitute appearances, Ighalo made his full debut for United in their Europa League round of 32 second leg match against Club Brugge on 27 February 2020.

He scored his first United goal, which was also his maiden goal in a European competition, as the hosts won 5–0.

Odion Ighalo made his first international appearance on 26th March, 2015 against Uganda. He was part of the squad that represented Nigeria at the 2018 world cup in Russia even though he never scored a goal.

Ighalo scored seven goals in the 2019 Africa Cup of Nations qualification campaign, the most by any player, to help Nigeria qualify for the finals in Egypt later that year

Odion Ighalo net worth 2023 is estimated at $20 million making him one of the richest footballers in Nigeria. It is reported that the striker is paid £49,000 weekly at Al Shabab.

Ighalo has often dedicates part of his wages for Nigerian charitable organisations to help impoverished children, schools and widows below the poverty line. He is a lifelong Manchester United supporter.

Ighalo has three children, two sons and one daughter. On 22 June, 2021, He was unveiled as an Ambassador of the National Principal’s Cup in Abuja by the Ministry of Youth and Sports Development, Sunday Dare

Ighalo is among the most successful footballers in Nigeria. He has earned a lot from footballer and does not shy from living lavish. The prolific attacker owns a mansion in Lekki- Nig

Thanks for reading the article about Odion Ighalo. Leave your comments and suggestions in the comment below.