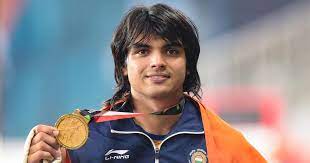 He is the only Javelin thrower that was able to break his own record and also set a new record during the Commonwealth and Asian Games in 2018. He was given the honor of becoming the flag bearer at the 2918 Asian Games opening ceremony and that also marked his debut at the Asian Games.  Why not read on to find out. Ore about his career and his net worth.

Neeraj Chopra was born on the 24th of  December 1997 in Panipat, Haryana, India. He is from the Ror Maratha family. He attended DAV College in Chandigarh.

Neeraj Chopra began his athletics career in 2016 where he participated in the 2016 IAAF World U20 Championships in Bydgoszcz in Poland where he won his second gold medal. Prior to his participation in the IAAF Championships, Neeraj first competed at the South Asian Games as a Javelin athlete, there he broke the Indian national record with an impressive 82.23m throw thereby winning the gold medal.

Neeraj was not fortunate enough to qualify for the Summer Olympics in 2016 irrespective of the awe-inspiring performances he put up at the Asian and IAAF world Championships.

After missing out on the 2016 Summer Olympics, Neeraj didn’t allow the disappointment the deter him as he further claimed another gold medal in 2017 when he competed in the Asian Athletics Championships with another record throwing of 85.23 m.

Chopra also went on to break another record at the Doha Diamond League with another throw of 87.43m deserving a standing ovation. Because of this impressive performance he was recommended by the AFI for the highest sports award in the country, thereby becoming the first and only track and field athlete to be recommended by AFI for the award. Following his triumph at the Gold Coast Commonwealth, he was given the Arjuna Award in 2018.

We bring you the highlights of Chopra’s career since 2016,which include his various medals at different competitions.

Apart from athletics, Neeraj Chopra also serves in the Indian army as a junior Commissioned Officer with the rank Naib Subedar

Neeraj Chopra net worth is estimated to be within $1-3 million. He has been supported and sponsored by JSW Sports and Sports Authority of India (SAI).