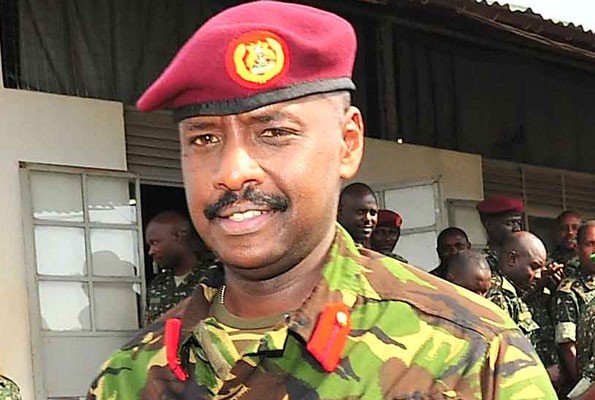 He is a Lieutenant General in the Uganda People’s Defence Force (UPDF) and is the commander of the Special Forces Group, which contains the unit known as the Presidential Guard Brigade responsible for providing security to the President of Uganda and to Uganda’s constitutional monarchs.

He was appointed into office by the president on 16th December 2020.

Keep reading to find more information about Muhoozi Kainerugaba’s net worth and all the other information you need to know.

Kainerugaba was bor on 24th April, 1974 in Dar es Salaam, Tanzania. He is the firstborn of his parents. Kainerugaba is married to Charlotte Nankunda Kutesa and together, they have three children.

As a child, Kainerugaba attended schools in Tanzania, Mount Kenya Academy in Nyeri Kenya, and Sweden.

After his father became President of Uganda, he attended Kampala Parents School, King’s College Budo for a while, and St. Mary’s College Kisubi, a residential middle and high school, located approximately halfway between Kampala and Entebbe. He graduated in 1994.

He was later admitted to the Egyptian Military Academy where he took both the company and battalion commanders courses. He also has attended the Kalama Armoured Warfare Training School, in Kabamba, Mubende District, Central Uganda.

In 2007 he was admitted to a one-year course at the United States Army Command and General Staff College at Fort Leavenworth, Kansas, graduating in June 2008. Following that, he successfully completed the Executive National Security Programme at the South African National Defence College

Upon his return to Uganda from Sandhurst in 2000, Kainerugaba was assigned to the Presidential Protection Unit as a second lieutenant. In 2001, he was promoted to the rank of major in the UPDF.

As a major, he became a brigade commander in the Presidential Guard Brigade. Following his graduation from Fort Leavenworth in 2008, he was promoted to the rank of lieutenant colonel and appointed Commander of the Special Forces Group in the Uganda People’s Defence Force.

On 16 May 2016 he was promoted to the rank of major general by President Museveni.

Museveni moved Muhoozi to the post of Senior Presidential Adviser for Special Operations on 10 January 2017. The move was generally viewed in light of the widespread belief that Museveni was preparing his son to eventually succeed him as president.

Observers suggested that, by appointing Muhoozi as a presidential adviser, Museveni sought to give his son some political experience.

Muhoozi is very active on social media platform Twitter where he often share his daily lifestyle with followers. He has over 350k followers.