HomeTop ListTop 20 Most Spoken Languages in the world 2023 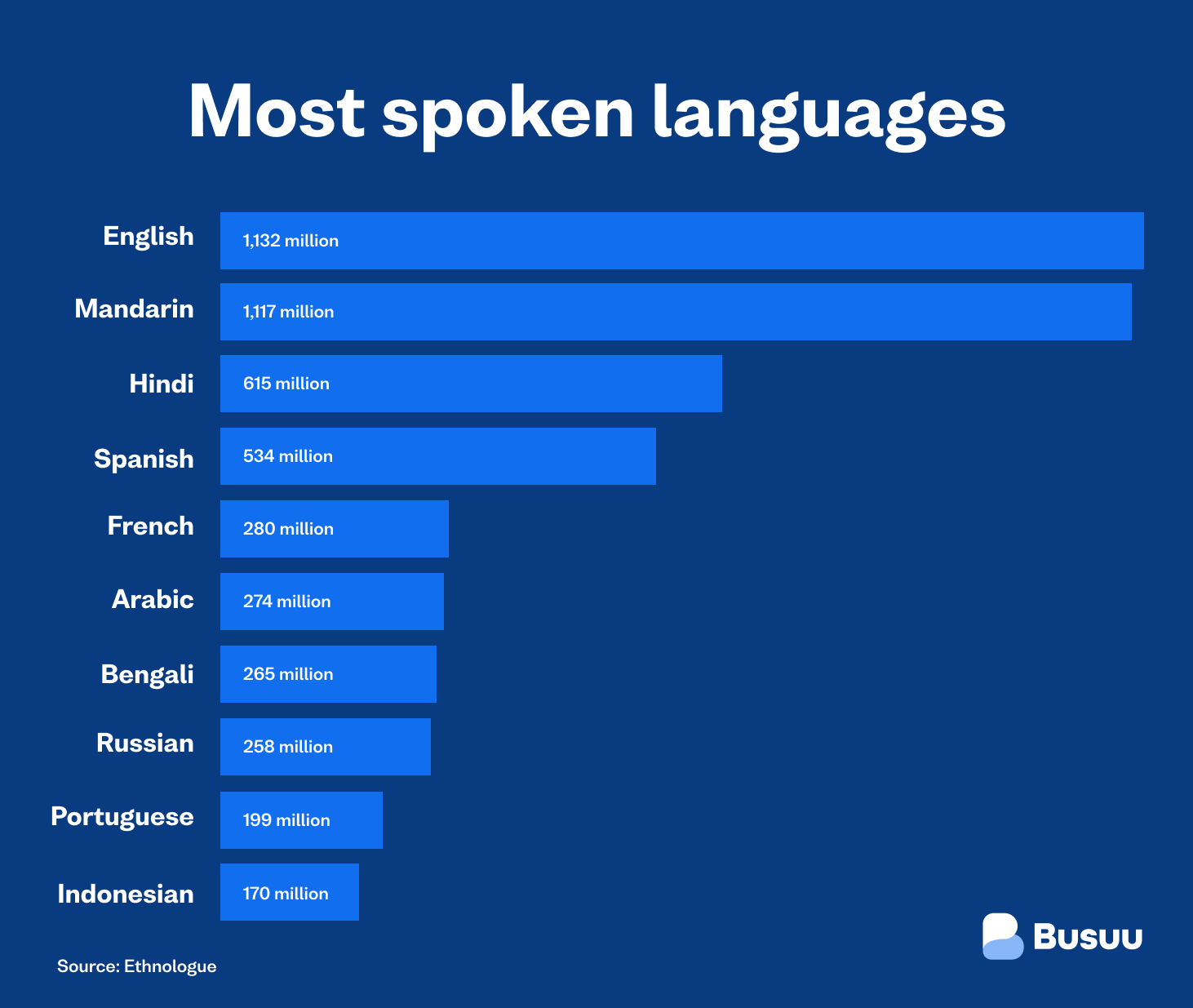 which are the most spoken languages in the world?

The gift of speech is what differentiates man from animals. We are able to communicate among ourselves through language.

Often times people get restricted when they get to places where they cannot communicate with the people because they speak different languages.

Read The Richest Betting companies in the world

The most spoken language in the world in English Language.

Why is English Considered a Global Language?

Most people consider English to be a global language because it is the one language that is spoken and understood by the majority of the population in almost every region of the world. What is a global language?

While there is no official definition, it refers to a language that is learned and spoken internationally by native and second language speakers (Mastin, 2011).

There are approximately 360 million native English speakers and almost twice as many speaking it as a second language, making English one of the topmost spoken languages in the world (Klappenbach, 2019).

English is undoubtedly in just about every sector whether it is in education, medicine, business, technology, tourism, communication, and so on. It is perhaps this worldwide acceptance and usage of the English language that propels it as an extremely essential global language.

These are the most spoken languages in the world.

There are more people who have learned English as a second language than there are native speakers. There are over 2 billion speakers of English.

English is the majority native language in the United Kingdom, the United States, Canada, Australia, New Zealand and the Republic of Ireland, and is widely spoken in some areas of the Caribbean, Africa, South Asia, Southeast Asia, and Oceania.

It is a co-official language of the United Nations, the European Union and many other world and regional international organisations. English accounts for at least 70% of speakers of the Germanic language branch of Indo-European.

Recent increased migration from Mandarin-speaking regions of China and Taiwan has now resulted in the language being one of the more frequently used varieties of Chinese among Chinese diaspora communities. It is also the most commonly taught Chinese variety.

Mandarin is the second most spoken language in the world

Hindi is the lingua franca of the Hindi Belt. It is also spoken, to a lesser extent, in other parts of India .

Outside India, several other languages are recognised officially as “Hindi” but do not refer to the Standard Hindi language described here and instead descend from other dialects, such as Awadhi and Bhojpuri.

Such languages include Fiji Hindi, which has an official status in Fiji, and Caribbean Hindustani, which is spoken in Trinidad and Tobago, Guyana, and Suriname.

Apart from the script and formal vocabulary, standard Hindi is mutually intelligible with standard Urdu, another recognised register of Hindustani as both share a common colloquial base.

Hindi is the fourth most-spoken first language in the world, after Mandarin, Spanish and English.

If counted together with Urdu, it is the third most-spoken language in the world, after Mandarin and English

Spanish is a descendant of Latin, and has one of the smaller degrees of difference from it (about 20%) alongside Sardinian and Italian.

Around 75% of modern Spanish vocabulary is derived from Latin, including Latin borrowings from Ancient Greek.

Alongside English and French, it is also one of the most taught foreign languages throughout the world.

Spanish does not feature prominently as a scientific language; however, it is better represented in areas like humanities and social sciences.

Spanish is also the third most used language on internet websites after English and Chinese.

Spanish is one of the most spoken languages in the world

French is estimated to have about 76 million native speakers; about 235 million daily, fluent speakers; and another 77–110 million secondary speakers who speak it as a second language to varying degrees of proficiency, mainly in Africa.

According to the OIF, approximately 321 million people worldwide are “able to speak the language”, without specifying the criteria for this estimation or whom it encompasses.

According to a demographic projection led by the Université Laval and the Réseau Démographie de l’Agence universitaire de la Francophonie, the total number of French speakers will reach approximately 500 million in 2025 and 650 million by 2050.

Arabic is a Semitic language spoken primarily across the Arab world. Having emerged in the 1st century, it is named after the Arab people; the term “Arab” was initially used to describe those living in the Arabian Peninsula, as perceived by geographers from ancient Greece.

Arabic is traditionally written with the Arabic alphabet, a right-to-leftabjad. This alphabet is the official script for MSA. Colloquial varieties were traditionally not written, however, with the emergence of social media, the amount of written dialects has significantly increased online.

Besides the Arabic alphabet, dialects are also often written in Latin from left to right or in Hebrew characters  with no standardized orthography. Maltese is the only colloquial variety officially written in a Latin alphabet.

With approximately 300 million native speakers and another 37 million as second language speakers, Bengali is the fifth most-spoken native language and the seventh most spoken language by total number of speakers in the world.

Bengali is also an official language in the West African nation of Sierra Leone, in honor of Bangladesh’s role in UN peacekeeping efforts in that nation

Russian is one of the most spoken languages in the world

Indonesian is the official and national language of Indonesia. It is a standardized variety of Malay, an Austronesian language that has been used as a lingua franca in the multilingual Indonesian archipelago for centuries.

Indonesia is the fourth most populous nation in the world, with over 270 million inhabitants—of which the majority speak Indonesian, which makes it one of the most spoken languages in the world.

Urdu is an Indo-Aryan language spoken chiefly in South Asia. It is the national language and lingua franca of Pakistan, where it is also an official language alongside English

Urdu is spoken by an estimated 70 million people and is among the most spoken languages in the world.

Japanese is spoken as a native language by about 128 million people, primarily Japanese people and primarily in Japan, the only country where it is the national language.

Japanese belongs to the Japonic or Japanese-Ryukyuan language family. There have been many attempts to group the Japonic languages with other families such as the Ainu, Austroasiatic, Koreanic, and the now-discredited Altaic, but none of these proposals has gained widespread acceptance.

German is a West Germanic language mainly spoken in Central Europe. It is the most widely spoken and official or co-official language in Germany, Austria, Switzerland, Liechtenstein, and the Italian province of South Tyrol.

It is also a co-official language of Luxembourg and Belgium, as well as a recognized national language in Namibia.

Outside Germany, it is also spoken by German communities in France, Czech Republic (North Bohemia), Poland, Slovakia , and Hungary.

Punjabi sometimes spelled Panjabi, is an Indo-Aryan language of the Punjab region of Pakistan and India. It has approximately 113 million native speakers.

The Javanese are an ethnic group native to the central and eastern part of the Indonesian island of Java. With approximately 100 million people, Javanese people are the largest ethnic group in Indonesia and the whole Southeast Asia in general

The Wu languages is a major group of Sinitic languages spoken primarily in Shanghai, Zhejiang Province, and the part of Jiangsu Province south of the Yangtze River, which makes up the cultural region of Wu. There are over 70 million estimated speakers of the language making it one of the most spoken languages in the world

Telugu is a Dravidian language spoken by Telugu people predominantly living in the Indian states of Andhra Pradesh and Telangana, where it is also the official language.

It is the most widely spoken member of the Dravidian language family and one of the twenty-two scheduled languages of the Republic of India.

It is one of the few languages that has primary official status in more than one Indian state, alongside Hindi and Bengali.

Telugu is one of six languages designated as a classical language (of India) by the Government of India.

urkish also referred to as Turkish of Turkey, is the most widely spoken of the Turkic languages, with around 80 to 90 million speakers. It is the national language of Turkey and Northern Cyprus. Significant smaller groups of Turkish speakers also exist in Iraq, Syria, Germany, Austria, Bulgaria, North Macedonia, Greece, the Caucasus, and other parts of Europe and Central Asia.

Korean is the native language for about 80 million people, mostly of Korean descent. It is the official and national language of both North Korea and South

Thank you for reading about the top 20 most spoken languages in the world. Leave your reply in the comments below.