RICHEST OLYMPIANS IN THE WORLD 2019

How to protect your bank accounts from fraud

7 Principles That Must Be Followed By Entrepreneurs

From the web ENTREPRENEURSHIP Self Improvement 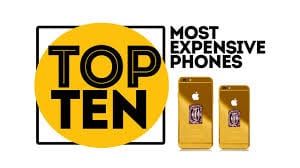 Glusea brings to you the most expensive phones in the world

Most Expensive Phones in the world

the most expensive phone in the world 2021 is Falcon SuperNova iPhone 6 Pink diamond with a price tag of $48.5 million.

US luxury brand FALCON has pushed the price tag for premium gadgets through the roof with its SuperNova iPhone 6 Pink Diamond range. Studded with a huge Pink Diamond on the back, these iPhone 6 models come in platinum, 24-carat gold and rose gold and cost a humongous $48.5 million apiece.

If you don’t want to loosen your purse strings so much, you can also go for the ‘cheaper’ models in this range. The Orange Diamond and Blue Diamond iPhone 6 models cost $42.5 million and $32.5 million, respectively.

Coming second on the list of most expensives phones in the world 2020 is the iphone 4s Elite Gold.

The bezel is handmade from rose with approx 500 individual flawless diamonds which total over 100ct.The rear section is formed using 24ct gold with the added touch of its 24ct gold Apple logo and 53 diamonds. The main navigation is made from gold which holds a single cut 8.6ct diamond. Also included (not shown in picture) is a rare 7.4ct single cut Flawless pink diamond which can replace the existing one. The chest is made from solid Platinum with polished pieces of original Dinosaur bone from the T-REX along with rare stones such as Opal ,Pietersite, Charoite , Rutile Quartz ,Star Sunstone .The handset is 64gb and limited edition of only 2 to be ever made.

The bezel is handmade from rose with approx 500 individual flawless diamonds which total over 100ct.

The rear section is formed using rose gold with the added touch of its rose gold Apple logo and 53 diamonds. The main navigation is made from platinum which holds a single cut 7.4ct pink diamond. Also included (not shown in picture) is a rare 8ct single cut Flawless diamond which can replace the pink one.

The chest which houses this unique handset is made from a single block of Granite , in Imperial Pink with the inner lined with Nubuck top grain leather , which weight is a massive 7kg.The handset is 32gb and limited edition of only 2 to be ever made.

The rear logo in solid gold has 53 flawless diamonds amounting to 1ct and the front navigation button is home to a single cut very rare diamond at 7.1 cts.

The chest which houses this unique handset is made from a single block of Granite , in Kashmir gold with the inner lined with Nubuck top grain leather , which weight is a massive 7kg.

The handset is 32gb ,factory (legal) unlocked for worldwide use and can be updated with new firmware when available without freezing up.

More on Most Expensive Phones in the world

Its seems like the financial crisis over the world really has not affected to the Austrian jeweler Peter Aloisson,because he created a record for himself by designing one of the world’s most expensive phones Apple iPhone 3G Kings Button.

Read the Most Expensive cars in the world

The Apple iPhone 3G Kings Button’s main operating button is integrated with high quality 6.6 carat diamonds, this impression itself of the phone is very attractive.

This exquisite phone is made of solid 18-carat yellow gold, white gold and rose gold. It e flaunts a white gold line encrusted with a total of 138 brilliant cut diamonds of the best quality.

One of the world’s most expensive phone is the GoldVish Le Million which has a price tag of $1.3 million. It is made out of 18k white gold and it’s encrusted with 120k of diamonds. There were only three of these ever made

For a cool $1 Million dollars you can own one of the most expensive phones in the world.

Part of a limited edition series of only three units; each phone comes with its own unique number engraved on the back.

The phone is made from an impressive, one hundred and eighty grams of gold and black diamonds, each at 45.5 carats.

If you like your phone to have different textures, then the back panel is made from a precious wood of a two-hundred-year-old African tree.

Also, every key on the phone has been beautified with manually polished 32-carat gem sapphires.

More on Most Expensive Phones in the world

The Revolution is part of a thirty-two unit series and is one of the most expensive phones to have ever been created.

The phone’s shape is noticeably different from most, which adds to its exclusivity quite a bit.

On top of that, it’s made from white and pink gold, fine leather, diamonds and has a sapphire glass display case.

If that wasn’t enough, the phone also has a detachable analog watch by Fredric Jouvenot.

What makes this mobile phone so very expensive? Well, it is made by using 439 rubies. The highlight of Vertu Signature Cobra mobile phone is its unique design that includes a snake figure wrapped around the edges. The eyes of the snake are decorated with two valuable emeralds.

Vertu was a British-based manufacturer and retailer of luxury handmade mobile phones, established by Finnish mobile-phone manufacturer Nokia in 1998. In October 2012, Nokia sold Vertu to private equity group EQT VI for an unspecified amount, but retained a 10% share.

According to a Chinese website GizChina, the Signature Cobra comprises of 288 parts that are assembled in UK. So far, only 8 units of the Vertu Signature Cobra have been manufactured.

As for the specifications, the Vertu Signature Cobra packs a 2-inch QVGA display with a resolution of 240 x 320 TFT LCD display which is protected by sapphire crystal. The device offers 2GB of RAM and 16GB of internal storage and comes with a removable battery and a talk-time of 5 and half hours.

Vertu Signature Cobra is among the top 10 most expensive mobile phones in the world.