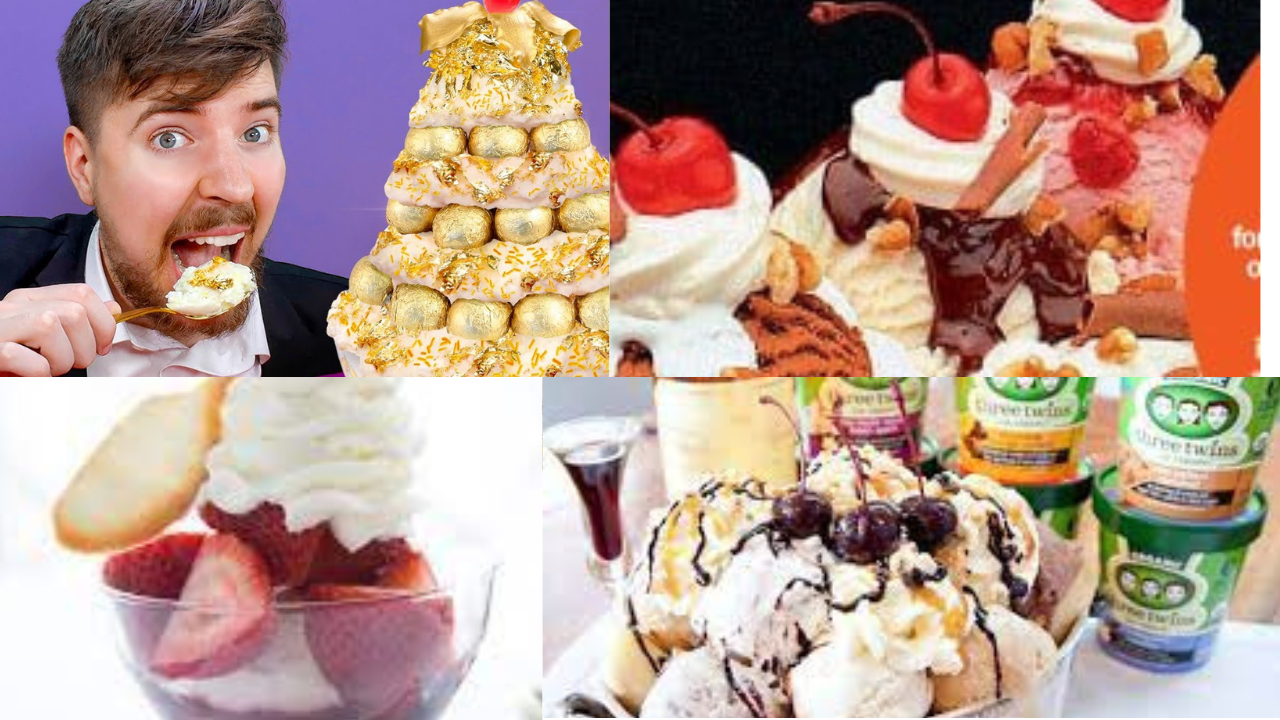 what are the Most Expensive Ice Creams in the world?

The most costly ice creams in the world combine lavish ingredients with unusual flavors and are not made for the cheapskate crowd. I know you are already curious to know more about these expensive ice creams and I’m going to give you a list of these ice creams right away.

Read Richest bodybuilders in the world

Most Expensive Ice Creams in the world

here are the most expensive ice creams in the world

The Strawberries Arnaud which can only be found in New Orleans is the most expensive ice creams in the world.

If you’re wondering how the Strawberries Arnaud can justify its $1.4 million price tag, consider that it comes with a 4.7-carat pink diamond ring that belonged to Sir Ernest Cassel and would make a perfect engagement gift (as long as you’re part of the super-rich elite, of course). If the ice cream makes you thirsty, you can wash it down with some $24,850 Charles X crystal liquor.

Even though the most expensive ice cream in the world doesn’t have any exotic ingredients like vanilla bean or black truffle, it nonetheless impresses because of its simplicity and a sparkly pink diamond ring.

Although this $100,000 ice cream sundae is not YouTuber Jimmy Donaldson, aka Mr. Beast,’s priciest giveaway ever, it is still among the most costly desserts ever sold. it is one of the Most Expensive Ice Creams in the world

Mr. Beast had already sampled $500 cheeses and $50,000 steaks before chowing down on the massive ice cream sundae, so it was only a matter of time before he moved on to sweets.

Mr. Beast didn’t even want any of the ice cream, so he offered his seat to another fan so they could share the enormous sundae. In fact, he tipped the chef who made the ice cream sundae $20,000 for a job well done.

When Frrrozen Haute Chocolate ice cream came out for the first time in 2007, it was the most expensive ice cream in the world, selling for a shocking $25,000.

Like the Opulence Sundae, this dessert is a specialty of New York’s Serendipity 3 restaurant, but at a far higher price (which came drizzled in gold leaf and chocolate truffles).

So, what other dessert treats besides Frrrozen Haute Chocolate ice cream can you anticipate being served alongside the ice cream?

Twenty-eight different cocoas, including fourteen of the most costly cocoas in the world, go into the ice cream’s delicate blend to create a really one-of-a-kind frozen chocolate delicacy.

This decadent sundae is made with milk, ice cubes, whipped cream, and shavings of truffle ice cream made from the world’s most costly truffle, the La Madeline au Truffle.

As if the ornaments weren’t enough to satisfy your sweet tooth, the frozen chocolate delicacy is served in a glass goblet lined with edible 23-karat gold. Around the goblet is a ring of 18-karat gold and white diamonds that add up to 1 carat.

The dessert is served on a gold spoon encrusted with white and chocolate-colored diamonds, which, if you’re considering ordering it, you’ll be happy to know, customers are welcome to take home with them.

With the help of New York’s Euphoria, a high-end jewelry boutique, this exquisite dessert using exotic, hard-to-source ingredients from Africa and South America was made.

more on the Most expensive ice cream in the world 2022

We go back to Three Twins for the Absurdity Sundae, which is more than just a single scoop of ice cream and is accompanied by an airline ticket.

The proceeds from the sale of the Absurdity Sundae go to an African organization whose mission includes protecting the natural world, continuing the Three Twins’ tradition of using the world’s most expensive ice cream sundaes to do good.

There is not much difference between the Absurdity Sundae and the Three Twins Ice Cream Sundae, both of which may be purchased from the same establishment for the low, low price of $3,333.

First-class airfare to Tanzania and a tour of the mountain that provided the ice for the ice cream come as part of the supplementary fee.

In addition to the Absurdity Sundae, you are also provided with five-star lodgings so that you may rest in luxury (though unfortunately, you are not permitted to keep the gold spoon with which you ate it).

The cost of Absurdity Sundae is $60,000 and its among the most expensive ice creams in the world

Three Twins Ice Cream in California has been known for its organic ice cream since it opened in 2005. In 2008, it made the “World’s Most Expensive” Three Twins ice cream sundae.

The rare dessert wines used to create the syrups for this $3,333 ice cream sundae are the Chateau D’Yquem, a 1960s vintage port, and the German Trockenbeerenauslese.

The sundae is topped with a banana split.

The folks at Three Twins Ice Cream don’t stop there; they also accompany your ice cream dish with a vintage 1850s gold spoon.

Better still, Three Twins Ice Cream gives back to the community by contributing one-third of its profits to a land trust, making it a luxury treat with a unique conservation twist.

If you feel bad about splurging on a $1,000 tub of ice cream, you may rest easy knowing that the money went to a land trust that is working to improve the management and conservation of local areas of natural beauty.

If music-lovers book the cellists ahead of time, they can have a live performance during dinner at Three Twins

It was the most expensive ice cream ever sold when the Bear Extraordinaire was released to New York City’s elite for $1,500.

Wakabayashi is also well-known for her unique scone recipes and other delicious desserts.

The ice cream foundation is made with Madagascan vanilla beans and is coated in white chocolate and painted with cocoa butter.

The egg is perched atop a bed of crumbled black truffles, Manjari dark chocolate, and Valrhona Gold cocoa nibs.

Edible gold and silver leafing, as well as fondant butterflies and sugar strands that look like angel hair, add to the luxury of the hibiscus champagne sauce and citrus meringue.

When it comes to ice cream, the Golden Opulence Sundae is at the top of the price tier.

Developed by the chefs of New York’s Serendipity 3 restaurant, it’s the first ice cream ever to cost more than $1,000.

Dessert is similarly pricey because it is made to order and features vanilla from Madagascar blended with vanilla bean ice cream.

Pieces of Chuao chocolate, which are crafted from cocoa beans sourced from the coast of Venezuela, are mixed with chocolate syrup, which is melted Amedel Porcelana, the most expensive chocolate in the world. More chocolate truffle bits, candies, almonds, marzipan cherries, and ice cream are piled on top for good measure. The cost of Golden Opulence Sundae is $1000

Work up your appetite with the Mauboussin Mega Sundae which will set you back $1,000http://t.co/F1CIFVtvST pic.twitter.com/xk36Flbo9R— Accouter (@AccouterDesign) April 24, 2015

One-of-a-kind sorbet is used to create the Dom Perignon rose champagne, and 24-karat gold foil is used to encase the brownies. The sundae comes with a unique keepsake and is served in a large martini glass.

If you finish the entire plate, the waiter will hand you a black box containing a white gold, black steel, and diamond Mauboussin ring for $590. Mauboussin, a renowned French jeweler, has been operating since 1827. The cost of Mauboussin Mega Sundae is $1000

The Victoria ice cream dessert at the Pavilion restaurant in the Langham hotel costs $1,000. To make this sweet treat, you will need vanilla and chocolate ice cream, cognac, and Hennessy VSOP. The dessert is adorned with a gold leaf and 24-karat gold dust.

The ice cream masterpiece is crowned with whipped cream, hot fudge, caramelized golden peanuts, dark chocolate crunch, and salted caramel. To complement the dessert, which is served in a Wedgewood crystal bowl that is yours to keep, you will be given a bottle of Dom Perignon champagne.

In addition to the Wedgewood Crystal Bowl and bottle of Dom Perignon 2003 that come with this ice cream, you can also take the bowl home with them.

You won’t just find vanilla ice cream in this sweet; instead, you’ll get a blend of three different kinds of vanilla, including fruity Tahitian vanilla, spicy Mexican vanilla, and Madagascar-bourbon vanilla.

Black Diamond ice cream is available at the Scoopi Café in Dubai. The owner of the café claims that it took five weeks to find the perfect blend of ingredients.

The ice cream is made with a variety of unusual ingredients, like saffron threads and black truffles. The ice cream’s base is flavored with vanilla beans from Madagascar, and the dessert’s finishing touch is a leaf of edible 23-karat gold.

You get to retain the special plate Versace designed to display the Black Diamond.

Given Dubai’s penchant for yellow metal, it’s no surprise that the Black Diamond ice cream flavor comes with a glittering gold sprinkle.

The customer receives their food in a Versace bowl and uses a Versace spoon, both of which are adorned with ostentatious details and can be taken home.The cost of Black Diamond is $817, it is also among the most expensive ice creams in the world.

Customers are wowed by rare black truffles, gourmet French macarons, and other pricey ingredients in the world’s most expensive ice creams.

From the extravagant ice cream treats of the Aria Resort to the wonderfully named Absurdity Sundae, the sky’s the limit when it comes to how much you can spend on ice cream.

Those who place a high value on their food will appreciate the opulence of the world’s priciest ice creams.

Thank you for reading about the most expensive ice creams in the world. leave your reply in the comments below

Top 20 Richest Bodybuilders in the world