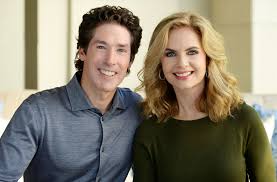 Pastor Victoria Osteen is the wife of Joel Osteen, one of the esteemed preachers in the world today. His messages have brought hope and uplifting in the lives of many. In this article, Victoria shares powerful thoughts on living in love. Read to find out how..

I once heard about a husband and wife who were so upset after a big argument that they refused to speak to each other. That night, not wanting to be the first to break the awkward silence, the man left a note on his wife’s side of the bed that read, “wake me up at 6 o’clock in the morning.”

The next morning, by the time the husband woke up, it was already 8 o’clock. Furious, he roared, “Where is she?” and was about to chew out his wife when he found a note on his side of the bed: “It’s six o’clock; wake up.”

If we’re going to live in love, we have to learn to forgive one another. The Bible says, “Do not let the sun go down on your anger, but instead, forgive. And above all things, put on love.”1 That means: Above having your own way, above your own agenda, choose to put on love.

The apostle Paul prayed in Ephesians 3:17 that we would be “rooted and established in love so that we would have power together with all the saints.” When we choose to walk in love, we have the power of God in our lives, as well as healthier relationships. Read Richest Actresses in the world

We should always look for the best in each other. That’s one of the things I love about Joel. I used to think that he didn’t see the things that people did wrong. Then I realized: It’s not that he doesn’t see them; he chooses not to focus on them.

That’s what Jesus taught. One day a group of Pharisees brought a woman to Him who had been caught in adultery. The Law said that she should be stoned, but Jesus didn’t condemn her. Instead, He said, “Those of you without sin, go ahead; you throw the first stone.”

The woman’s accusers began to look within themselves. Then, they walked away.

We can all throw rocks and point out each other’s faults, but we need to make allowances for one another. We don’t know what some people have been through. We don’t know the pain and heartache they’ve experienced. When the woman’s accusers had all slipped away, Jesus told her, “Neither do I condemn you; go your way; from now on sin no more.”3

Let’s learn living in love and see the best in everyone. A house divided will fall. That’s why it’s so important to keep peace in your home. Be the first to apologize. Be quick to forgive.

Someone once asked me if Joel and I argue. Of course, we disagree, but you can’t argue with someone who won’t argue with you, and Joel won’t argue! He’s made up his mind that we’re going to walk in love, because that is where the power is. At times, Joel and I have said, “All right, we can’t see eye to eye on this, so we’re just going to agree to disagree.”

I can’t help it if he’s wrong sometimes!

When Joel and I got married, I like my own way, and when I didn’t get it, I wasn’t happy. Then God spoke clearly to me: Victoria, if you don’t change the way you’re acting, you’re going to change the man you married.

Well, that got my attention, because I didn’t want to change Joel’s personality. I love Joel. That’s why I married him. I knew that I had to be willing to make some changes.

In many relationships, after time, people neglect to walk in love. One day, they realize that their hearts have changed. You hear it all the time: “We just grew apart.”

Joel and I remind ourselves often that God brought us together. He’s got a good plan for our marriage. You need to remind yourself that God has put that person in your life, and He’s got good things in store. If you will do your part by being kind, respecting one another, treating each other the way you want to be treated, God will do His part, and you can live in love!