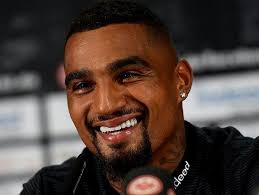 Kevin Prince was born on  6th March 1987 in Germany to a Ghanaian fatherv and a German mother. He is the elder brother of  Jerome Boateng.

Boateng started his club career with the club Reinickendorfer Füchse in early 1994 at age six prior to signing for Hertha BSC on 1 July 1994 at the age of seven, first playing for them to 31 July 2007 when he was 20 years old.

Boateng signed a four-year contract with Tottenham Hotspur in July 2007 for a reported £5.4 million, securing him ahead of UEFA Cup holders Sevilla.

His success at the club was limited, and he was loaned to Borussia Dortmund in January 2009 for the remainder of the season.

On 17 August 2010, Boateng transferred to Italian Serie A club Genoa on a three-year contract for €5.75 million

On 30 August 2013, Boateng was transferred to German Bundesliga club Schalke 04 for a €10 million transfer fee on a four-year contract due to expire in June 2017.

However, On 11 May 2015, Boateng, alongside Sidney Sam and Marco Höger, was suspended indefinitely from the club in the aftermath of a defeat against 1. FC Köln as a result of poor behaviour which claimed to have led to the club’s poor domestic performances.

Boateng returned to Ac Milan after his contract with Schalke 04 had ended. He later signed for spanish side Las Palmas, Eintracht Frankfurt, Sassuolo, Barcelona (loan), Fiorentina and now on loan to Beşiktaş

Boateng is a keen singer and dancer,  and has said that his singing and dancing idol is Michael Jackson.

He enjoys choreography, and singing. As such, Boateng performed a dance routine involving Michael Jackson’s trademarked Moonwalk for a packed-out San Siro of 88,000 spectators upon Milan celebrating their 18th Scudetto, and sang an a cappella live on beIN Sports television to celebrate their eighth birthday.

In August 2018, he released a rap song under the alias PRIN$$ Boateng named “King” on the World Star Hip Hop channel