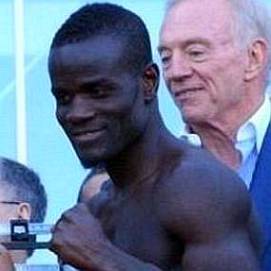 Glusea.com brings to you Joshua Clottey net worth and Biography

Joshua Clottey is a Ghanaian former professional boxer who competed from 1995 to 2019 and held the IBF welterweight title from 2008 to 2009.

Born in Accra, Ghana, Clottey now lives in The Bronx, New York. At the peak of his career, he was notable for his exceptionally durable chin, and was never stopped in any of his five losses. his recent fight which he won was with opponent Azziz Mponda from Tanzania. Clottey won by TKO in round 8.

As a child in his native Ghana, Clottey had a passion for football, a sport that was also played by his father. Clottey moved and spent a few years in the United Kingdom then later to the United States.

Clottey rose to prominence by winning his first twenty fights, including 14 by knockout. His performance set him up to fight Carlos Baldomir, in a title defense by Baldomir for the WBC international welterweight title.

Clottey was winning until the 10th round, where he was penalized two points for an intentional head butt. After another clash of heads, Clottey was disqualified.

Clottey rebounded from the controversial loss by winning the African Boxing Union welterweight title in his next fight. He then rolled off a 10 fight winning streak highlighted by his first win on American soil and capture of several minor welterweight and middleweight titles.

Joshua Clottey net worthOn June 13, 2009, Clottey faced Miguel Cotto in New York City at Madison Square Garden for the WBO welterweight title. Cotto dropped Clottey in the first with a jab. Cotto was cut in the third round by an accidental head butt. Clottey’s combinations throughout the fight gave Cotto problems. Cotto emerged the winner with a controversial split decision

Clottey had great fights in his career, but the one fight that will forever remain in his memory was the fight against Manny Pacquiao.

on March 13, 2010 Joshua Clottey battled  Manny at the Dallas Cowboys Stadium following the disagreement on terms of a proposed boxing match between Manny Pacquiao and Floyd Mayweather Jr. Clottey lost to Pacquiao by unanimous decision.

On August 23, 2013, Star Boxing announced Clottey’s return to boxing as they have signed the former champion to a contract. Clottey returned to the ring on September 14, 2013, when he faced Dashon Johnson. Clottey defeated Johnson via unanimous decision.

Where is Joshua Clottey now?

Clottey spends most days in the old neighborhood. At night, he retreats to East Legon, a high-end district where he owns several properties. The former IBF world welterweight champion is a family man now.

Clottey has a balanced combination of size, speed, stamina, power, endurance, ring savvy, and a solid chin. In addition, he is an accurate, efficient puncher with effective countering ability.

His defensive skills are top-notch; he stands upright while holding his arms and gloves high to protect himself, which is similar to Winky Wright’s defensive stance.

Joshua Clottey net worth is estimated at $11 million. He is one of the great athletes from Ghana to have chalked international success.