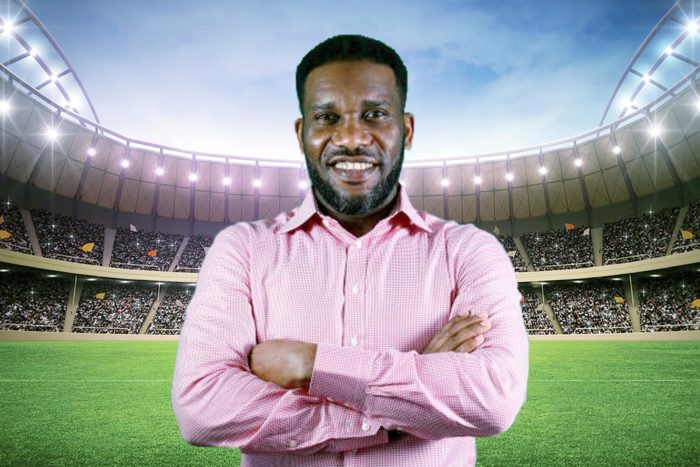 Jay Jay Okocha is a Nigerian former professional footballer who played as an attacking midfielder. A quick and skillful playmaker, who is considered as the best Nigerian and one of the best African players of all time. Jay Jay Okocha net worth is $15 million According to Celebrity worth.

The name Jay-Jay was passed down from his elder brother James, who started playing football first; his immediate elder brother, Emmanuel was also called Emma Jay-jay, but the name stuck with Okocha instead.

Okocha began playing football on the streets just like many other football stars, usually with a makeshift ball.

His professional football career started with Enugu Rangers in 1990.

Later that year, he went on holiday to West Germany, the country that had just won the 1990 FIFA World Cup, so he could watch German league football.

His friend Binebi Numa was playing in the Third Division for Borussia Neunkirchen, and one-morning Okocha accompanied Numa to training, where he asked to join in.

The Neunkirchen coach was impressed with Okocha’s skills and invited him back the next day before offering him a contract.

A year later, he joined 1. FC Saarbrücken, but stayed only a few months with the 2. Bundesliga side before a move to the  Bundesliga with Eintracht Frankfurt.

Okocha joined Eintracht Frankfurt in December 1991, where he linked up with many well-known players including Ghanaian international striker Tony Yeboah and later Thomas Doll.

He continued to shine for the German side, one highlight being a goal he scored against Karlsruher SC, dribbling in the penalty box and slotting the ball past goalkeeper Oliver Kahn even going past some players twice. The goal was eventually voted goal of the season.

Okocha joined Turkish club Fenerbahçe for approximately £1 million following Eintracht Frankfurt’s relegation to the 2. Bundesliga. In his two seasons with the team, he amassed 30 goals in 62 appearances.\

In 1998, French side Paris Saint-Germain spent around £14 million to sign Okocha, making him the most expensive African player at the time. During his four-year stint with PSG, he played 84 matches and scored 12 goals.

From PSG, Okocha went on a free transfer to English side Bolton Wanderers in 2002. He also played for Hull City.

Okocha made his official debut for Nigeria in their 2–1 1994 FIFA World Cup Qualifier away loss against Ivory Coast in May 1993.

It was in his second cap and home debut that he became a favorite with the Nigerian supporters. With Nigeria trailing 1–0 against Algeria, in a match they needed to win, he scored from a direct free-kick to equalize

In 1994, he was a member of both the victorious 1994 African Cup of Nations squad. And the World Cup squad who made it to the second round before they lost in a dramatic match against eventual runners-up Italy.

In the 1998 FIFA World Cup hosted by France, Okocha played for a disappointing Super Eagles side who failed to live up to expectations again reaching the round of 16, albeit with less impressive performances save for their 3–2 opening win against Spain.

This did not destroy interest in Okocha, who had entertained fans with his trademark skills and dribbles and went on to be named in the squad of the tournament.

Jay Jay Okocha net worth is estimated at $15 million by Celebrityworth.