HomeSocial and LifestyleHere Are The Reasons Why Bitcoin Is So Volatile!

Here Are The Reasons Why Bitcoin Is So Volatile! 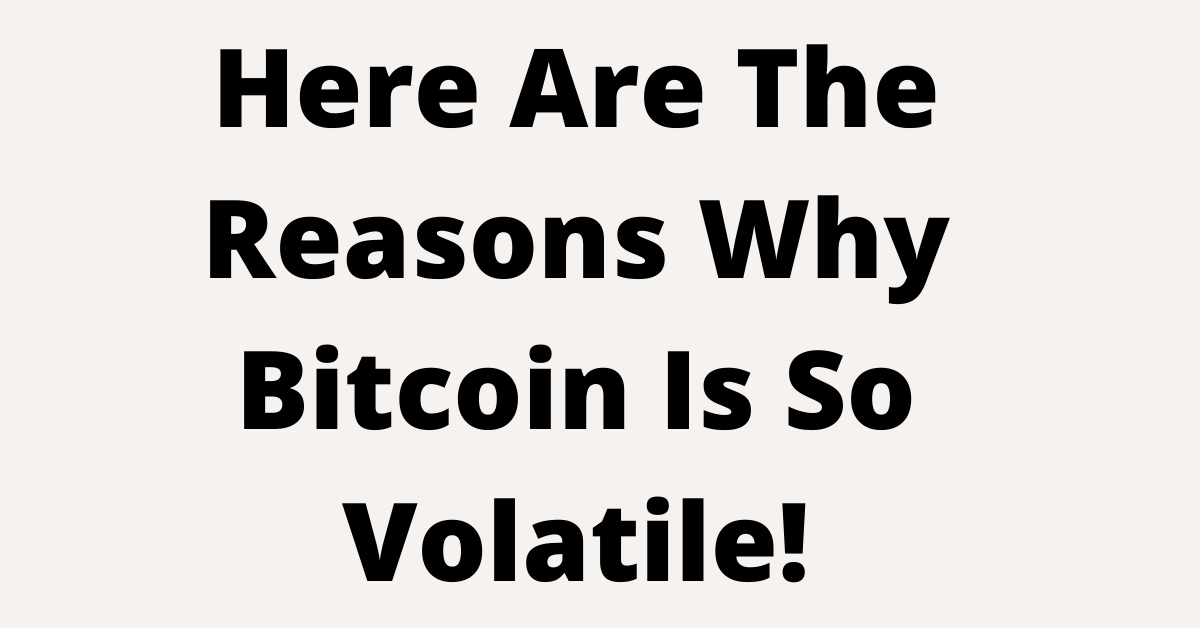 Bitcoin is always on the news because of its fluctuating prices. The volatility is the thing that makes this investment exciting as well as risky at the same time. Some people are interested in investing in bitcoin, but they hesitate because they think it can prove dangerous because of the volatility. First of all, you should be clear that bitcoin is not the only highly volatile cryptocurrency.

There are other cryptocurrencies also that have shown some wild volatility in the prices. Do you know what are the causes behind the volatility of bitcoin? If not, then you have come to the right place. Let’s explore the reasons which cause the fluctuation in the prices of bitcoin.

We all know that bitcoin is free from the control of the government. All the other kinds of asset classes have some controlling agencies. But in bitcoin cryptocurrency, there is no power to anyone to control this crypto.

They are not controlled by the government officials like the fiat currency. In most countries, there are no rules and regulations for bitcoin. It means that this digital currency is free from any laws, which is why no one is there to control its value.

The high volatility of bitcoin is because of its unregulated nature. However, the anonymity Bitcoin offers to its users is one of the main things that attract investors to invest in this digital currency.

If they start to introduce regulations, then the interest of people might decline in this cryptocurrency. Because decentralization is the main characteristic of bitcoin, it has a big fan following worldwide. If you want to invest in bitcoin, then visiting bitcoinx is the best option.

You might not be aware of the fact that bitcoin is of limited supply. Yes, you have heard me right, and there are only 21 million bitcoins available that can ever be created. But since bitcoin is one of the most popular digital currencies, the demand and supply forces influence the price of this unique digital currency.

Some people are still not very clear about the price determination of bitcoin. If you are also one of them, you should know that bitcoin is a digital asset whose price is entirely based on demand and supply.

The supply of bitcoin is limited, so some entities who have significant holdings in this cryptocurrency can later influence the value of the bitcoin by selling or purchasing more bitcoin.

It is the thing that adds up to the complete volatility of bitcoin. You need to know that according to the experts, it is the reality that bitcoin is more volatile than any other investment option.

Still, the risk of volatility also comes with its plus points. It means that if bitcoin can see a significant loss in its value, it has equal probabilities of having a significant rise in its value which will help you make high profits. In such cases, the volatility of bitcoin is not a danger.

The bitcoin investors mainly don’t get affected by the volatility of bitcoin because they are used to it, and they know that the returns of investing in this digital currency can prove to be very much higher.

One of the initial reasons for the volatility of bitcoin is its novelty. You need to know that every new concept takes some time to settle down and be accepted by the people.

The same concept also applied to that of bitcoin. It has been more than a decade since the launch of bitcoin, but it is still a young technology. The main thing is that bitcoin has gained global popularity in the last few years, but it is still not recognized as equity or gold.

The increasing adaptability and the maturity of any market go side by side. It is the reason when Elon musk stated that his Tesla company would not accept the payments made from the digital currency, then the value of bitcoin started to decline.

But when earlier Tesla announced that it would start accepting bitcoin payments, then its value increased. Such kinds of influencing personalities can add a lot to the volatility of bitcoin by making controversial statements and taking such actions.