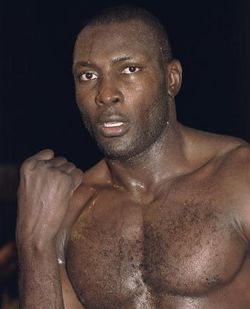 Henry Akinwande net worth: Henry AKINWANDE is a British professional boxer of Nigerian-descent, who competed as a heavyweight boxer from 1989 to 2008, claiming many titles including the European and WBO heavyweight title. During his fighting days, AKINWANDE was lethal and formidable, always flooring his opponents. Through out his career, he suffered only 4 defeats, recording 30 wins via knockout. Read on to see more exciting facts about the life and net worth of boxing Legend Henry Akinwande.

Henry Akinwande net worth is $1 million.

Henry Adetokunboh Akinwande was born in Dulwich, London, England, on October 12,1965 to Nigerian parents. At age 4,Akinwande returned to Nigeria where he spent his teenage years, with his parents. He later went back to England at the age of 21, where he began his boxing career.

Henry Akinwande started his boxing career at amateur level, joining the Lynn Amateur boxing ub in Camberwell. He defeated fellow Nigerian heavyweight boxers like Herbie Hide to claim the ABA Heavyweight title. He further represented Great Britain in SOUTH Korea, in the heavyweight division at the Olympic Games which took place in 1988.

Henry Akinwande had his professional bout in 1989 against Carlton Hadley in London. He then went on a winning streak, winning his first 18 bouts which included a victory via knockout over J.B Williamson who was former World Light Heavyweight Champion.

Henry Akinwande challenged Schultz to a bout for the European heavyweight title, but before now they had already fought in 1992 which ended in a draw. This time Henry Akinwande emerged the winner through a unanimous decision by the three judges that were present. The fight came after Akinwande defeated James Thunder of New Zealand to claim the Commonwealth title. He defended the title twice against Biagio Chinese and Mario Scheisser. This was the period he went invincible, defeating future heavyweight champions like Tnoy Tucker, Gerard Jones, Brian Sargent, Johnny Nelson and Frankie Swindell.

After the WBO World Heavyweight Title was left vacant by Riddick Rowe, Akinwande challenged JEREMY Williams of United States of America, to the title and later won in the 3rd round. He fended the title against Alexander Zolkin and Briton Scott Welch. After defeating the two title contenders, Henry Akinwande went on to win 8 more fights. Before then he had lost to Lenox Lewis in 1997 and also was out of game in 1999 as he was diagnosed of hepatitis B.

Akinwande also lost the second time, this time in 2001 to Oliver McCall. He later went on to lose his fourth fight in 2008, which resulted in his retirement. Indeed, Henry had an amazing career, he had a total of 55 fights, won 30 via knockout, won 18 by decision, drew 1 and lost 4.